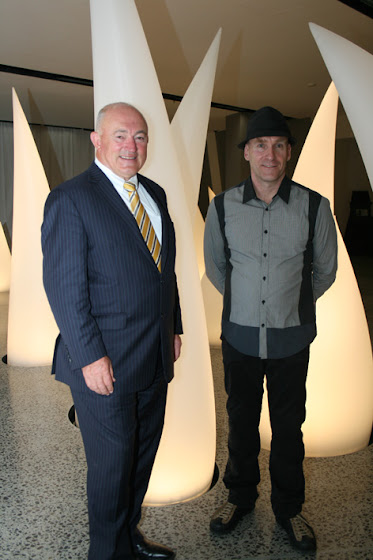 ActewAGL is celebrating the 10th birthday of the organisation.

ActewAGL celebrates its 10th anniversary by officially opening its new headquarters on 40 Bunda Street and unveiling a brand new artwork titled The Journey.

The commission, designed and fabricated by globally renowned, Canberra-based artist Robert Foster of Fink and Co. in collaboration with Frost* Design and Coolon Lighting Pty Ltd, occupies the ground floor of ActewAGL House.

The work consists of 37 major sculptural forms, emerging from the polished concrete floor to become sinuous light-filled shapes named “Ossolites”. The Ossolites are so-named because of their relationship with the concept of “oscillating”, or swinging between points with rhythmic movement. The name also references the Latin word for bone (“osso”) and the word “light.

The Ossolites are programmed to create dramatic sequences of light, colour and movement throughout the installation.The forms contain thousands of environmentally sustainable LED lights supported by specially designed power sources. Movement sensors allow the work to interact with people passing through the space.

The piece is getting rave reviews from everyone who’s seen it so worth checking out if you’re in Civic.

Would have preferred a discount on my bill.

beg to differ – his aluminium work is often sculpture. haven’t seen this work yet, but am keen to do so…

He is a good silversmith, but he is not a sculptor – and it shows.

glad to know this is why we keep paying premiums on our electricity bills, to fancy up their foyers

Feel free to pick another electricity retailer if you don’t like ActewAGL.

I’ve seen no cash but I did see an ACTEW worker with the arse torn out of his pants. Was he one of the semi naked slaves ?

glad to know this is why we keep paying premiums on our electricity bills, to fancy up their foyers

Which makes it all the more remarkable that Frost were involved as well. It would be interesting to know more details about the collaboration.

Yes, but from some of the stuff I have seen come out of his workshop, it is a pity he isn’t a little more focussed on quality control.

This art thing is catching.

I hear he has his own personal photographer that follows him around to all his social engagements.

Catherine O'Neill Cooney - 23 seconds ago
Who cares, it’s capitalism gone mad, average wages don’t support a decent rental these days let alone the Australian Drea... View
JC - 18 minutes ago
And in other news Monday follows Sunday. Oh and BTW the same thing, rising house prices and rates linked to lane value happen... View
chewy14 - 3 hours ago
This is a strange comment. Firstly, it assumes that the local ACT government is fully in control of house prices in the ACT w... View
Community 33

brianf - 1 hour ago
The stats I've seen suggest about 90% of accidents between cars and 'vulnerable road users' (cyclists and pedestrians) are th... View
paservank - 3 hours ago
...or get rid of all the cars? (an equally stupid and self-centred idea) View
Community 24

Jamii Lee - 3 hours ago
So you’d rather the building sit unused for a unspecified amount of time just so a few people (would love to know the figur... View
Lifestyle 13

Capital Retro - 5 hours ago
The service provider was massively subsidised by the public purse via the virtue signaling government. View
News 16

Stuart Green - 6 hours ago
Scott Bell Thats obvious, they'll light us up for more on the other 4 days... View
show more show less
*Results are based on activity within last 7 days

@The_RiotACT @The_RiotACT
Fancy a gooey, sticky, chocolate pudding? How about a cleansing ale or hearty casserole? @CanberraSCC members can help local charities like @karinyahouse with every bite https://t.co/ogAbd4GfVL (2 hours ago)