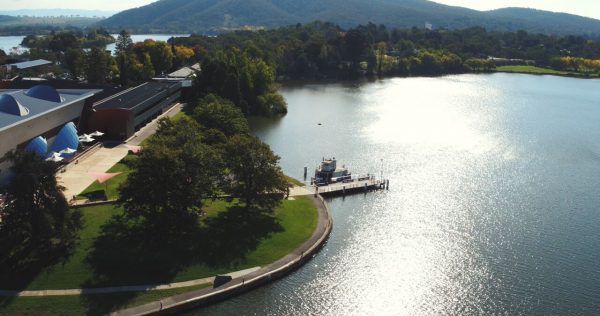 Existing interactions between the National Museum, AIATSIS, the ANU and Canberra’s CBD were weak due to physical constraints and a lack of coordination in the Acton Peninsula precinct, National Capital Authority chief executive Malcolm Snow said today, as he joined representatives from those bodies and the ACT Government to unveil a jointly created draft plan to fix the problem.

The plan is now available online for public consultation over the next six weeks, providing Canberrans with the final piece in the puzzle to being able to better understand how development in Lake Burley Griffin’s West Basin, including the ACT Government’s City to the Lake project, may interact with its surroundings. 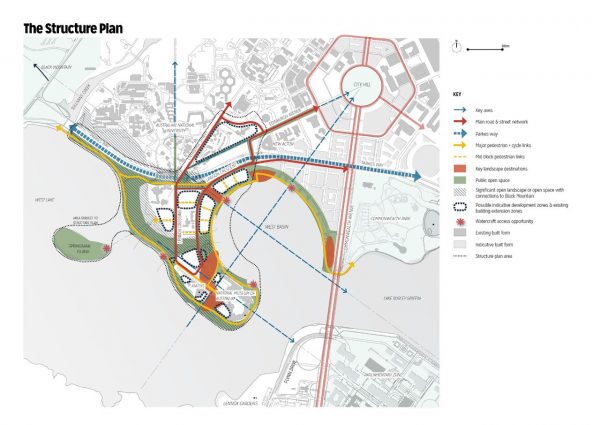 Mr Snow said the peninsula’s institutions shared an ambitious aspiration for the precinct and that an appropriate urban design framework was essential to make the most of its assets.

“These institutions and the diverse activities they support are significant both at a local and national level,” Mr Snow said.

“However, the existing connections and interactions between them are currently weak.

“The draft plan seeks to address this by resolving a range of physical constraints and proposing new opportunities to coordinate the long-term development of the precinct.”

He said the outcome would be an internationally recognised precinct that showcased Australia’s national identity.

National Museum Director Mathew Trinca agreed that connections with the city centre and access to the precinct generally could be improved, noting this would provide relief during blockbuster exhibitions and major events, when parking had at times presented an issue.

He was more positive about the peninsula’s current status than Mr Snow, though.

“We’ve known for a long time that the National Museum and indeed our great colleagues at the Australian National Institute of Aboriginal and Torres Strait Islander Studies [have known], that we jointly sit on Canberra’s best site,” Dr Trinca said.

“Make no bones about it, this is a jewel in the crown of the Canberran firmament, and I think the peninsula is really coming into its own as one of the capital’s premier destinations.”

Community consultation on the Acton Peninsula Precinct Draft Structure Plan will be open for six weeks, ending at midnight on Tuesday, June 13. Public information drop-in sessions with NCA planning staff will be held from 11am to 2pm on Thursday, May 18, Saturday, May 20 and Tuesday, May 23 at the National Museum of Australia. The draft plan and information about how to provide feedback is available on the NCA’s website at www.nationalcapital.gov.au.

Given it will take some months for feedback to be considered by all parties before they collaborate on a final plan, there is currently no date for the commencement of development.

See below for our earlier Facebook LIVE coverage as representatives of the peninsula’s key institutions unveiled the plan this morning. Dr Trinca and Mr Snow were joined by AIATSIS Acting Chief Executive Officer Craig Ritchie, ANU Executive Director of Administration and Planning Chris Grange and City to the Lake Director with the ACT Government Nicholas Holt.

Louise O'Donnell - 2 hours ago
Yes that is the repository, or storage area. The files (paper, digital, and so forth) need to be stored somewhere safe and en... View
Lori J Tas - 9 hours ago
Bet the ALP wont do anything either 😒 View
Geoff Richardson - 9 hours ago
Maybe instead of wasting half a billion taxpayer dollars on an unwanted upgrade to the war memorial, those funds could be bet... View
Food & Wine 11

Melissa Wells - 6 hours ago
Ben was one of my teachers at Melba High in 2004/5. Such a genuine and caring teacher! Had no idea about this, but when is a... View
Sophie Stoddard - 10 hours ago
Taught me maths for a bit. 👌🏻👌🏻 View
Rory Wadwell - 10 hours ago
Stephen Wadwell you were very fortunate to have him as a mentor for your refereeing. View
News 67

Kimmy Hunter - 6 hours ago
Crystal Darmody if you live in Canberra they don’t accept you... View
News 61

Shirley Walsh - 7 hours ago
Congratulations Ricky View
Mario Vozella - 8 hours ago
Nice work mate 👍 View
Katrina Garrety - 8 hours ago
A very big congratulations to u Rick and ofcourse Kaylie too ..u no how the saying goes ..behind every great man is an even g... View
Opinion 11

HiddenDragon - 9 hours ago
So the light rail terminus (and the pretty lights in the trees) haven't done the trick with all that "activation" and "enlive... View
JC - 9 hours ago
60m a year (cost of lightrail) doesn’t go that far. Some seem to think it’s a magic pudding. View
May Mac - 10 hours ago
If the Sydney and Melbourne Buildings could be constructed in separately owned sections which created the beautiful buildings... View
Community 44

Shane McMinn - 10 hours ago
Quangers, or the Socialist Republic Of Queanbo.. View
MERC600 - 11 hours ago
Quangers has it all over Canberra these days. No graffiti , grass mowed and no rubbish floating about. The other article on t... View
Community 4

chewy14 - 12 hours ago
JS9, I agree and it's this sort of rent seeking that does a disservice to what they are trying to achieve. It's actually also... View
show more show less
*Results are based on activity within last 7 days

@The_RiotACT @The_RiotACT
Alan Tse went from a career in a heavy drinking corporate culture to co-founding a Canberra startup that provides beverage options for those who choose not to drink alcohol https://t.co/RUUOzWV8eB (7 hours ago)

@The_RiotACT @The_RiotACT
Critics say a 10-year funding crisis is coming to a head at the National Archives. An open letter to the Prime Minister pleads for help to save irreplaceable national assets https://t.co/IOZh6De8k4 (10 hours ago)