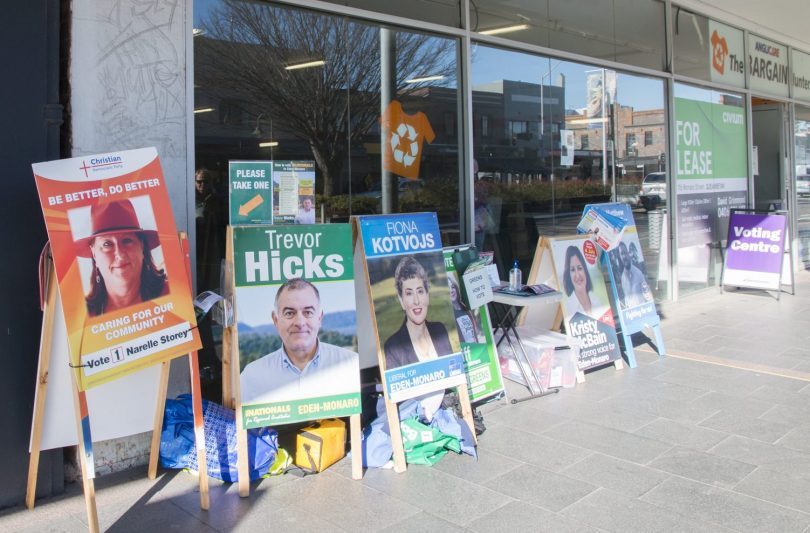 Placards for the 14 candidates in the Eden-Monaro by-election at an early polling centre in Queanbeyan. Photo: Dominic Giannini.

UPDATED: JULY 9 9pm: Liberal candidate Fiona Kotvojs has conceded defeat in the Eden Monaro by-election. In a statement, Dr Kotvojs says that “with only 1,000 to 2,000 votes still to count, the result for Eden-Monaro is now clear.

“I have spoken with Kristy McBain and congratulated her on being elected as the Member for Eden-Monaro. I wish Kristy and her family all the best as she takes on this new role”.

Describing 2020 as “a horrific year for all of us”, Dr Kotvojs thanked her supporters and called for unity across the electorate as communities struggle to recover from multiple disasters.

“To each person who took the time to consider and cast an informed vote (regardless of who it was for), you have contributed to our democratic process. May we never take it for granted, may we continue to value and uphold it, and may we always do the same for each other.

“As you can appreciate, I put much on hold for the campaign, so I’m looking forward to returning to some normality and spending time with my husband, family and friends. As I said, this community shaped who I am and I will always fight for it, but right now I have some fencing to do”, she said.

The Australian Electoral Commission (AEC) has now completed its counting of all the postal votes in its possession, putting Labor’s Kristy McBain ahead of the Liberals’ Fiona Kotvojs by 719 votes.

However, the AEC has not officially declared the election – despite McBain claiming victory the following day – as the number of postal votes that have not been returned exceeds the current margin between the top two candidates.

Around 5,000 postal ballots were counted on the night, but an additional 7,000 postal votes have been received by the AEC since election night.

More postal ballots are sent out that are returned at each election and residents have 13 days after the election to return their postal ballots, meaning an official result may not be known until next Friday (17 July) at the latest. 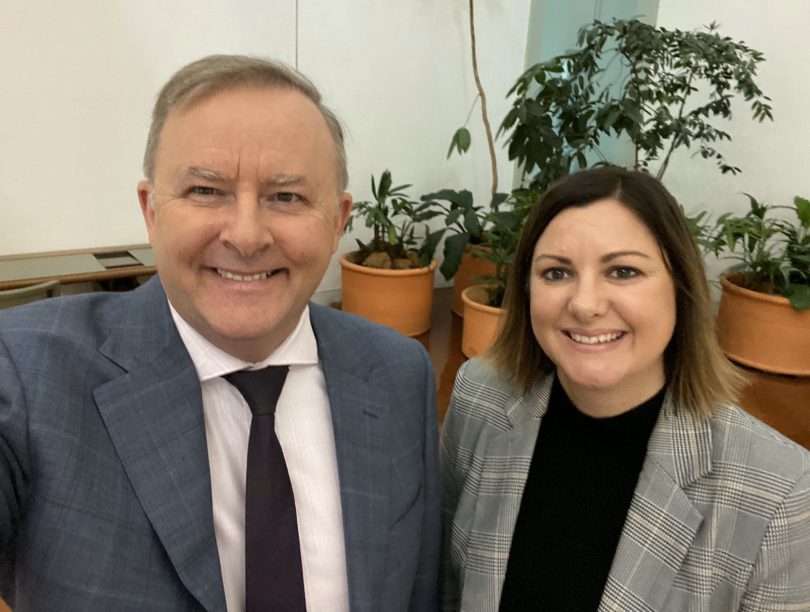 Australian Electoral Officer for NSW, Warwick Austin, said it was normal to be waiting for votes this late into the count.

“We will count the new postal votes that we receive in batches as they arrive but it is fair to expect that there won’t be movement on the tally room every day,” he said.

It is expected that postal votes will be received progressively over the next week but at a slower rate than in the first few days after polling day, the AEC said.

A full breakdown of the votes can be found on the AEC Tally Room website.

Labor deciding to accept victory and accept the preference votes from the Shooters, Fishers and Farmers party would imply or give the impression that Labor supports the policies of relaxing gun control.

That’s a long bow there. Are you should know preferences in house of reps are made by the voter and there is no concept of accepting preferences.

But if you believe that then I guess you thought that because the Libs got in with One Nation preferences that then Libs support One Nation policies. As well as all the other right wing fringe parties.

They do know, but it suits their narrative to distort the truth.

And as it was announced before the election that the S,F&F Party would be sending their preferences to Labor, by extension the Greens also support those policies.

If not they could have sent their preferences elsewhere.

It’s amazing how flexibly morality is for political parties.

But all boxes had to be numbered, so it was the voters who determined the preferences, not the parties. This is not the same as when we voted on the tablecloth and vote above the line – the latter case is where the party preferences come into play.

jwinston - 39 minutes ago
Good luck with that. I recommended “Planet of the Humans” on a thread months ago and the silence has been deafening. I gu... View
Futureproof - 2 hours ago
There's no such thing as zero emissions. Every item you buy has had emissions to create it. The Chinese made windmills, the C... View
TimboinOz - 3 hours ago
I agree. We two are retired, we do not drive our car more than three times a week. We bought it, very slightly used in early... View
Opinion 37

Timothy Bailey - 2 hours ago
The AWM and "ANZAC" are very powerful icons. Difficult to argue with or question. The whole 'Beersheba - last great cavalry c... View
BlowMeDown - 7 hours ago
I think you've just summarised the Labor/Greens strategy re promoting light rail by derailing, as they did, the bus system in... View
Community 23

TimboinOz - 3 hours ago
A Forester is even better. More ground clearance makes it's reach / range into bushland a good bit better. And it's just as g... View
Peter McDonald - 4 hours ago
Michael Bradshaw and it’s EV. View
Julie Macklin - 4 hours ago
The difference here was the Subaru Outback I was following got over that gully...on three wheels with one corner in the air,... View
News 1

ChrisinTurner - 3 hours ago
I had to look up stealthing on Google. Seems to have changed the whole intent of the word "stealth". The mind boggles with th... View
Business 61

Acton - 9 hours ago
An attempt to use a drone with barking dog noises to round up sheep ended in hilarious failure on Clarkson's Farm, now showin... View
News 65

Concerns about the wait time for a simple surgery to remove her son's tonsils, adenoids and grommets has led to...
Best of Canberra 195

When did the word 'consultation' become the beginning and end of a genuine voice from the community on major policy...
Motoring 24

It's higher off the ground than any of its rivals. It has an all-wheel-drive system and driving modes for deep...
Opinion 28

Here we go again, Raiders fans. The 2021 NRL season started with so much expectation for the Green Machine, but...
Community 23

@The_RiotACT @The_RiotACT
While residential buildings shone in this year's ACT Architecture Awards, some iconic designs from around the city were also recognised including the famed circular bus shelters https://t.co/Nr8YkxRK5Y (1 hour ago)

@The_RiotACT @The_RiotACT
Ben Williams rose to the top of his field as a world-leading football referee - and even officiated at one of the craziest games ever played. Tim Gavel explains a journey that began at age 15 in Kambah https://t.co/eyMRbZboiX (4 hours ago)