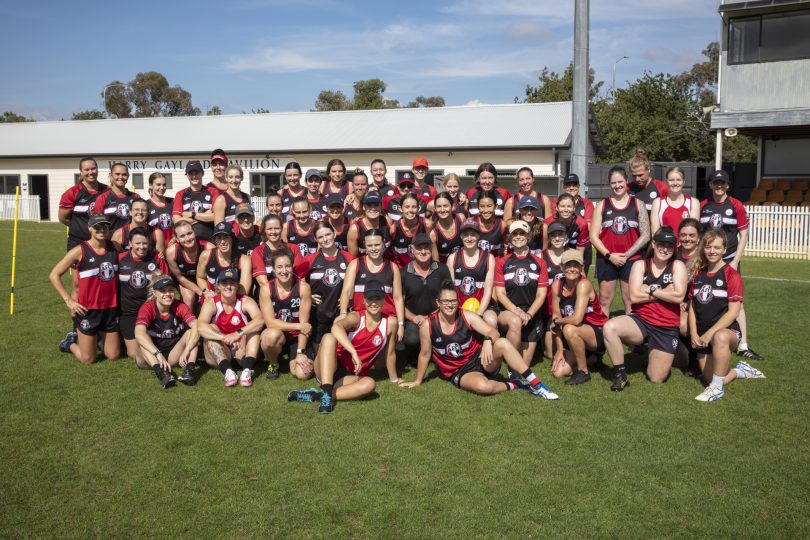 Ainslie Football Club has started a new program to provide an opportunity for women who are keen to pursue their passion for playing Australian rules football.

The Women’s Development Program has been introduced by the club this year following significant interest and increased female participation in the sport during recent years.

Ainslie Football Club general manager football operations Simon Holt says the growth has prompted the club to put in a lot more work in the area, and he would like to see more junior players continue into women’s footy.

“The new program gives women and the younger generation an opportunity to pursue their passion,” he says. “The Women’s Development Program is integral to what we are doing and is the fastest growing aspect of the club. Women players are no longer a minority within the club, and in the next few years we may have an equal number of men and women players.”

The first session of the inaugural program was held on 13 March, where veteran fullback and former AFL player Lynden Dunn held a session with the athletes. Other experts also held sessions and shared information on dietary requirements, physiotherapy and mental health.

“Athletes face a lot of mental pressure that can be internally generated because of huge expectations,” says Simon. “They were told about ways that can help them relax, what they can do when they are stressed out, and who they can contact within and outside the club.”

“My daughters have been playing footy with the club for five years,” she says. “There are so many more girls who enjoy the sport and would like to develop their skills so I decided to sponsor the program to encourage them to pursue their passion.

“It’s great that such a program has started at the club as more girls are turning up who are keen to play. It made sense to give them such an opportunity to develop their skills and enhance their knowledge and understanding of participating in the sport.”

The club is planning to run a modified version of the Women’s Development Program session later this year, and hold similar sessions every year.