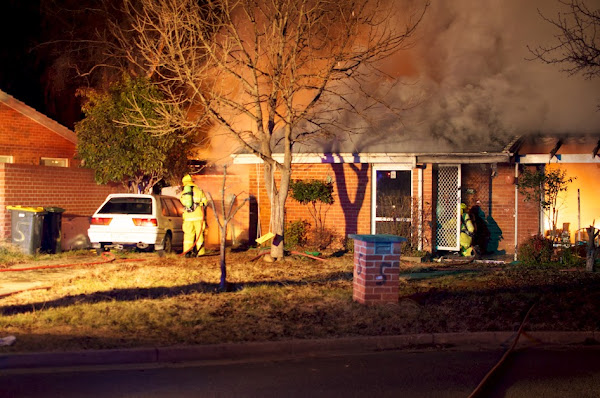 ACT Fire & Rescue has arrived on the scene of a house fire in Ainslie this morning.

The property and adjoining garage in Sherbrooke Street are well alight.

Three fire crews have managed to extinguish the main seat of the fire and prevent it from spreading to adjoining properties.

Firefighters wearing breathing aparartus will shortly begin searching the property to make sure no one is inside.

Firefighters have found no one inside the house.

The fire in the brick and tile home is now extinguished.

Fire crews are now concentrating on a garage at the rear of the property where smoke is still coming from.

The house has been extensively damaged with an initial repair bill estimated at around $200,000.

The cause will be investigated later today.

Around 1.35am police were called to a house which was well alight in Sherbrooke Street, Ainslie.

Residences on either side of the fire were evacuated while ACT Fire and Rescue extinguished the blaze.

AFP Forensic Services will attend and process the scene today.

Anyone who may be able to assist police with their investigation is urged to contact Crime Stoppers on 1800 333 000, or via www.act.crimestoppers.com.au. Information can be provided anonymously.

Well the plot thickens given that it has been disclosed that the house, according to the CT,belongs to Christopher Coggan who is currently in custody on remand at the AMC.The ACT Magistrates Court heard in March that Coggan had a 10-page criminal history, with hundreds of police records in his name across the ACT and NSW. Now that’s bloody impressive and surprise surprise a neighbour said that he ‘had lots of enemies’.Payback is a bitch!

Sophia Harris - 8 hours ago
Jimena Medway these wasps have nothing against Dad View
Karen Hardy - 10 hours ago
Helen Stafford WHAT DID I TELL YOU View
Acton - 19 hours ago
I use a trap which is effective in catching individual wasps and discourages nesting. The trap uses a European wasp attractan... View
Community 5

Michael Ilsley - 18 hours ago
How lucky are those children going to be being taught by such an incredible person. View
Rhonda Maxwell - 22 hours ago
Brad is an amazing young fella who is living a full life. His family and friends are s wonderful support as is his footy team... View
Pam Perkins - 22 hours ago
A very inspiring young man all the best in all your future endeavours and wonderful community support... View
Community 11

JC - 20 hours ago
It was a private facility unlike those in Kambah which you describe. The only fault of Government here is that they have let... View
Community 8

@The_RiotACT @The_RiotACT
RiotACT’s weekly newsletter brings you a regular dose of free local news so that you never miss out on the big Canberra stories and conversations https://t.co/tXZol5UP6u (8 hours ago)