The Capital Airway Group, which operates Canberra Airport, was named the 2016 Telstra ACT Business of the Year at a black tie event in the National Gallery’s Gandel Hall last night, putting it in the running for the national title late next month.

Almost three million passengers travel through Canberra Airport to and from Australia’s capital cities each year, with that number expected to more than double within the next decade. Direct flights to Singapore and Wellington will commence in seven weeks.

Stephen Byron, Managing Director of Canberra Airport Group, said he was proud of the significant impact the business made to the local and national economy.

“More than 12,000 people currently work at the airport precinct across 280 businesses, making a major contribution to the local and national economy,” he said. 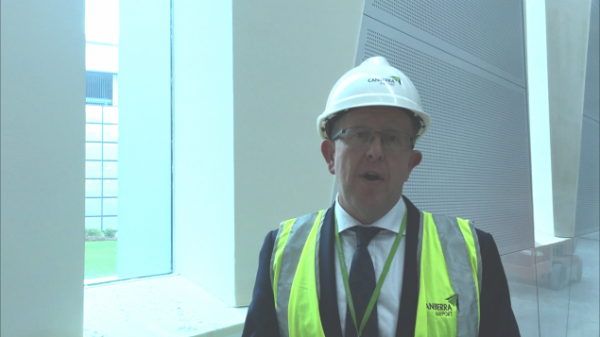 The airport operator also won the Medium Business Award. The full list of winners appears below, with details of the finalists at telstrabusinessawards.com.

“The business is a tangible success story for Canberra and the region, bringing broader business opportunities to the community,” he said.

“Canberra Airport Group also boasts great employee advocacy as a result of excellent recognition and validation of their staff.”

Other businesses recognised at the awards last night include engineering and asset management specialists Relken Engineering Pty Ltd, which won the New Business Award; iSimulate, a business developing medical and emergency devices, with the Micro Business Award; The Rehabilitation Specialists, which provides medical and support services to help people get back to work, and won the Small Business Award and the iconic Ronald McDonald House which collected the Charity Award for supporting families going through childhood illness.

Now in its 24th year, the awards celebrate the achievements and entrepreneurial spirit of Australian small and medium businesses across five categories: Micro Business, Small Business, Medium Business, New Business and, new in 2016, Charity, which is designed to recognise the contribution of not-for-profit organisations to not only Australian communities but the economy as well.

State and Territory category winners will travel to Sydney for the national judging on Thursday 25 August and attend a celebration dinner on Friday 26 August.

The winners of the 2016 Telstra ACT Business Awards are:

Relken Engineering Pty Ltd helps its clients measure, understand and then improve the performance of their physical assets in order to increase productivity and reduce total cost of ownership. Director, Benjamin Mailler, said the motivation for starting Relken was to establish a sustainable business founded on a team of cohesive and motivated professionals that enjoys the freedom to adopt innovative approaches to solving clients’ problems.

A monitor/defibrillator is a device used by health professionals to restart the heart when a patient is ill or the body goes into cardiac arrest, and can often be the difference between whether someone lives or dies. Whilst defibrillators are literally lifesavers, they are expensive and cost prohibitive for training purposes.

iSimulate sought to alleviate this problem by developing emergency, obstetric and stethoscope iPad simulator systems. The innovative software and bespoke hardware of the emergency system, ALSi can turn an iPad into a simulated patient monitor or defibrillator, which is completely safe to use on a human actor or mannequin for educational demonstration purposes.

The Rehabilitation Specialists launched in June 2012 when co-founder Fiona Fonti identified a business opportunity to create her own venture in rehabilitation services. The core of the business is about helping people return to health and return to work. A range of services are delivered including case management, return-to-work and assessment services. Over the past four years, The Rehabilitation Specialists have grown from three staff to 23, have successfully tendered for a number of large corporate and government contracts and expanded their geographic footprint to include NSW, ACT, Victoria and the Northern Territory.

When commercial pilot and former property developer Terry Snow acquired Canberra Airport in 1998, it was little more than a clunky terminal with a rundown runway. He set out to rebuild and create an airport worthy of the Australian capital city. With a vision of building the world’s best small airport, Capital Airport Group has invested $2 billion in the modernisation of Canberra Airport. Making the most of his property expertise, Snow developed 200,000m2 of office, retail and accommodation space adjacent to the airport, and used the revenue generated from the project to fund the redevelopments. The airport enables frequent and direct flights to almost all of Australia’s capital cities, with the first two international flights, to Singapore and Wellington, opening later this year.

Ronald McDonald House Canberra opened in October 2012 in the Centenary Hospital for Women and Children. It features 11 guestrooms for the families of sick kids. In May of this year they welcomed their 1000th family into the fold.

dolphin - 34 minutes ago
whatever happened to encouraging flexible working? I don't know many people who want to return to working 5 days a week in th... View
ACT Election 1

dolphin - 44 minutes ago
bit late to be submitting policies to treasury for costing... heaps of people have already voted... View
ACT Election 5

dolphin - 46 minutes ago
and Scott Morrison can't tell the difference https://reneweconomy.com.au/on-first-day-as-pm-morrison-learns-difference-betwee... View
dolphin - 49 minutes ago
Just remember that the Belco party are just a front for the Liberals trying to siphon off enough votes to get the libs over t... View
Opinion 9

dolphin - 54 minutes ago
You missed the point on this one - nothing wrong with bringing a bit of life and vibrancy into the city. it seems like you're... View
HiddenDragon - 5 hours ago
"...once again, we’re being told that the way to enhance Canberra’s vibrancy is to mimic other, bigger cities across the... View
Brisal - 10 hours ago
If it helps to revitalise another of those dingy laneways then I'm all for it. Scoff if you like but if it ultimately turned... View
Food & Wine 34

Capital Retro - 11 hours ago
Anyone been watching Ozark on Netflix? View
News 5

bj_ACT - 14 hours ago
It was always a bit funny when Turner residents were complaining about extra buses when whole swathes of suburbs lost their b... View
chewy14 - 14 hours ago
Honestly, is there anything more NIMBY than worrying about the "city coming for their neighbourhood" in an area less than 1km... View
HSewell - 15 hours ago
Good result View
News 18