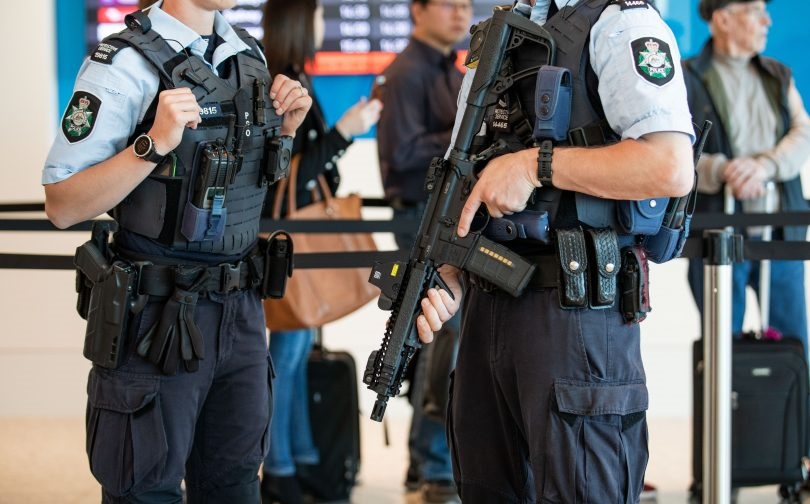 More AFP officers will patrol our airports to crack down on bad behaviour by passengers. Photo: AFP.

Expect to see more AFP officers patrolling airports across the country this festive season, with police ramping up action against anyone being disruptive or breaking the law.

The crackdown comes after the AFP laid about 420 charges against 330 people at airports in the past six months.

Three alleged offenders were charged over incidents at Canberra Airport.

Most of the 420 charges related to intoxication or offensive behaviour, possessing a prohibited weapon, carrying prohibited items, public disturbance and incidents relating to assault.

AFP Assistant Commissioner Specialist Protective Command Scott Lee said he was concerned about the level of intoxication of some of the charged passengers.

“We expect passengers to be responsible when consuming alcohol, but we also expect those who serve individuals to adhere to the responsible sale of alcohol provisions,'” he said.

“Some behaviour on flights in recent months has been appalling and, in some cases, dangerous.”

He said passengers, especially those with young children, expected to feel safe and shouldn’t have to witness intoxication, violence or bad behaviour.

“Intoxicated individuals on flights or in the terminal can be charged, and those who are convicted of an act of violence at an airport or endangering the safety of an aircraft in flight can be sentenced to up to 20 years’ imprisonment,” Asst Comm Lee said.

“Airports are not nightclubs.”

There were already about 500 members from the AFP’s Airport Uniform Police, Protection Operations Response Teams and Counter Terrorist First Response team at nine domestic airports across the country, including Canberra.

They were supported by 49 explosive detection dogs and 25 canines capable of detecting cash, drugs, firearms and technology devices.

In March last year, the AFP re-booted its Airport Watch program. The public has been encouraged to call Airport Watch on 131 237 if they see or hear something unusual while working or travelling through one of the nation’s major airports.

The community is also encouraged to share information or footage of any incidents either on a plane or in a terminal to assist with investigations.

Three incidents at the Canberra airport out of 420 nationwide? Mostly related to intoxication and offensive behaviour. Maybe the authorities should be clamping down on the airlines’ members lounges and their lax habits when it comes to serving alcohol! Passengers boozing away in the lounges only to go out and inflict their drunken and offensive behaviour on fellow passengers, staff and guests. I have seen it time again!

3 arrests in the course of a year, and they’re adding more heavily-armed police and sniffer/attack dogs to the welcoming committee? It seems like an overreaction, but I guess when all you’ve got is a hammer…

Just wait for the waving of drug laws

The alcohol lobby is all too powerful.
Rather than proactively reducing sales of alcohol in these areas they just deploy more police at the tax payers expense.

Alcohol and the non stop gambling our children are exposed to on the TV needs to stop. 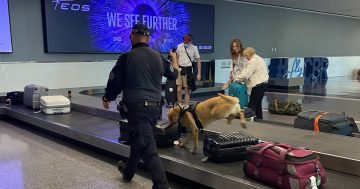