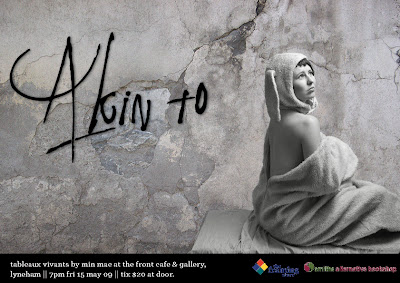 Art! Nudity! Drinks! What more could you really ask for on a Friday evening? This in from producer Min Mae:

Are we but animals beneath our clothes?

Canberran artist Min Mae begs the question in Akin to, a series of tableaux vivants that visit the merger point of human and animal at The Front Gallery and Cafe, Lyneham, 7pm Friday 15 April.

“Tableaux vivants” is the French term for “living picture” and was a popular 19th century artistic form which brought actors or artist’s models together in carefully posed groups where the models do not move or speak.

Mae’s latest offering presents animalistic nudes amidst an avant-guard atmosphere of music, art and performance. The audience are invited to sketch the models and prizes from The Framing Store, Braddon and Smith’s Alternative Bookshop will be given for best sketches.

Mae says of this tableaux series; “I just couldn’t resist the zoomorphic pull, it seems everywhere I look there are beasts merging with people, it’s in our language, in art, in popular culture. And there’s so much fascinating psychosexual connotation and mythology around the theme, I just had to do this, beastly though it may be.”

Mae’s unique use of the naked human form as her medium has earned her much attention of late, but it is not merely public nudity that makes this artist one to watch. Her themes are often familiar, but their presentation in the form of tableaux vivants are striking, tangible and sometimes confronting.

Akin to is Mae’s third staging of tableaux at The Front Cafe & Gallery. Both previous events sold out early and were heralded as the most bizarre and lush evenings of entertainment Canberra had seen in a decade.

Tix $20 available at the door.

Paul Mills - 39 minutes ago
Too many medium density developments with zero design merit. Welcome to Northbourne canyon. View
Lynne Staunton - 2 hours ago
Julie Arnold but at least when the next big fire comes through that way there us now a decent fire break to protect the inner... View
Linda Johnston - 5 hours ago
Nick Anderson I think it goes back earlier than Forde. I remember going into parts of Tuggeranong and having absolutely no id... View
Sport 5

@The_RiotACT @The_RiotACT
The planning authority has rejected claims that it is a toothless body unwilling to fight for its decisions in the courts, defending its deal with Zapari that will see the company's controversial Coombs development proceed. Check out what changed https://t.co/16ycDV9SUb (40 minutes ago)