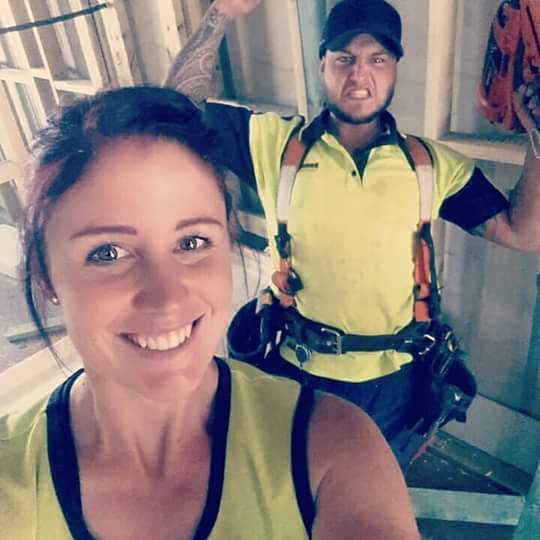 Thirty-three-year-old first-year carpentry apprentice Alison Knights is a rare Canberran. Not only is she one of a tiny number of women working as a tradie in the ACT construction industry, but she is someone who loves her job – every day!

A single mother-of-three, Alison started work as an apprentice at an older age than is the norm and she is part of a trade that is 99 per cent male.

But if Master Builders ACT has its way, Alison will not be on her own for long – they see her as one of the faces of the future for the territory’s building and construction industry.

Master Builders ACT has launched a ‘Work Insights Program’ aimed at breaking down the barriers which are stopping women from working in a trade in the building and construction industry.

The four-week pre-apprenticeship program gives young women an opportunity to gain an insight into what it would be like to work in a trade in the building and construction industry before making a commitment to start an apprenticeship. If they decide to go ahead they are then provided with an avenue to employment in the industry.

“MBA is committed to working with government to increase the uptake of women in trades. We already train 50 per cent of the ACT’s carpentry apprentices and this program, if successful, will deliver a pathway of employment for 10 females who wish to undertake an apprenticeship in carpentry, plumbing or civil construction.” 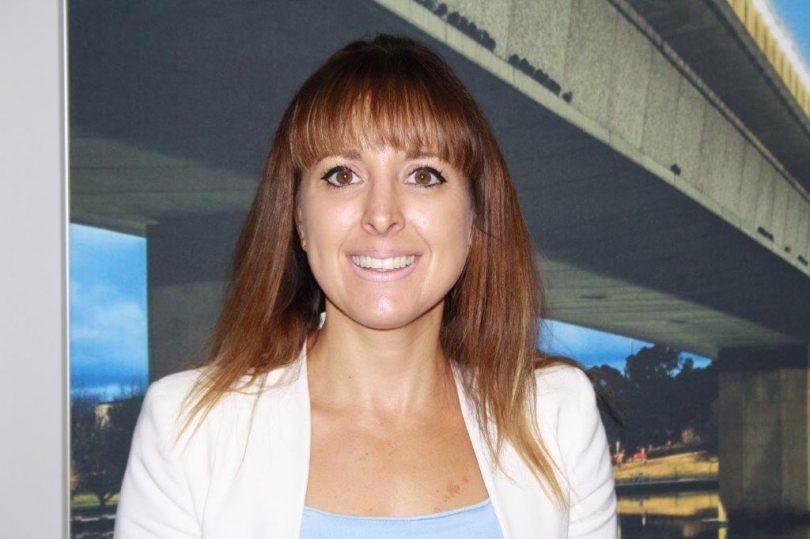 According to the ACT Government, women are often actively discouraged from undertaking apprenticeships in building, plumbing, automotive, engineering and electro-technology.

The Government identified the key barriers for women entering the building trade industry as including gender stereotypes, a lack of exposure for females to trade vocations, the representation of tradeswomen in popular media, and the difficulties faced by employers in recruiting female workers and handling workplace issues.

Alison said it can be intimidating for women to work in such a male-dominated area, with the guys sometimes not knowing how to act or be diplomatic around women.

“You have to be pretty resilient and pretty tough,” Alison said. “But it’s starting to change.”

Alison is currently working on a residential construction site in Bruce and said the team of people she works with are “like one big family”. She said that it is a large site and sometimes a new team will start working there and initially give her funny looks as if she is out of place.

However, Alison said she is never harassed because the team she works with always look after her.

Alison used to work in conveyancing law but made a career change to become a carpentry apprentice after she started building her own house and found she really enjoyed the process.

“I wanted a job that I’d enjoy going to each day and I took the plunge.” 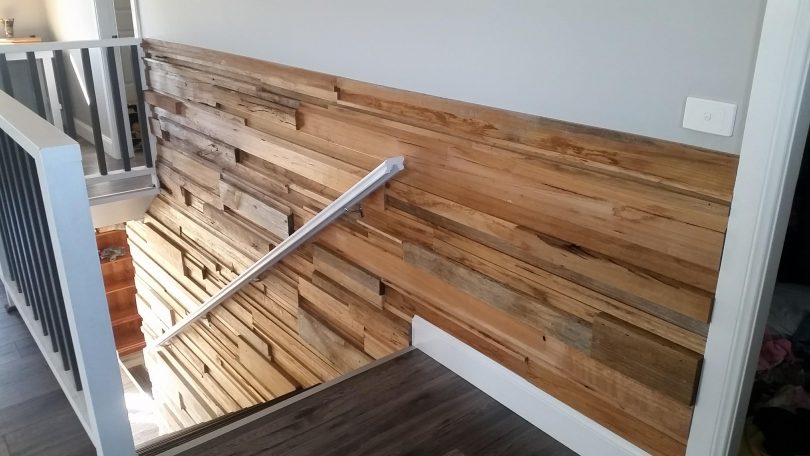 Alison loves the hands-on component of her job. This is a feature hardwood timber wall she built at her own home. Photo: Alison Knights.

As a single mother of three children aged six, seven and nine, Alison found the drop in wage in becoming an apprentice difficult but said she is lucky to have a boss who pays her above the award wage.

Alison works for Above & Beyond Constructions and said she was lucky to get Charlie Faraj (a former MBA apprentice) as her boss after hearing he was looking for apprentices from a “friend of a friend”.

“He’s very accommodating when it comes to my time with the kids. My hours are based on school hours,” she said.

Alison works on a variety of carpentry jobs such as constructing frames, putting up trusses and any form of work with timber. She is known for her attention to detail and thinks this could be one of the strengths women could bring to the trade.

“I love it. I do like the hands-on component. It’s always a challenge and it’s never mundane, ever,” she said. 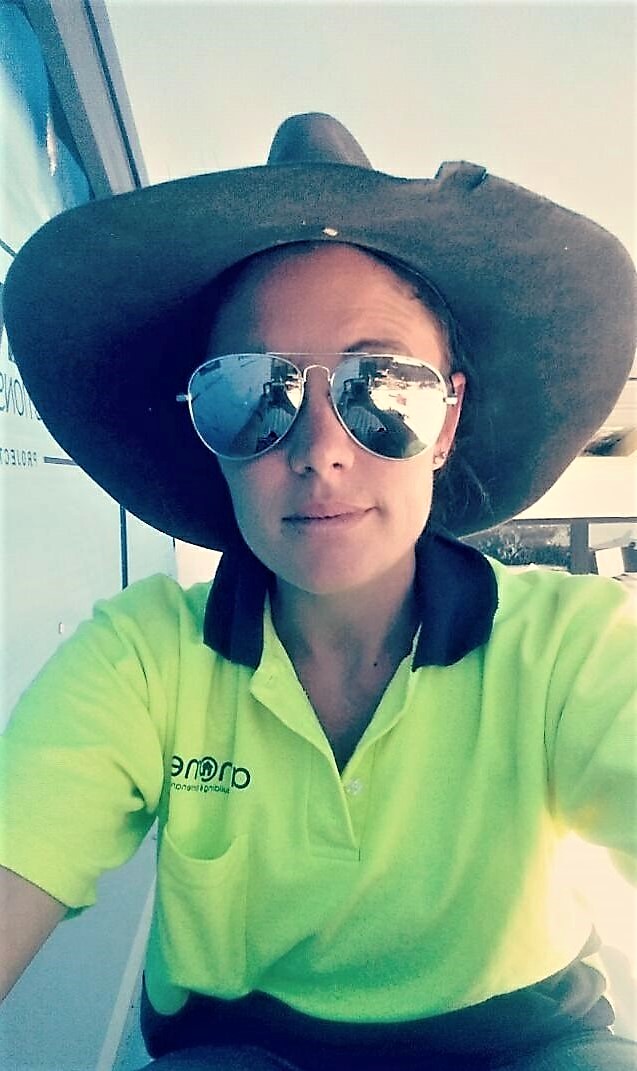 Alison is glad she made the change to become an apprentice in the construction industry and said her kids like to tell their friends that their mum’s a builder.

She thinks the new pre-apprenticeship program provides a good opportunity for other women to find out what it’s like to work in the industry.

“The hardest thing about doing it for me would be the financial factor. As a mum, if I didn’t have the flexibility that my boss offers it would be difficult,” Alison said.

“I was always worried, as well, that I wouldn’t be strong enough to keep up with the boys but it wasn’t an issue.”

The Work Insights Program is being run with the aid of funding from the ACT Government and is a four-week pre-apprenticeship specifically for women who are interested in starting a career in carpentry, plumbing, civil construction or electrical occupations trades.

The first program will start in August this year, with a maximum of 15 places available. The program will include formal training, as well as presentations from industry employers, current employees, life coaches and a well-being mentor. There will also be a number of construction site work placements to expose the successful applicants to all aspects of the industry.

“We encourage anyone who is interested to attend a free information session about the program, which will be held on Wednesday 1 August 2018, 4:00 – 5:00 pm at our office in Fyshwick,” said Ms Nair.

Lyn Smith - 1 minute ago
They'd better! It would be great to see this restored! View
Neil Thompson - 3 hours ago
Andrew Turnbull, great bloke to get on the piss with as well. View
Trevor Hicks - 4 hours ago
About time 👍 View
News 51

Maya123 - 15 minutes ago
More realistic of them to accept that climate change is happening and not ignore the research of those working in the field a... View
Jo Hann - 1 hour ago
Christopher Stuart Veilands how do they brainwash kids in schools when they've never been in government and have no say in th... View
Jo Hann - 1 hour ago
Robert Harrop how does a party that's never been in government have enough control over schools to brainwash the children in... View
What's On 1

Lucas Hayden - 37 minutes ago
This is one of the best facilities ive ever seen...... I am not a "horse" person but I almost became one just walking around... View
News 17

Kathy Sepulveda - 46 minutes ago
Jessie Nicho I'm a little late to this but I agree with you 100%. All the money is going into the Northside Public Schools an... View
Sport 2

Trish Casey - 1 hour ago
Mark Parton has helped age care and those with disabilities living in ACT housing more than anyone .we have had 3 break ins t... View
Mark Parton MLA - 3 hours ago
It’s my job to help constituents and It’s my job to hold the government to account. I’ll continue doing both. View
Capital Retro - 3 hours ago
Nailed it. View
News 2

Robyne Mitchell - 2 hours ago
How many years have they been promising this? View
News 13

Steven Campbell - 3 hours ago
Reducing posted speed limit is simply government’s way of running away from their responsibilities. Laws are only as effect... View
Opinion 73

Capital Retro - 3 hours ago
Spot on. What goes on behind the scenes is usually at odds with the "clean & green" propaganda we hear. Just like a wind "far... View
George Watling - 12 hours ago
These things also generate vast amounts of e-waste and carbon pollution. Studies show they last about 9 months before they ar... View
Opinion 11

George Watling - 11 hours ago
These multi title trojan horses are cropping up all over Canberra. Developers are trying it on in Holder and Weston and other... View
Opinion 94

George Watling - 11 hours ago
Marc Edwards Spot on Marc. The best way to deal with congestion is decentralize workplaces. If everyone is travelling to a ce... View
show more show less
*Results are based on activity within last 7 days

@The_RiotACT @The_RiotACT
Captains Flat Road will get a much-needed $10 million upgrade over the next four years as part of a capital works program in the Queanbeyan-Palerang area https://t.co/2zPIjg1tc5 (3 hours ago)