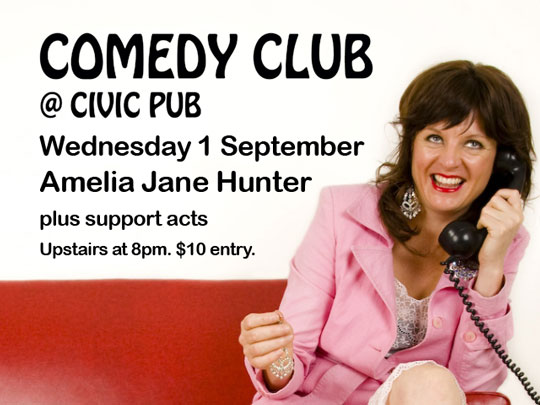 Comedy Club at Civic Pub is on this Wednesday night 1st September with a headline slot from Sydney comic Amelia Jane Hunter.

Hunter’s unique brand of energy filled character comedy provides hilarious insights into the wicked and wily workings of a well bred, lateral thinking mind. Her humour is both confronting, sensitive and intelligent, a hearty grain fed, well rounded, full bodied flavour with lashings of laughter and a generous side of political profanity.

Amelia was a contributing comedy writer on ABC’s The Glasshouse, has performed on the Comedy Channels Stand up Australia and was recently a team captain on the SBS sports comedy quiz The Squiz.

Joining Hunter on stage on September 1 will be Paul McMahon from Byron Bay who wowed audiences at his last Civic Pub appearance, as well as locals Marie Helou, The Stevenson Experience, Greg Kimball, and Marcus Amann.

Comedy Club at Civic Pub is held the first Wednesday of every month upstairs at Civic Pub in Braddon. Show starts at 8pm. Entry fee is $10 at the door. Next show is Wednesday 1 September.

Things the press has said about Hunter:

‘She makes me laugh so much it hurts.’ – Megan Spencer (Triple J)

John Dale - 21 minutes ago
Yep, great idea. I don’t see even one appeal coming out of this. Not one. No, seriously.... View
Opinion 15

John Hynes - 22 minutes ago
MB Miyagi or throw matches for bookies like India has done View
MB Miyagi - 24 minutes ago
John Hynes or spending more than they are allowed to like Carlton did 😃 View
Steve Frame - 2 hours ago
Lisa Bishop if they don't pass the money they make from selling the tv rights and selling out stadiums to the players, the we... View
Food & Wine 2

Canberrans have been warned not to become complacent and that they are in for a long campaign against COVID-19, as...