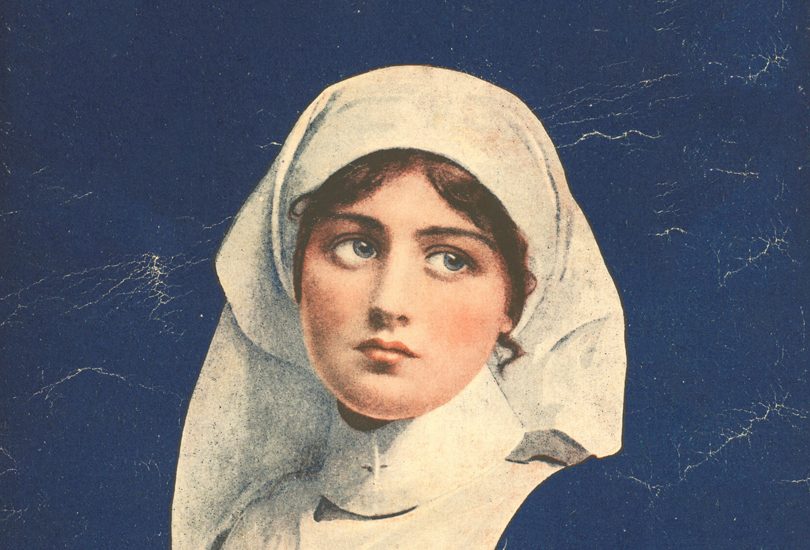 In the midst of a global health crisis, one of the greatest trials the modern world has faced, communities have turned their collective and appreciative gazes towards those who have been fighting on the front line: our doctors, nurses and allied health care professionals.

Across Australia and around the globe, people have been #clappingforcarers, preparing meals for those on the front line, realising just how vital health care professionals are in keeping the world safe.

Australia has a proud history of service in the health care profession and this International Nurses Day the National Library of Australia would like us to stop and consider a particular service, at the pinnacle of nursing that has spanned generations, the Australian Red Cross. 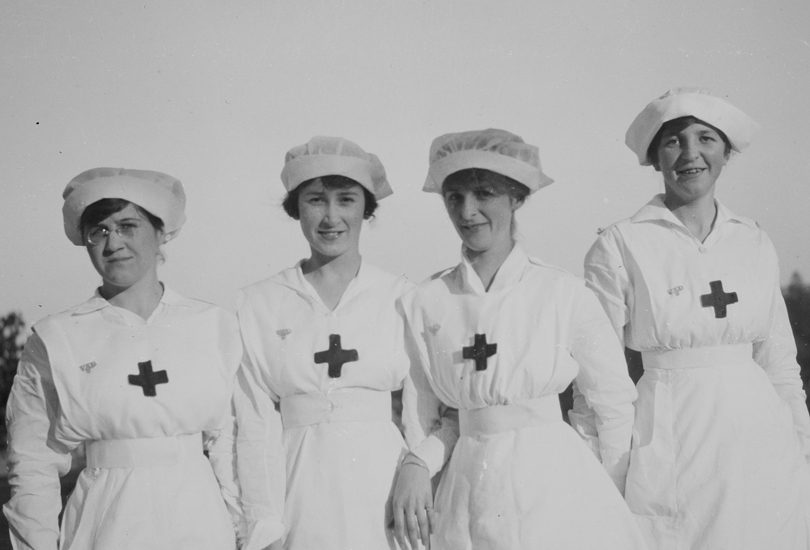 The Australian Red Cross was formed just after the outbreak of the First World War as a branch of the British Red Cross Society (‘Four Red Cross Nurses’ 1915). Photo: nla.cat-vn7760494.

One of the most recognised providers of care and relief, you would be hard pressed to find a person who has not been touched by the Red Cross, knowingly or not, through a blood transfusion, during an emergency or natural disaster, or through work with the organisation as a volunteer or staff member.

Celebrating their centenary in 2014, the Australian Red Cross was formed just after the outbreak of the First World War as a branch of the British Red Cross Society. Initially, the member-based organisation was viewed as one primarily for women and part of their contribution to the war effort.

In addition to those on the frontline, fondly known as the ‘Angels of Mercy’, there was an army of volunteers who knitted socks and balaclavas, sewed pajamas, packed parcels, raised funds and donated countless hours of unpaid labour for the duration of the war.

The Red Cross first assisted those on the battlefield and then civilians. It is one of the grand ideas of the nineteenth century. And it is one that has not only survived, but flourished, into the twenty-first century.

The ambitious nature and global reach of the Red Cross makes it all the more remarkable because, as we are coming to know now more than ever, the need for such an organisation has not diminished over time. 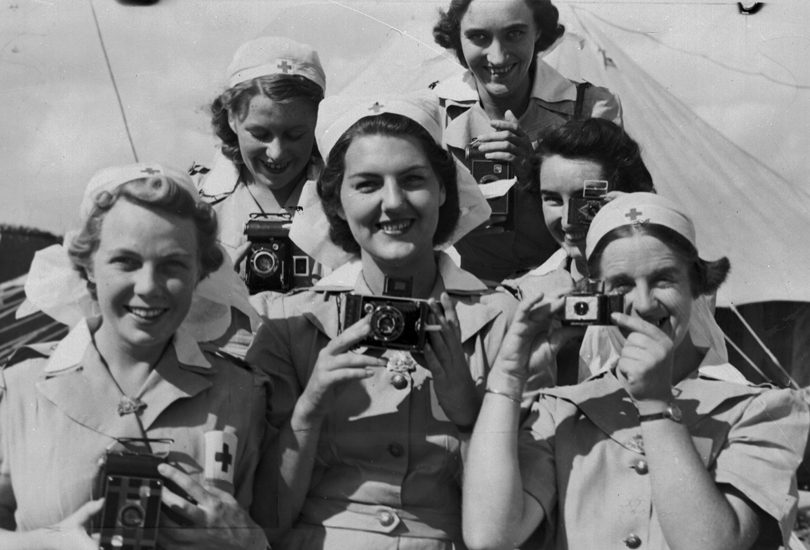 Today, in Australia and around the world, millions of volunteers are, once again, mobilised to help respond to the new danger of the COVID-19 pandemic, and are working their hardest to support vulnerable members of the community in a variety of ways. Millions of nurses have answered the call, joining the fight against an invisible enemy.

As we continue to see footage from hospitals featuring nurses with grazes on their faces from their surgical masks, nurses who are continuing to serve their community while putting themselves at great personal risk, we must say thank you.

For centuries, nurses have aided in the recovery of the sick and cared for the dying. On this International Nurses Day, we pay tribute to those who have held hands and offered a friendly face when loved ones couldn’t.

The Australian Red Cross’ early history is illuminated by the collections of the National Library of Australia: in manuscripts, sheet music and poems, posters and maps. A selection of this material is available online. Search ‘RED CROSS’ at catalogue.nla.gov.au.

This article contains extracts from ‘The Australian Red Cross: 100 Years On’ feature article written by Professor Melanie Oppenheimer for The National Library of Australia magazine (June 2014).

Alan Davey - 16 minutes ago
Very loose has he grown up yet more show than go onthe fringe... View
Warren Brown - 13 hours ago
What a true grub ! View
News 18

John Goodwin - 4 hours ago
29th April 1770 was when an explorer landed /discoverd Australia View
Chris Hobbs - 7 hours ago
Unless I'm missing something, James cook landed in botany bay on 29th April 1770. The first gun shot was fired on this day. I... View
Linda Stapleton - 13 hours ago
Changing the date will just be like reconcilliation day.. it becomes a nothing action. remember when they said we had to have... View
Community 6

Lucy Baker - 5 hours ago
Michelle Langsam please share to church? View
Robyn Jones - 8 hours ago
Where is it located View
Monica Tiffen - 9 hours ago
I find it hard to put a light-bulb in!!!!! View
News 5

Ali Geez - 8 hours ago
Russell Nankervis our ex-PM once said ‘mum and dad should chip in for their kids’ View
David Graham - 9 hours ago
Is it on stalled or installed? View
Russell Nankervis - 15 hours ago
As if students could afford an apartment that close to the Parliamentary triangle View
Community 44

Kirby Haines - 8 hours ago
Sure but you haven't addressed the issue of admin costs vs revenue. Every time any government has looked at this it has faile... View
Trev Graham - 8 hours ago
Kirby Haines i think any regs could apply to 16 up. not sure a full rego is appropriate for bikes but some small compulsory i... View
Peter Major - 9 hours ago
Hugo Young Ride in single file and comply with ALL road rules, do not impede the flow of traffic and there are minimal proble... View
Opinion 53

Adam Jovanovic - 10 hours ago
Daniel Burden Government owning up to its own mistake buahahha View
HiddenDragon - 11 hours ago
Unless there's a nice little quid pro quo coming up for the ACT in the next federal Budget (dream on....), this outbreak of "... View
show more show less
*Results are based on activity within last 7 days

Whenever a story about cycling appears, it activates an avalanche of pent up angst from the wider community. Predominantly it’s...
Community 44

Muscling up to Australian cartoons? Get Inked

@The_RiotACT @The_RiotACT
Sweet Piper had a litter of puppies when she was only a baby herself, and is now at @rspcaact waiting to find her forever home https://t.co/VHBQOCXP4f (11 hours ago)