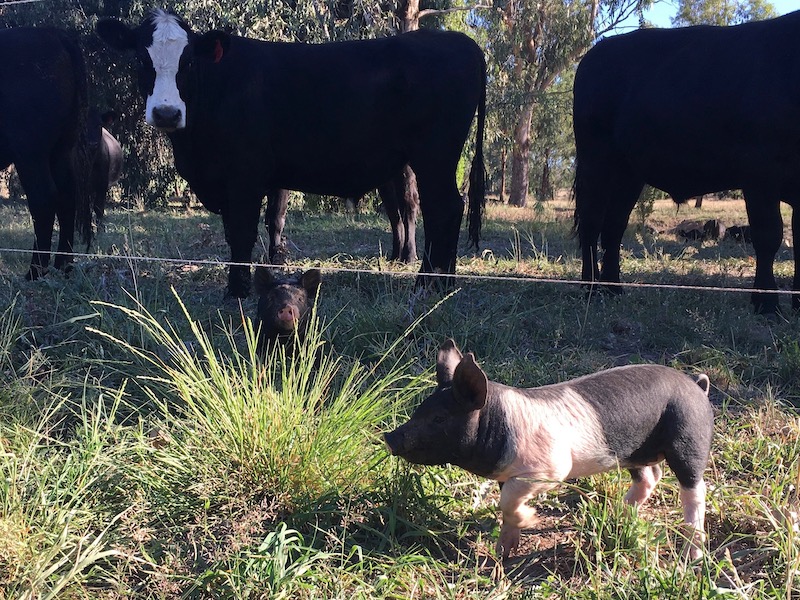 Years ago at a free-range farm reporting on unconventional grazing, lots of little pigs kept nipping our photographer’s backside as he lowered the camera to ground level.

We left ‘Windermere’ near Young well satisfied. Despite the pigs’ audacity, our photographer had excellent photos. I had an interesting story too, of Sam and Claire Johnson talking more about restoring woodlands, than market prices and profitability.

I was sceptical. Well-intentioned people like this couple often go broke on the land. Quickly.

But my doubts waned over the years, as the success of their grass-fed beef, pork and bacon is traced back to their rejuvenated soil. These days if you want to buy an eye-fillet steak from the Johnsons’ Boxgum Grazing at the Capital Region Markets, either order ahead and be there at 6:30 am. Otherwise they will have sold out.

They are going gangbusters. Even more popular is their bacon and sausages. “Over all anything to do with the loin or belly of the pig is the most popular cut,” Sam says.

“We have built a butchery on the farm,” Sam says. “Our son Sid came home five years ago, and we decided to go beyond what the butcher could do in Young, we have built the butchery with a smokehouse. Slaughtering is still done at the local abattoir, we do all the butchering, and make ham and bacon.”

Two full-time and a casual staff member have joined the operation, which Sid manages. “Our daughters Annabel and Molly are also involved, we are going through succession planning, they are getting involved in the marketing and strategic development,” Sam says.

Stock are moved from paddock to paddock. Most of the land on Windermere is exposed to animals grazing for six days of the year. For 360 days the grass grows without being eaten, allowing soil to build and for insects, lizard and birds to flourish in the grass. Claire manages the continual rotation, which is more intense these days with more cattle and introduction of Southdown sheep. 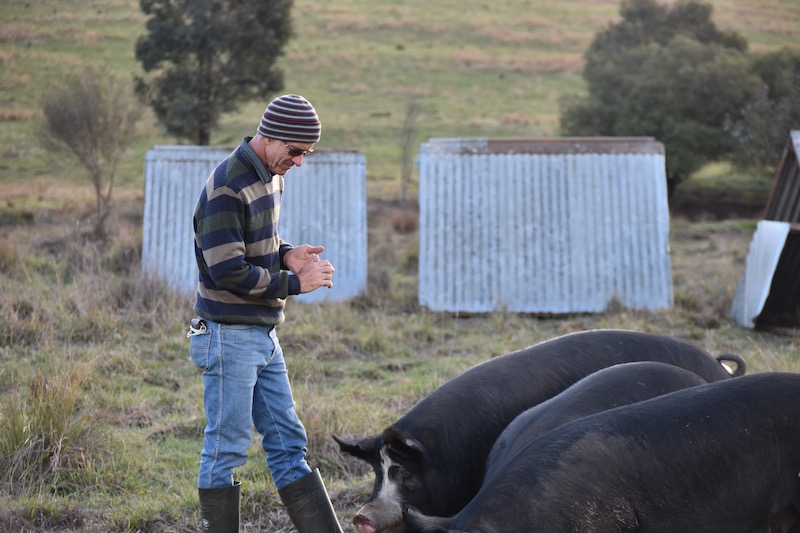 Sam Johnson and some of his flourishing livestock.

The Young district remains in drought. Fierce summer storms dumped 100mm in an hour-and-a-half on neighbouring farms. “It created a lot of damage. Dams overflowed within half an hour, whereas Windermere dams did not fill,” Sam says. “Flash floods turned bone dry creeks into raging torrents in 40 minutes, we lost kilometres of fencing close to creeks.”

While Windermere didn’t receive huge rainfall it held on to what fell on its paddocks. “It is astounding really. We realise we have only just got going in creating a much more biologically active soil that can take rain in. If you take it in and don’t lose it through run off and evaporation you can ride out the dry periods much better. We haven’t fed hay at all, we haven’t bought hay. We have reduced our (stock) numbers a little bit.”

Sam never worries the dams don’t fill because the water is trapped in the soil instead.

“The summers are getting more intense,” he says. “Due to climate change, evaporation rates are fierce and dams will be ineffective.”

Selling meat in Canberra to a highly-educated market, the Johnsons are promoting their sustainability and regenerative agricultural approach which strikes a chord because of climate change.

The family sold a sizeable portion of land to the national parks which has property adjoining Windermere. Years later the numbers of kangaroos have risen so much the rear part of their farm looks as if sheep have been running there the whole year. Rangers can’t get permission to manage the numbers. “Parks are losing biodiversity hand-over-fist for all sorts of species and grass species. It’s not doing kangaroos any good either,” Sam says.

Sam grew up at Windermere. He and Claire returned in 2002 to try a new method of grazing, and have been rewarded to see regeneration and resilience of the land. “We can have our woodland and a productive business. This is a win-win for us. We can plant our eucalypts and other natives in open woodland and still harvest our animals running through that, that’s a great plus.”

Well done to this family for being brave enough to tackle the hard issues and winning. 👏

Paul Leins - 8 minutes ago
AJ Jay some savage gravel drive ways out there View
AJ Jay - 47 minutes ago
Paul Leins but but you may have to go over a gutter in the carpark...or park on a green verge...totes justified then.🤣 View
TimboinOz - 4 hours ago
A Forester is even better. More ground clearance makes it's reach / range into bushland a good bit better. And it's just as g... View
News 83

Diana Napier - 35 minutes ago
It's not a museum. That's the point what they are building is a ballroom for men who never had one.... View
News 66

chewy14 - 2 hours ago
JWinston, Most people probably didn't respond because the "documentary" you reference was full of outdated, inaccurate inform... View
jwinston - 2 hours ago
Good luck with that. I recommended “Planet of the Humans” on a thread months ago and the silence has been deafening. I gu... View
Futureproof - 3 hours ago
There's no such thing as zero emissions. Every item you buy has had emissions to create it. The Chinese made windmills, the C... View
Opinion 37

Conference puts region’s future of food on the table

@The_RiotACT @The_RiotACT
The 2021 Kite Festival is an opportunity for everyone to participate in an ancient Indian tradition, and hopefully feel some sun during a winter hibernation https://t.co/hR5Nmvb6Bz (1 hour ago)