Andrew and Simon – an exercise in Destiny 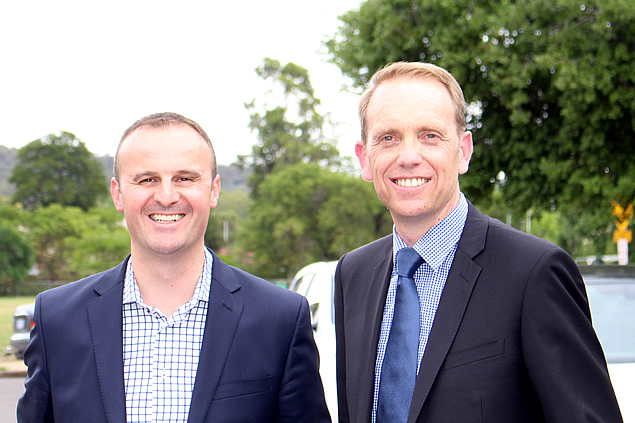 The inevitability of this team of Andrew Barr and Simon Corbell had its genesis way back when they were both students. They were both leading lights in their paddock of the Young Labor Right and Left.

They were adversaries at the Annual Labor Conference battlefields of the 1990s and both emerged as mature political leaders after the Young Labor days were over and they joined the grown-ups.

The similarities are stark. They both cut their teeth working for politicians. Simon with John Langmore and Andrew with Ellnor Grassby and Annette Ellis. Admittedly, Andrew had a stint in private enterprise with Media Monitors, but that was gathering stats on political events.

Both came into the Assembly on a count-back and both are effective orators in the Chamber. Both were respected influences in Cabinet and Caucus.

Both of them were destined to lead the ACT Parliamentary Labor Party at some stage. And so it has come to pass.

The new leadership team has such complimentary skills and approaches that the team that they lead will be greater than the sum of the parts.

But where to now with this dynamic duo? Pretty much more of the same for while. The 2015/16 Budget is mostly done and so any really big change will have its impact on that. More steady as she goes is the tip.

The team will get its own unique act together preparatory to the next election. Differences between the styles and priorities of Katy and Andrew should emerge quietly and slowly over the next 12 months and not before.

There is interest of course, in the construct of the new Barr ministry. Are they tea leaves in the bottom of my cup? Does anyone believe in history repeating itself?

The current five ministers will remain because there is no reason about to warrant change other than portfolios. A change of portfolio delivers refreshment anyway and a change of leader heralds that refreshment.

But who will be the sixth Beatle?

Let’s look at the claims. Ms Berry could claim youth and generational change, coupled with gender balance and the need to have a minister for Belconnen. But her experience is only two years old. But that didn’t hamper Mr Barr

This need for a minister in Belconnen could be claimed by both Dr Bourke and Ms Porter.

Ms Porter could claim gender balance coupled with extensive experience in the Assembly both as the best constituent representative, and thus well in touch with community sentiment; and as a committee chair and Deputy Speaker.

Enter Ms Fitzharris into the equation. She comes from Gungahlin, where a resident minister would be an asset. She has the gender and age balance to offer. Again, lack of experience did not stop Mr Barr.

Will history repeat itself?

Are there tea leaves in the bottom of my cup or are they coffee grounds?

What a pretty pic.

It will still be the same old ACT Labor with similar if not the same policies.

The ACT Libs would also be the same old, same old if they had to replace someone.

We will still have parties of the 2 extremes. Labor spending $ they (or rather ACT Ratepayers) don’t have and if the Libs get back in 2016, it will probably be cut, cut, cut to reign in the budget deficit.

OMG – how boring is it all – not to mention damaging to the ACT economy and employment growth – and expensive for Ratepayers.

Hopefully, if there is to be a balance of power in the post 2016 election ACT Government, it will be an independent or a party that is non aligned and votes on a proposal by proposal basis and is not subsumed into Government and so loose their identity, like the Greens Rattenbury. If not, this same old, same old ACT Labor/Liberal stuff will likely go on forever.

I think it’s something you use when you can’t get a job on merit.

Henry, thank you for saying what John Hargreaves cannot say.

I think it’s something you use when you can’t get a job on merit.

Birchy Birchy - 17 minutes ago
A great article 😁 View
Emily Grace - 1 hour ago
Martin McMaster True. What about the casual dates, long distance relationships etc? Are they meant to be the "oppressed" or "... View
Rachel Lemon - 1 hour ago
Karen Baldwin ask them ‘which husband?’ Their faces will be priceless! 😂 View
Food & Wine 7

JS9 - 4 hours ago
Whether they should or not, the markets do care, because the credit ratings invariably drive the interest rate at which insti... View
JS9 - 4 hours ago
To be fair - an implicit guarantee exists in the form of the RBA. Because it can always print money and buy Government bonds... View
Heavs - 5 hours ago
Dear Chewy and JS9. Thanks for pointing out how things actually work inside government finance. But actually, here is another... View
Community 8

Of all the legislation that the Morrison Government has decided to prioritise, its voter identity bill is arguably the least...
News 64

The outsourcing of Australian Public Service (APS) work, including the use of consultants, has been described as an industry full...
Opinion 46

@the_riotact @The_RiotACT
RT @Breaking_247: A 27-year-old woman accused of trying to find a hitman to #murder her parents on the dark web is back behind bars again a… (3 minutes ago)

@the_riotact @The_RiotACT
Being caught drink or drug riding an #e-scooter could set you back more than $3200 under new ACT Government legislation introduced on Wednesday https://t.co/BXeTu3ief9 (25 minutes ago)

@the_riotact @The_RiotACT
Draft terms of reference for the #OrroralValley fire inquiry reveal it will likely explore the operation of an Army #helicopter, the light of which may have sparked the devastating #blaze, and the actions of its crew https://t.co/eWk0EVq9B2 (1 hour ago)