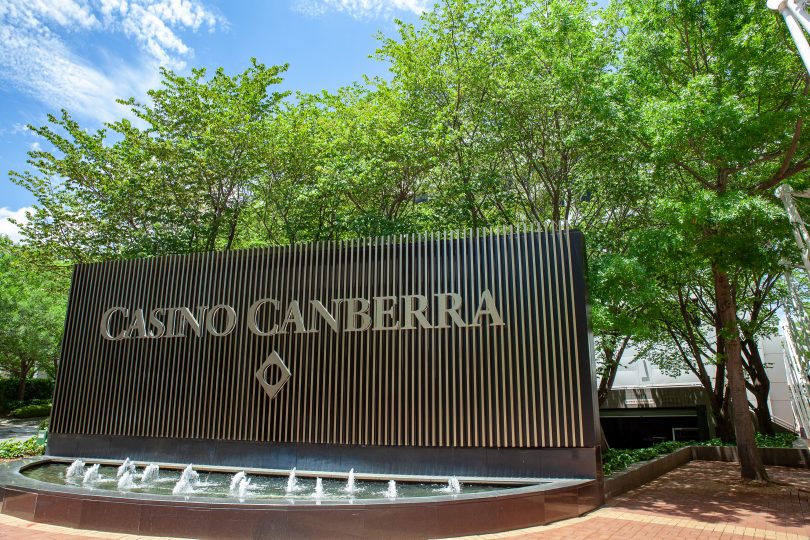 The owners of Casino Canberra have received another bid, following a plan announced in the middle of last month to sell the venue for $52 million. Photo: File.

The company that owns Casino Canberra has requested a trading halt on the ASX as it considers another bid for the venue.

Hong Kong-based Aquis Entertainment Limited – which has operated Casino Canberra since 2015 – lodged a request for a trading halt with the Australian Securities Exchange on its shares yesterday (30 June) until Monday, 4 July.

Aquis owners confirmed to the ASX it has received a competing proposal.

Further details about the latest offer will be made public next week.

It follows an announcement in the middle of last month that Aquis intended to sell the venue to Sydney-based hospitality company Oscars Group for $52 million.

Oscars is one of the largest hospitality groups in NSW. It operates pubs in Sydney and hotels across the country, including Newcastle, Wollongong and Brisbane.

The Oscars sale was pending shareholder approval which was likely to be sought by August this year, with the deal expected to go ahead in the same month.

At the time, it was confirmed that no casino employees would lose their jobs during the process.

Aquis Entertainment chairman Russell Shields described the Oscars offer as “compelling”, saying it would benefit shareholders in the long run.

Previous attempts to sell the casino had failed, largely due to regulatory processes not being followed or met in time.

In 2018, Blue Whale Entertainment sought to become the largest shareholder through a $32 million deal.

That deal fell through because Blue Whale could not provide the ACT Gambling and Racing Commission with the necessary information in time.

In 2018, the ACT Government rejected Aquis’s $330 million unsolicited bid to redevelop the casino precinct. Negotiations between the government and the casino had broken down over the conditions imposed on the project, including the number of poker machines it would be allowed to operate.

The casino wanted 500 poker machines, but legislation limited it to 200.

Compared to 2020, profits decreased by 71.1 per cent, but total revenue increased by 33 per cent. Its operating expenses increased by 39.8 per cent, mainly because it had to pay the full annual casino licence fee, which was waived in 2020.

It had also been unable to claim JobKeeper support from the Federal Government.

In a statement, the casino’s directors said it had continued a cost control program throughout 2021 to minimise expenditure, particularly during the COVID-19 lockdowns.