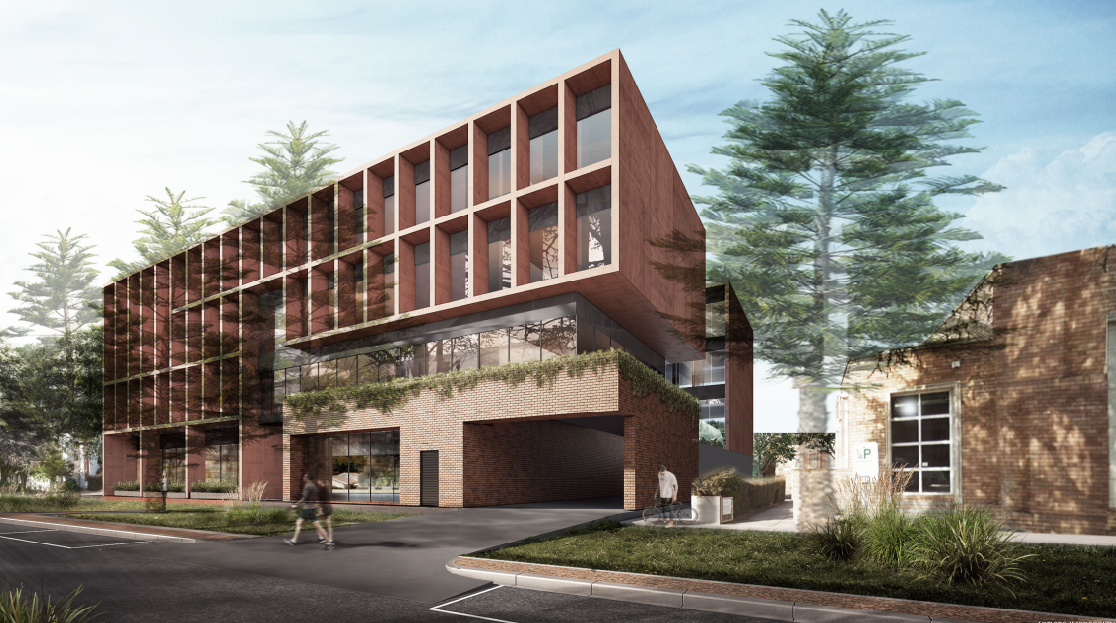 An artist’s impression of the Kingston Geocon proposal. Image: Turco and Associates.

The Kingston Barton Residents Group is preparing to launch an appeal against the approval of Geocon’s controversial proposal for a multi-storey commercial development next to the former Kingston Post Office at 84-86 Giles Street (Blocks 13 and 22, Section 22).

The development giant revamped the proposal, which in its original form drew criticism from Chief Minister and local MLA Andrew Barr, halving the building height from eight to four storeys and switching from a mixed-use residential project to just commercial.

Community members and neighbours had been alarmed at the bulk and scale of the proposal, which many felt was out of step with the character of old Kingston, although nearby businesses were supportive.

The Inner South Canberra Community Council and the Kingston Barton Residents Group welcomed the changes in the DA lodged in October but remained concerned about the four storeys, which is double the Precinct Code height limit. However, there is leeway for higher buildings if it is “compatible with the desired character, and appropriate to the scale and function of the use, and minimises detrimental impacts, including overshadowing”.

That DA was amended in April but the Planning Authority deemed that it did have to notify the community.

KBRG president Richard Johnston, a retired planner, called the proposal “gross overdevelopment” of the site, being four storeys in a two-storey area and exceeding the amount of floor space allowed.

The DA said the building would have a gross floor area of 5295 square metres, including 800 square metres of ground floor commercial tenancies and three floors of offices totalling 3983 square metres,

“The applicant can elect to not apply with the rule, but they have to meet certain criteria that are spelled out in the Territory Plan,” Mr Johnston said.

“That’s where the argument is.

“Frankly, I’m concerned that this is the thin edge of the wedge, and the sort of thing we can expect under the wonderful new outcomes-focused regime that the Chief Planner and the Minister keep talking about.” 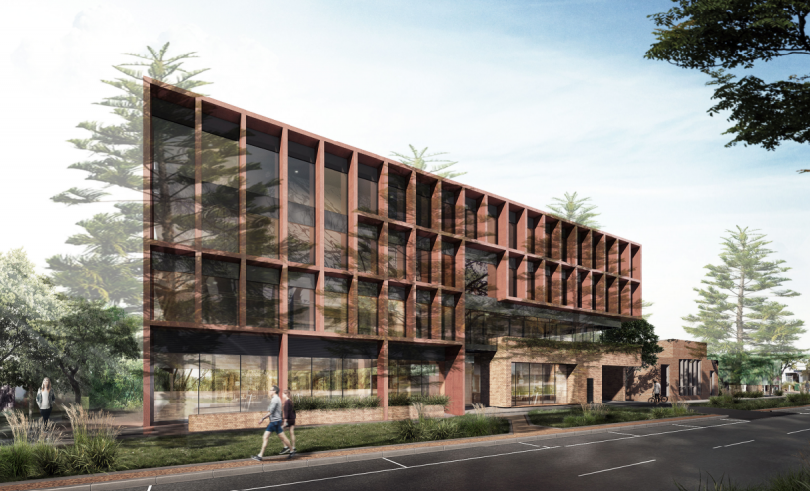 Mr Johnston said there was a lack of detail in the Notice of Decision and he criticised the planning authority for not notifying the public of the amended DA.

“They would have been well and truly aware of the amount of public interest in this so I find it amazing that they didn’t bother to notify [the amended DA], and then made a decision on it and haven’t actually made the amended application available until we jumped up and down and said we wanted it,” he said.

Mr Johnston said that given there were 105 submissions, mostly objections, there would be at least one appeal possibly involving several parties and possibly a slew of individual appeals.

He would also be talking to residents who would be immediately affected by the development.

The Notice of Decision listed a range of concerns, including building height, overshadowing, privacy impacts and traffic issues.

Some questioned the need for such a commercial project and the precedent it might set for future developments.

But the decision said that overall the development was permissible with impacts at a scale commensurate with the zone, site and surrounds.

“Impacts will occur to the surrounds but are of a scale and nature reasonably expected for the zone, the site and the locality,” it said.

A reduction in the height of the rear and upper floors to minimise overshadowing was considered but not imposed in light of the zonings and Territory Plan provisions.

The DA said the building had been sited to the west of the site to reduce overshadowing and overlooking the nearby residential properties to the east and south-east.

Geocon will need to lodge another DA to consolidate the blocks and a new lease reflecting that.

Conditions include a traffic control plan, a new verge and pedestrian path, which must take priority, and a desktop study of street parking within 400 metres of the site, given the proposal’s on-site parking shortfall. It only has 99 spaces when 140 are required.

Geocon must provide privacy screens to minimise impacts on neighbours.

The ACT Heritage Council said that Geocon must also provide an engineering assessment of proposed excavation works and their potential effects on the Post Office building, which has been provisionally registered on the ACT Heritage Register.

Of course they will 😂. NIMBYs

There are so many empty shops in the Kingston area already for commercial purposes. Why does there need to be another 4 storey building?

As a small business owner in the area, the lack of parking caused by this development is of real concern to us. Our patrons use the carpark at the rear of our building accessed through Eyre St which is already at capacity. During construction and at completion, the proposed parking outcomes will no doubt negatively impact our trade. I’m all for bringing growth to the area, but not at the detriment of existing businesses.

Wow -Andrew Barr stepped in to lower the development from 8 storey to 4 in a 2 storey zoning. This must be an example of the new outcomes-focused regime. Great outcome- for the developer!

Seems that what the residents consider to be the desired character has been ignored. This proposed building is right next to the provisionally heritage listed Post Office and would dominate it. It is also disrespectful of all the people who challenged the original DA to not let them know about the amended DA – did ACTPLA think they would not be interested?

Who cares what these useless residents groups think.

Jarrad Burke probably the people that live there!

Any where to park ?

Rob Chalmers yeah gungahlin then catch the light rail to civic then bus to the Kingston.

Andrew Pirie this is a great idea! We should be supporting better public transport through canberra and cut back on our insane over reliance on cars

Rob Chalmers there’s like, eleventy billion spots under the Supabarn.

Robert Knight Good to know haven’t been over that way recently.

Kingston is a special place and still has so much potential to grow into an even better one. The residents group seems to fight so hard to make sure no one else can move in and to keep people out, to the detriment to the businesses there. Kingston should be bustling but seems to be held back from it’s potential.

Chris Tony old Kingston was dead until Supabarn opened up. Look at it now, so much life!

Shows what a good development can do

Chris Tony key word there is good. Geocon’s rep is piss poor and rightly so

Jonathon MacLean fair comment but its more about investing and getting businesses in. Before Supabarn, the shops were deserted and a fair few business couldn’t survive.

Uy Nguyen but businesses need customers, and customers are attracted to great places. The new development has created a great ‘place’ where there was once a border vacuum in the shape of a servo and surface carpark.

Yes, the building that they first tried as an eight storey design in an area of two stories so that they could now try four and try to say that they listened. As if…. 🤦‍♂️

Exactly David. They just keep operating this way and the ACT Govt lets them. In it together with no desire to do consultation in the proper way. Such a sham process.

I hope they win. I am fed up with high rise being jammed into inappropriate contexts.

I hope they do too. The same again… every development approved regardless of what the community wants. Put in an over ambitious plan and pull back a bit so it looks as though they have comprimised.

And good luck with that