Another failure to navigate

Living here on Northbourne Avenue we’re continually amazed and entertained by cars trying to come *in* the *out* drive of our secondary car park. Sometimes those guys also fail to follow the road around, and then fail to stop when their wheels leave the road.

Today we had an extra special exponent of the art. 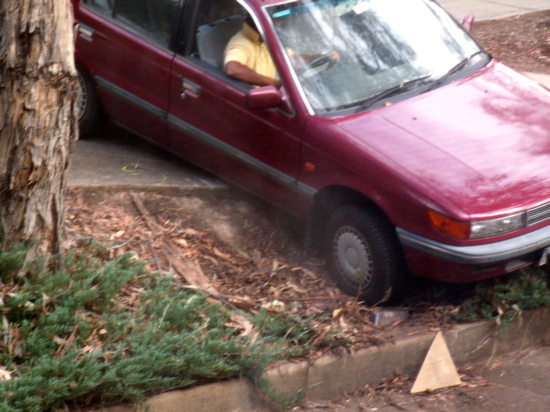 There followed a spectacular half hour where we were diverted from the cricket by their efforts to tow out of trouble as the smell of a burning clutch wafted over the Inner North. 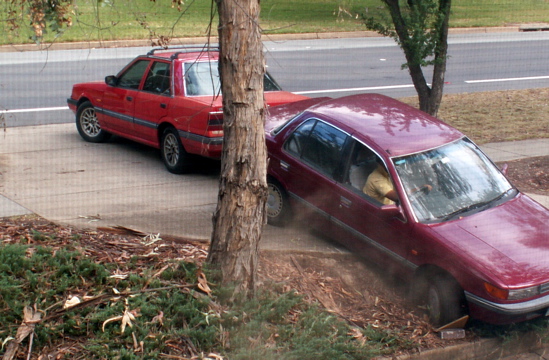 Note the clouds of dirt being raised by the spinning wheels.

Eventually our heroes triumphed and managed to not hurtle onto Northbourne while still coupled. 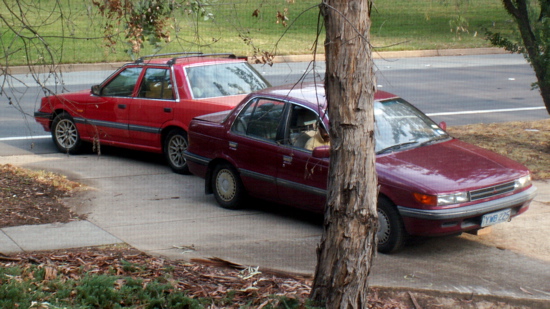 The red towcar is a 4cyl Pintara, the tail-light cluster gives it away.

Being a 4 cylinder Pintara would explain the burning clutch smell. The 6 cylinder engine in the Skylines wouldn’t have had any issues towing out the Galant (and would most likely have been coupled with an auto transmission)

i am pretty sure that’s a pintara – same body shape as the r31 skyline. great pix! and great schadenfreude! 🙂

Wow, what a bunch of silly billies!!

Jay – It has the lines of the ‘classic’ skyline. Mind you, it could be the 4 cylinder as Threeze points out.

threeze I think you’re right! Perhaps $300 would be a better estimate.

Yes Jim, using my super power I drove both cars and took all the photos and then wrote a story about what a douche I am.

i think its even worse than a Skyline, its the 4 cylinder version, the dreaded Pintara!

I was trying to determine if that was a skyline or a MK4/5 cortina.

Ahh morto1980, you’re speaking my language. With enough speed cameras around we could have all the schools and hospitals and roads and dragways we want.

It would have been much better if the tow-ee slammed into the tow-er after being freed from his ditch.

One bomb pulling another, surely ASIO should be onto this.

Shirley Troy - 9 minutes ago
Hope the strengths of community spirit ,awareness and support continue when this Crisis is over. View
Scott Bowen - 11 hours ago
This is amazing news! View
Anne Atherton - 19 hours ago
Love our community spirit View
Property 46

Jacqui Donegan - 17 hours ago
Cooleman Court could (again) be a wonderful local precinct ... but it’s a mess - no parking, scrappy streetscaping, and a s... View
Angela Davey - 19 hours ago
Why not open shops in Coombs. Wright Denman Prospect before building more car parks. View
News 9