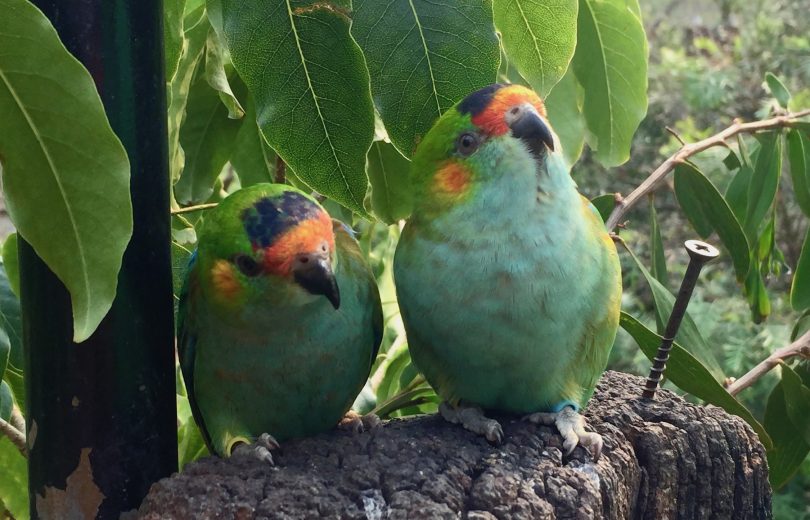 Steve Sass is a little sad. As we wander around his bird park, On the Perch, he tells me of the agonising decision he and wife Linda recently made to close their park.

“We’ve been grappling with this since the March 2018 Tathra fire. Even though it sailed right past us, we lost birds then, from smoke, from stress and then from the stresses of big helicopters coming in and out to take water from the dam just here.”

Opened four and a half years ago, the park is slated to close its doors on 14 February.

“While it is devastating for us, since we announced it there has been some beautiful feedback and support.,” Steve says.

The decision to close was precipitated by the very recent fires across the region.

“This time around we have already evacuated ourselves twice, and evacuated around 50 birds.

“We have 800 birds, and 16 enclosures, so there is no way to evacuate everything quickly, even catching them is stressful. We still lost a couple of those 50 due to stress and smoke.” 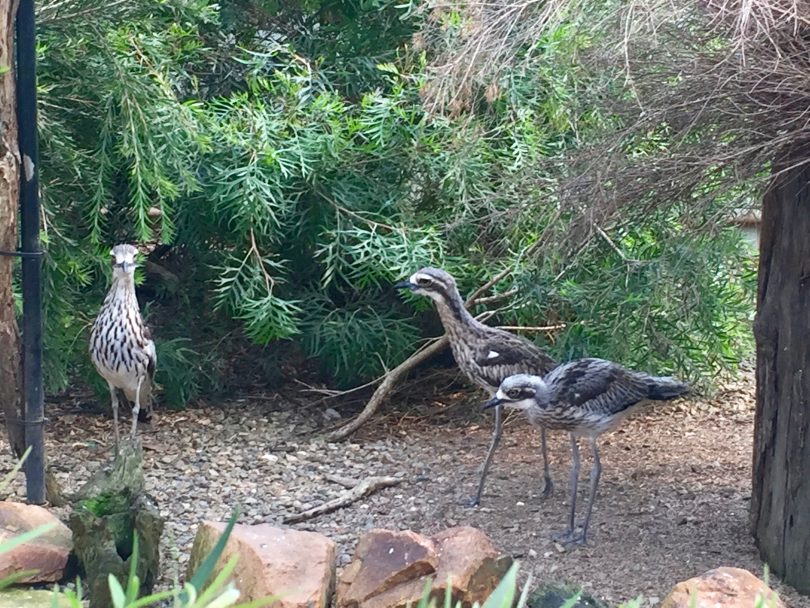 The beguiling stone curlew family, bred at On the Perch.

Steve and Linda have given much thought to the closure, running through “hundreds of scenarios” on minimising risk, and in the end decided the risk of staying open was not acceptable.

“I actually couldn’t live with myself if something was to happen.”

For this family it’s not about the finances, “sure we are taking a hit”, Steve says, “but every business on the coast is. There are many businesses in terrible positions”.

On the Perch is a happy place for many people from near and far, and Steve believes it’s because of the intimate experiences, the many walk-in cages, allowing for un-scripted, close-up encounters.

Steve explains: “We provide a connection with nature here. The model here is that people have very close experiences with nature.

“We’ve also had great success with breeding endangered species. But getting people to love birds and wildlife generally, that’s what we’re really proud of.”

The hard work won’t stop when the doors close, though. It will take Steve, his family and workers around three months to work through the closure.

“We’ve just started work on our closure plan” he explains. 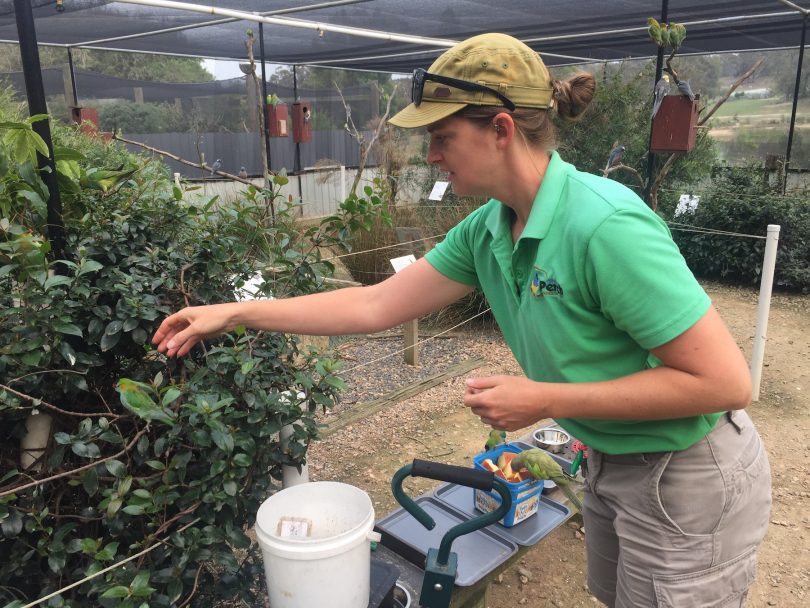 Keeper Alex Metcalfe came to live and work in Tathra just over a year ago.

It will take be a three-month journey to completely dismantle the park and send all the residents off to new homes. And then there are the many staff Steve will assist in moving on to other ‘keeper’ roles elsewhere.

“We’ve had contact with other sanctuaries and bird parks and zoos about what animals they might be interested in. And there is not going to be a problem finding a home for every single animal here. We will announce that as we go.”

Of particular interest are the park’s star attractions, young Cassowaries Gorge and Adelaide. Here Steve does look a little sad.

“These creatures have really captured a part of my heart, so the aim was to find them a place that we’re very comfortable with.”

Steve wants to emphasise that the park is open as normal, and the experiences will not change in any way.

“Not one animal will leave the park before the 14th of February, the cafe experience will change a little as we won’t be offering the same range, but otherwise, we’d love everyone to keep coming and enjoy the place.

“We’ve got our Stone Curlews, which we bred in captivity. This is the first breeding since the March 2018 fires, they initially went into a bit of a meltdown from stress, but we have mum dad and the new little one, they’re very popular birds.” 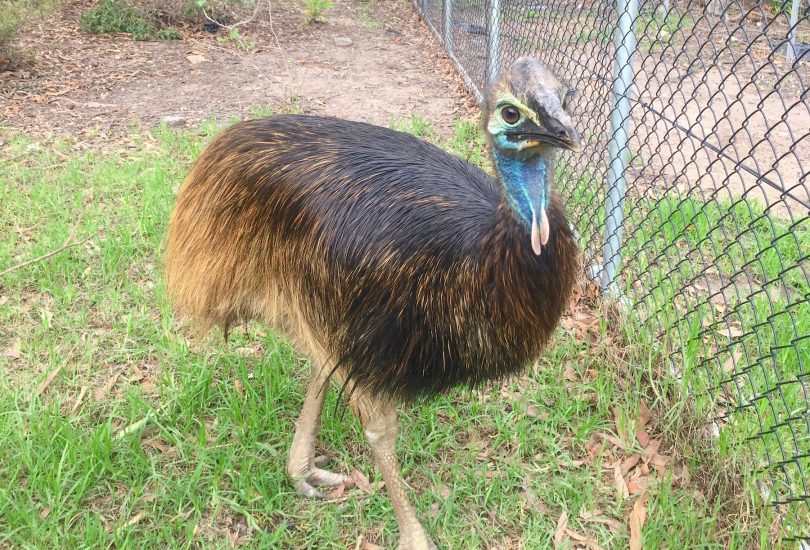 “I am so pretty” young Cassowary Adelaide seems to say.

And then, of course, there are the famous and fascinating Gorge and Adelaide. Originally from Adelaide, this striking pair were the only cassowaries to be bred in captivity last year.

At 12 months old, this brother and sister are already awe-inspiring. 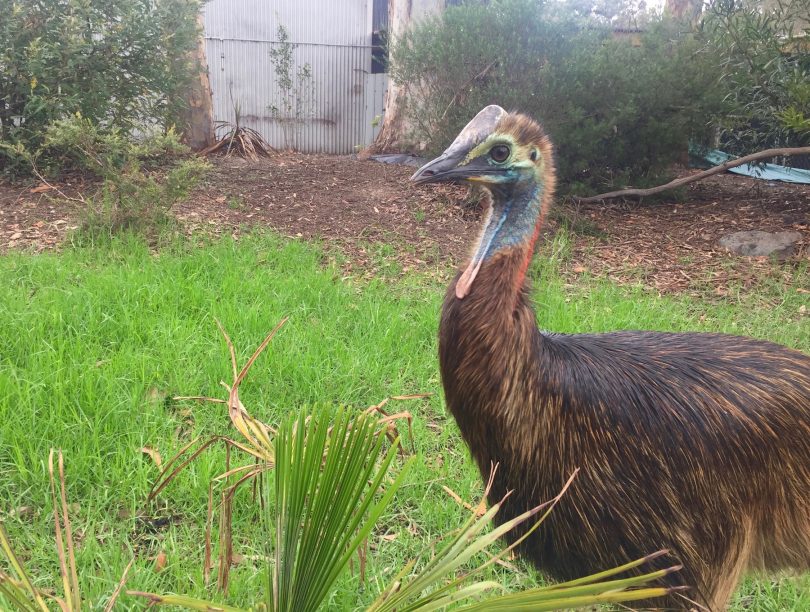 “We are very proud of them. I’m very excited for their future. Being such a long-lived bird they have a real future ahead of them. They’re going to a place that will really highlight the conservation status of the Cassowary,” Steve pauses, “as people we really need to start doing things and start thinking about our environment full stop. We need to have some serious conversations.”

The larger Adelaide is enjoying her breakfast and the conversation somehow turns to Cassowary poo.

“It is very rich, and there at least 100 species of plant, that we know about, that will not germinate unless it’s been through the gut of a Cassowary.

“The Cassowary is considered a keystone species of the rainforest, if we lose Cassowaries, we lose all those plants to start with.”

It makes one think about the connectedness, the finely balanced networks of nature and the value of being able to observe and learn about such rare creatures.

In less than 15 minutes in this park, I have heard many stories and fascinating details, been educated a little. Been a little intimate with nature.

“I’m sad, but proud,” says Steve. “If people come here and get a connection and really start to think about birds and wildlife, then we’ve done some good. I have no regrets.”

On the Perch is located at 343 Tathra Road, Kalaru. Visit On the Perch for opening times and entry fees.

On the Perch will be open until close of business on 14 February. Visit their website for more information (and how to donate to their Go Fund Me closure fund) here.

Julie Macklin - 4 hours ago
No, not everyone has young children. If someone wants to stay away from things on Sunday, they can now. They can make their o... View
Christopher Cuba Rabanal - 6 hours ago
How about a six day week with every Sunday shut. Where everything is closed in a Sunday Sunday is family Day ?... View
Valerie Foster - 9 hours ago
Been talking about that for years. View
Community 38

JS9 - 5 hours ago
So Tim, where is anyone telling you you have to buy an EV now? Noone is, and most will purchase an EV when it stacks up for t... View
Futureproof - 12 hours ago
Great, I'll spend $70k so I can save on my electricity bill View
News 127

Colin Ball - 7 hours ago
Why do they get game consoles?it's meant to be a place for punishment not reward, what about the people who have worked hard,... View
Steve Whan - 8 hours ago
Just curious, do instigators of damage have their terms effected due to vandalism caused? I dont know. Just curious. View
Inca Serrated - 10 hours ago
Not a single mention of the conditions that prisoners are living in... Lockdowns, no family contact for over a year, no meani... View
Lifestyle 14

@The_RiotACT @The_RiotACT
Edgar's has added another restaurant at its iconic location in Ainslie. The Inn offers a European bistro feel with a dark, moody atmosphere ... and the mash of Sophia Brady's dreams https://t.co/AoXEOQ5I8Y (8 hours ago)

@The_RiotACT @The_RiotACT
Around 250 people enjoyed a strip and dip in freezing temperatures this morning for @Lifeline_ACT's fifth Winter Solstice Nude Charity Swim! Were you there? https://t.co/8AcpLjpUyp (9 hours ago)