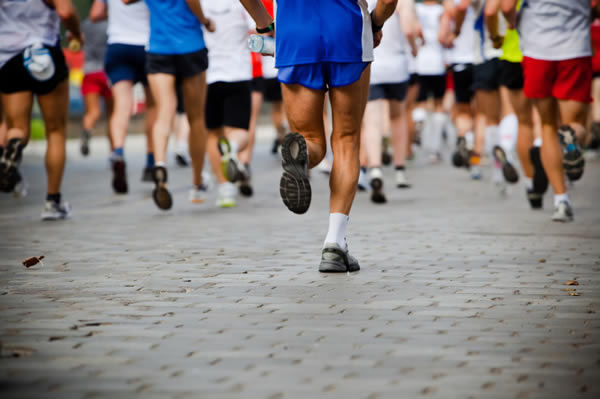 I was recently reminded that registrations for the Canberra Time Fun Run are open, and this sent me on a stumble down memory lane, thinking about my first CT 10km, and fun runs more generally.

‘Fun run’ is an oft-maligned term. Granted, it seems an oxymoron. As far as I understand it, a fun run is a run/race that is not for professional athletes as such and is meant to be non-competitive. That said, there are often small prizes for the winners at the bigger runs I’ve been to but it’s meant to be amateurs competing and most people in the crowd probably don’t care anyway. Instead fun runs are usually an opportunity for fundraising (as is the Canberra Times Fun Run), and are meant to be an enjoyable morning out.

So are they? How can running be fun, it is hard work, right? Well, yes and no. Personally, I’m always a bit nervous at the start of a fun run and my internal monologue during the first five minutes of any run is usually ‘ugh, this sucks, why did I think this was a good idea, I want to go home’ etc. Once I get past that stage though, more often than not, it actually is something resembling fun. Here are three things that make it fun for me:

The vibe of it, man – you’re running with a crowd. At my first Canberra Times fun run I was struck by the very cool sound of literally thousands of feet striking the bitumen as we set off – it was audible over my ipod, which I switched off for a bit to better enjoy the sound. Another thing about the crowd that I like is that there are people of all ages, sizes, shapes and speeds taking part. You’ll see clubs and teams in matching t-shirts or crazy outfits (there was a dude in speedos one year, hard to forget once seen). The momentum of the crowd is a really positive feeling, plus it distracts you from any momentary urges to stop and walk.

A run with a view – we all know that Canberra is a pretty town, and seeing it on foot as you run through it offers some new perspective on a road well travelled. Admittedly, the Canberra Times Fun Run is probably not the prettiest fun run in town – the ones around any of Canberra’s lakes are a bit more scenic – but you do get to run on usually forbidden roads (which are closed to traffic for the duration. I’m not saying it’s also satisfying to see cars backed up waiting for runners to finish using the road, but I’m not saying otherwise either).

We are the champions – oh, it’s good to finish, particularly if you’re using the fun run to realise a goal. There’s no nice way to say this – I spent the first thirty years of my life being a fat slob. I used to tell my friends that I’d only run if someone bad was chasing me with a knife. When this began to make me really unhappy and I decided that it was time for some change, I set myself a fun run as a goal. It was a 4km Australia Day fun run around Commonwealth Park, and yes I found it tough, and yes I was very slow relative to my less-slow times now, but I still remember the absolute high I felt from just finishing without having to stop and walk any of it, and that was maybe eight years ago now (I also remember being approached by some people from the St John’s ambulance crew asking if I needed assistance – I have one of those faces that gets very red, some would say puce, from exertion. Or wine). I’ve never been to a fun run yet that didn’t have some sort of food for runners at the finish – it’s usually fruit but I remember a run once with hot cross buns at the end. One year, my post-run showbag from the Canberra Times included a massive bag of those glucogel jelly beans you get from chemists, when my fellow running mates had only small bags in theirs. Happy times.

This year the Canberra Times Fun Run is on Sunday September 7. There are 5km, 10km and 14km options, all of which share a common finish line at Rond Terrace (which is the bit right at the bottom of Anzac Parade, by the water). Even if you’re not a runner yet you have time to train. There is a CT Fun Run training program you can use – it’s available on the website. There are also lots of beginner run programs – like the Couch to Five program to get you off the couch and running 5kms in no time, and like they say ‘there’s an app for that’. You’ll find plenty of guides just by looking. Something I find useful is running with other people and Canberra is a good place for that too, there are a couple of running clubs to try out (like YMCA, for example) or you could start your own.

I’m giving the 14km option a go this year – see you there (I’ll be the one with the magenta-hued face)!

Angela Hutton grew up in Canberra and sees no good reason to leave. She spent the first thirty years of her life mostly sitting down, and it showed. She has since learnt to enjoy an active lifestyle and is a healthy example of how you can balance exercise and good choices with sloth and gluttony. Yes, she can run 10kms, and likes to box and do other sweaty things but she’s still a fan of sitting down and she’s not interested in superfoods, counting calories or going organic.

Answer: yes, although a little insanity does help.

I have yet to see a smiling jogger.

Parkrun is perfect to get into regular timed runs – and best of all it’s free: http://www.parkrun.com.au/

Chris Cross - 1 hour ago
Exactly right and they need to be. Adapt or die. Small business is constantly being challenged in that way... and its an inhe... View
Sharee Schultz - 6 hours ago
Chris Cross states organise their restrictions, not federal 🙄 Look at Victoria! Also, no government can control stupid peo... View
Mazzie Woodward - 6 hours ago
Chris Cross and so be it... wow! People work so hard to open a business, they save, borrow money, take risks, remortgage home... View
Opinion 25

Julie Macklin - 4 hours ago
Veronika Sain I purposely only said houses, not flats. All houses have room for a compost bin, even with a tiny garden. Unles... View
Veronika Sain - 5 hours ago
New houses and flats don’t have gardens perhaps. View
News 52

Bethany Williams - 6 hours ago
Kylie Wylie check us out at the Canberra Progressives, Kylie! We are a fantastic alternative to voting Labor. We don’t have... View
Jim Hosie - 7 hours ago
Everyone should be extremely concerned. A weak opposition means a weak government. You cannot suggest that the current crew a... View
Johnathan Davis for Brindabella - 10 hours ago
That’s wonderful Kylie! That would have been Jordan and Laura Nuttall for Brindabella! Feel free to message or call me anyt... View
News 3

Roberta Lynne Anning - 9 hours ago
I hope they're all ok. View
News 8

Peter Pamphilon - 11 hours ago
Barbara, John.....? View
Monique Neejchee Jenkins - 12 hours ago
Are these same people damanding a high school and other council spending in the community? View
Charlie Stuart - 12 hours ago
Looks like they didn’t have much luck View
Sport 1

Lisa Sly - 12 hours ago
Frank is one of the true greats! He gives so much back to the Canberra baseball community in ways this article doesn’t even... View
News 27

Annette Milnes - 12 hours ago
As I mentioned before handicapped people are only a small proportion of the people who will have trouble with public transpor... View
News 8

chewy14 - 12 hours ago
The smell of Nimbyism here is stronger than the smell of rotting green waste in the gross pollutant trap right next door and... View
show more show less
*Results are based on activity within last 7 days

Canberra Liberals' leader Alistair Coe has admitted there was a "breakdown" in the party's vetting system after Peter McKay was...
Breaking 56

Canberrans with valid travel permits have been stranded at the Victorian border after NSW authorities changed their access requirements at...
News 52

Chief Minister Andrew Barr has written to Prime Minister Scott Morrison, warning him that Victorian parliamentarians who are planning to...
News 39

ACT Labor has pledged to create a city-wide food waste collection service which will reduce carbon emissions and create 200...
News 27

If anecdotal evidence is any guide, owning a pet made lockdown bearable for thousands of Canberrans. Now's the chance to...
Opinion 25

@The_RiotACT @The_RiotACT
Readers were evenly divided on whether or not we should all be wearing masks in public. But as politicians arrive back in Canberra, should we be stopping everyone at the border? https://t.co/YvLlKhzuDQ (7 hours ago)

@The_RiotACT @The_RiotACT
Wondering what to do this weekend? Here are 9 great ways to enjoy yourself, including the ultimate selfie opportunity, an Art for Carers event + a discussion with coronavirus doctor Norman Swan https://t.co/klduNZMj8g (8 hours ago)

@The_RiotACT @The_RiotACT
After almost a week in limbo at the NSW-Victoria border, weary and frustrated Canberrans began arriving home in the ACT this afternoon. They now enter 14-days of mandatory COVID-19 quarantine https://t.co/gRTLeZwuTH (10 hours ago)