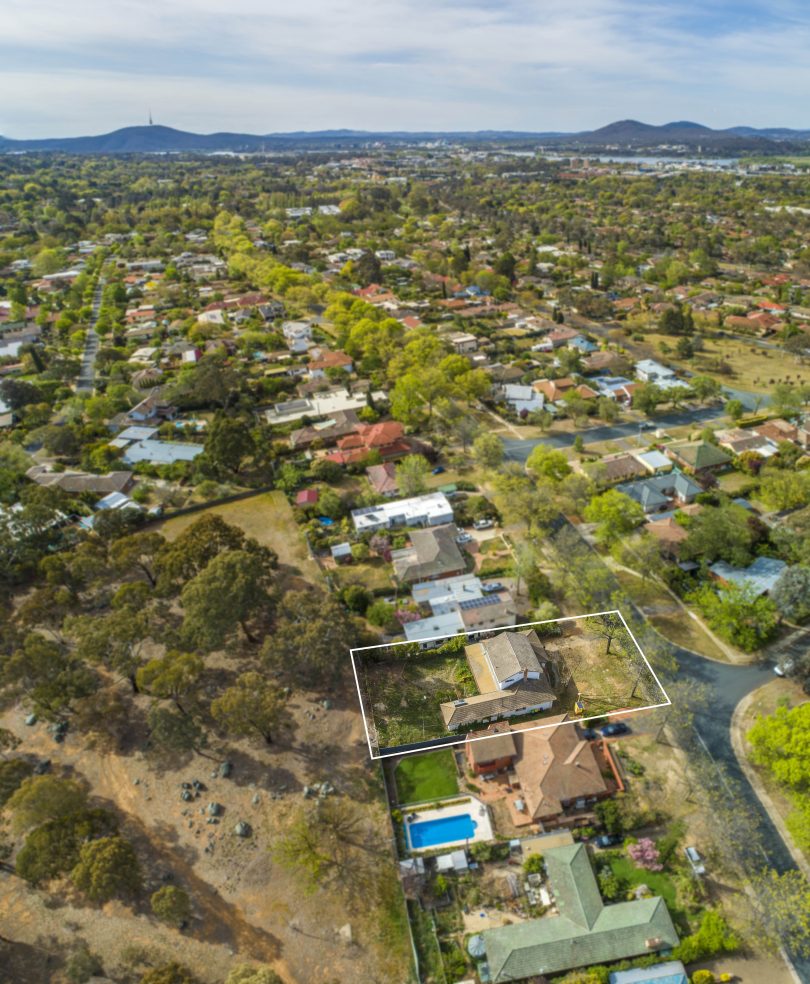 In an elevated position this Griffith home is full of old adornments and is likely to be replaced by a new home capturing the views. Photos: Supplied.

An auction early next month will be an excellent barometer of how the prestigious inner-south Canberra market has fared over the past 12 months.

A 962-square metre block with an old six-bedroom, double-brick home ripe for demolition was last auctioned only 12 months ago when it fetched $1.2 million. It will be auctioned again on 9 November at 118 La Perouse Street.

The winning bidder is likely to knock over the old dwelling and build a new family home. Rarely do large blocks of land become available in inner-south locations these days, and this one is in an elevated position. 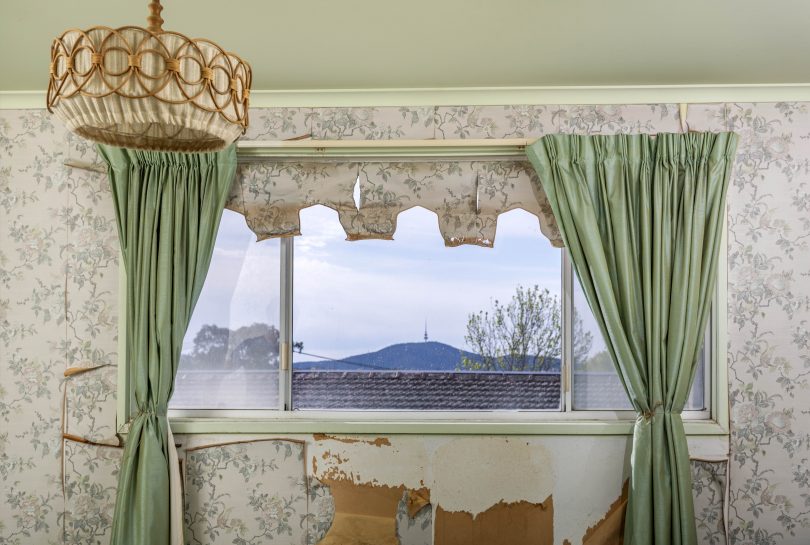 The old place was built in 1957, the same year the National Capital Development Commission was established to plan and develop Canberra. Once a grand home, it was likely built to attract a senior public servant and their family to the-then very bush capital. Senior bureaucrats were being offered positions to help the territory’s progress, years before Lake Burley Griffin began filling with water, and a year before the first permanent office was built in the Parliamentary Triangle.

Listing agent Leanne Palmer of Belle Property Kingston says these days the home is not liveable. An elderly man who sold it about a year ago had lived there for some time, but was not the original owner. “Back in the day it would have been a massive home, with three bathrooms, quite grand,” Leanne says.

“In the lounge room, gold gilding can be seen around the bottom of the cornices. There’s a beautiful fireplace and high ceilings. Most of the chandeliers have been taken down, a few that remain show they were pretty special,” she says. 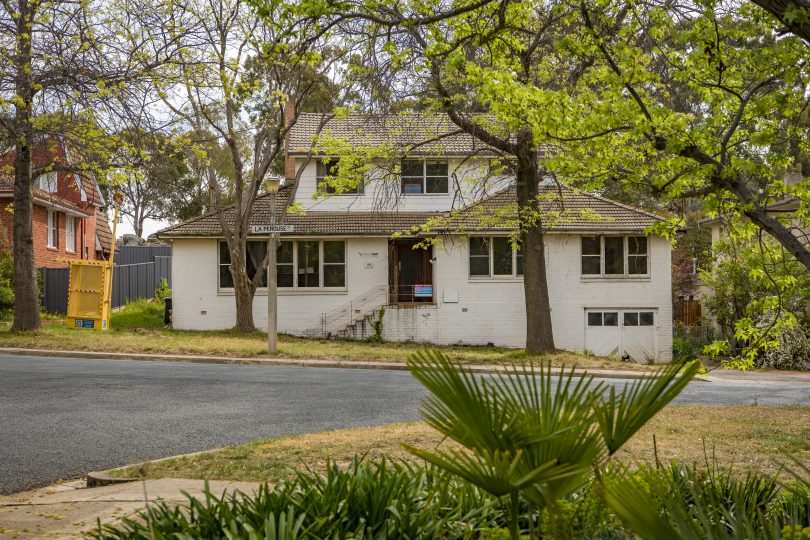 “People won’t be torn between ‘should I keep it, or not,’” real estate agent Leanne Parker says. “It is a fairly easy answer, it is going to be knocked over,”

“The property sold just over 12 months ago to the current owner who was not going to knock it down, they were going to save it,” Leanne says. “They have gone to the point of having an engineer’s report, structural architects to redesign it and builders to quote. They were just about to start the re-build. Construction fences were up, it was all ready to go,” she says.

As can happen in property projects, a sudden change of circumstances abruptly ended the project and the owner was unable to proceed. “They have popped it straight back on the market,” Leanne says. “The new buyer could take advantage of what they have already put in place. Or someone might start again, which I suspect is what is going to happen. It would be very costly to restore something like that,” she says. 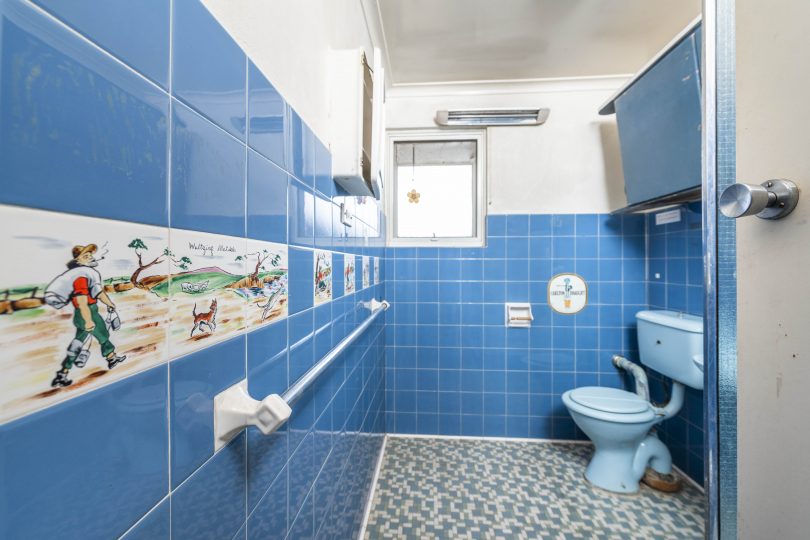 One of three bathrooms in the once-grand residence.

“That area attracts a lot of families in particular because of schools,” Leanne says. “It is quite an eclectic mix from the old 1970s architectural styles, there are a lot of those around, then the new builds which are mostly double-storey,” she says.

The old brick-and-tile-home at number 118 backs on to La Perouse Park, a favourite roosting place of the local peacocks.

“People won’t be torn between ‘should I keep it, or not,’” Leanne says. “It is a fairly easy answer, it is going to be knocked over,” she says. “Ever since I have had it on the market I have had people contact me to say, ‘I missed out on that the last time, I saw that it sold, how good that I can now have a second opportunity?’ It will be really interesting to see what the value does over the 12-month period; the market has changed,” the agent says.

The location is hard to beat. Red Hill Primary School, St Edmund’s College, St Clare’s College and Canberra Grammar schools are all nearby.

Then there are the restaurants: Red Hill, Manuka and Griffith shops and restaurants are all fairly close. The leafy inner-south, with wide avenues, walking and bike trails, all close to speciality shops and services is at odds with the sad and dilapidated state of the home. This is underlined in one of the photographs of the home’s interior, showing torn, falling wallpaper framing an excellent view of Telstra Tower.

No doubt the opportunity and potential won’t be lost on the successful bidder at 9 November’s auction.

Big block backing a reserve in Griffith that will sell for about the same price per square meter as the ACT gov is selling blocks in Gungahlin and Molonglo.