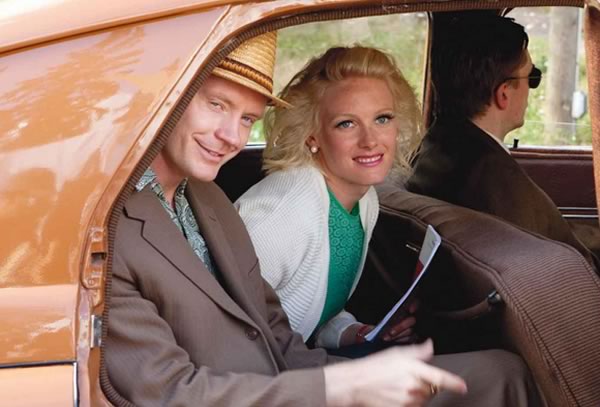 Thanks to The-RiotACT, and the organisers of the Scandinavian film festival, I had a double pass to see a film of my choice and ended up plumbing for a Finnish film, ‘August Fools’.  While in some sense the title makes sense, I am still none the wiser why it ended up with that name; but I was smitten with the whole affair.

This film is a romantic comedy, though not in the hollywood sense.  It portrays love lost and rekindled, rekindled anew and from unexplored depths, all against a backdrop of 1962 communism, when a Czech jazz trio with a young minder are permitted by the closed state to travel for a Russian communist-organised ‘peace and friendship’ festival in Helsinki.  One of the musicians, Jan, looks up a woman he fell in love with when he was there many years ago. She is a milliner [the costumes and props were stunning!]  who had since had no contact from him so assumed he had forsaken her. Her niece was working in her care and fell for the group’s minder when visited elsa in her shop.

Elsa, a clairvoyant as well, now lives next door to a senior official of state, head of police and security who has lost himself in a newly found love for his housekeeper, who ‘disappeared’ after he sacked her.  The story rollicks between the three stories, and the story of the group’s experiences in the ‘capitalist’ society and captures the tensions between socialism and capitalism, and capitalism, at many levels.

Of course the story has a ‘cliched’ ending, which was entirely forgivable in the context of the film, and, in a wonderful twist for me, ended in Norway [which is the country i referenced in my response to the original post by which i won the tickets!]…

In all, a beautifully portrayed story, wonderfully and poignantly illustrating the political tensions of the time and working across many levels, with generous doses of laugh out loud comedy, brilliant costumes and of course – with the jazz band the centrepiece, a great soundtrack.  Lee Harvey Oswald even makes an appearance!  I’d give this four stars; and if the other films in the festival were of this quality – and I’m sure they likely were – then I keenly await next year’s offerings and commend them to you.

Was glad to see you’d won, Astro, and thank you very much for the review. The title may simply be a reference to the time of year – in Finland people go a little nuts come July and August, hence things like wife-carrying and air guitar championships happening (not to mention a festival of some kind or another somewhere every single summer weekend). Will keep an eye out for this on dvd.

that’s what i figured, and in some ways perhaps the serious political dichotomy was being played off in the ‘fools’ bit – a bit cryptic, then. i’d forgotten about their air guitar festivals and wife-carrying. i wonder if anyone has ever held both titles at once…

i looked at ‘ego’ as an option, hc – couldn’t make the times work, but the write up looked good. glad you enjoyed it.

nah, i just thought i might as well. one’s enough. what did you see but?

It was very good. A rom-com, too, also with an obvious ending, but the journey getting there was good fun.

nah, i just thought i might as well. one’s enough. what did you see but?

Was glad to see you’d won, Astro, and thank you very much for the review. The title may simply be a reference to the time of year – in Finland people go a little nuts come July and August, hence things like wife-carrying and air guitar championships happening (not to mention a festival of some kind or another somewhere every single summer weekend). Will keep an eye out for this on dvd.

that should be, ‘between socialism and communism,…’

Tom Adam - 9 hours ago
Natalie the Woden area around the bus depot. (Where they had to due to land sale agreements). Not the Phillip business Centre... View
Natalie Roseworn - 10 hours ago
Tom Adam they announced some major refurbishments for Woden/Phillip not long ago. View
Lucy Irene - 18 hours ago
Mmm, not sure why ‘rainbow’ roundabouts could be an issue, curious! View
Property 20

John Hutch - 13 hours ago
I thought that these protests were a disgraceful display of the left-wing mentality and agenda to maintain oppression and vic... View
Capital Retro - 14 hours ago
"marginalisation by choice" being the PC term for "victim industry"? View
Spiral - 17 hours ago
Does anyone have accurate recent stats on how bad the problem really is: This article: https://www.news.com.au/national/black... View
News 36

@The_RiotACT @The_RiotACT
St Benedict’s in Queanbeyan has been helping locals for more than 15 years, offering meals, friendship, advocacy & support to those who need it most https://t.co/l22RO7R84o (48 minutes ago)