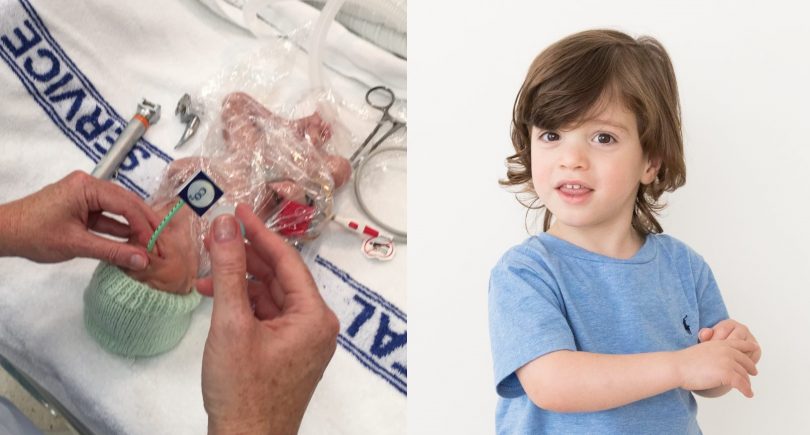 The Bake for Babies appeal helps vulnerable newborns like Kritstijan to survive and thrive. Photo: Supplied.

Nothing says love and nurture quite like a homemade cake, a batch of biscuits, or a pie. And there’s perhaps nobody more in need of love, nurture and protection than a newborn baby, so the invitation to Bake for Babies is one of those things that intuitively makes sense as a fundraiser for the region’s neonatal intensive care unit.

The three-month-long event is run by the Newborn Intensive Care Foundation (NICF), whose founder Peter Cursley has a very personal reason for fundraising.

Twenty-five years ago, his daughter Hannah was born blue, unresponsive and with severe brain damage as a result.

“When Hannah was three days old, we were gently counselled that nature should take its course and she died in our arms. We were so grateful to the hospital nurses and doctors – the clinical director was passing us tissues while he was wiping his own eyes. You’d think people would be hardened but they cannot help but get involved. So 25 years ago we decided to do something.”

The result was the Newborn Intensive Care Foundation, which has made a major contribution over a quarter century to the health, wellbeing and longterm prospects of hundreds of premature Canberra babies.

Peter believes the government should be responsible for essential equipment, so the Foundation’s focus is on the expensive extras that can make all the difference in treatment.

“For instance, babies in humidi-cribs risk the vessels in the back of their eyes bursting and need to be carefully monitored. Previously, they needed intensive care transport to Sydney. We bought an eye laser for here at the cost of $70,000 and last I looked that monitor had saved the sight of 22 babies.

“These kids have their eyesight, which is wonderful for them and their parents. But it also costs $35,000 for a guide dog. It costs $12,000 for a blind child to start school, so the ongoing saving on the welfare purse is remarkable.

“I really wish the government would get it that if you nip things in the bud, it’s better for everyone in every way. But it often seems that little babies don’t have a voice.”

This year’s Bake for Babies coordinator Tina Martinovic knows just how tough it can be. Her son Kristijan was born at 27 weeks by emergency Caesarean, weighing 1.185kgs and with all the odds stacked against his survival. He spent three months in neonatal intensive care and Tina describes the entire period as hugely traumatic for her family.

“When we were told the baby had to come out as a matter of urgency, it was truly a devastating, paralysing moment. I begged to keep him in for another week, even one day as I knew, every minute, hour, day or week in utero makes a difference. The extremely sensitive, heartbreaking and sometimes painful environment of NICU was somewhat overridden by the professionalism, level of care, passion and commitment of the NICU doctors and nurses, which was overwhelmingly impressive,” she says.

Today Kristijan is a thriving three-year-old and Tina is coordinating Bake for Babies to express her own gratitude and continue fundraising for the very best equipment for the Neonatal Intensive Care Unit. The aim this year is to raise $60,000 for a state-of-the-art ventilator.

Participants can sign up to Bake for Babies on the NICF website here. They are free to bake and fundraise for their campaign however they like. 100 per cent of all money raised by the NICF funds medical equipment, research, and nurse education to help sick newborn babies of the Canberra region. Bake for Babies officially starts on 1 July and runs for three months.

Peter and his wife are about to move to regional Victoria, but the good news is that the NICF will expand to help hospitals in those areas as well as Hobart, while operations are organised to continue here.

Louise Flint - 6 minutes ago
James Daniels I was sent there for advice before I took a redundancy package. They ignored my superannuation and taxation que... View
Patrick Barrett - 4 hours ago
Dylan your fault View
Sonia Irwin - 8 hours ago
Been watching this as a client. Gotta say a bit nervous is an understatement View
News 22

Toby McLenaghan - 39 minutes ago
Peter Marshall well it will be better then before. 🚴🏻💨 View
Marion Rae - 8 hours ago
Election year in a bellwether seat View
Hope Marie - 9 hours ago
Grace Stefanac now I can't crash on it wow View
News 15