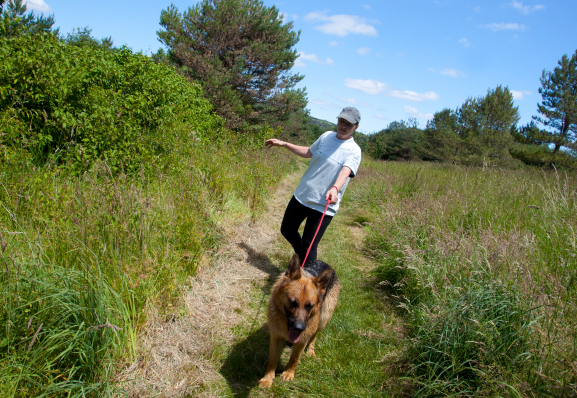 Dogs are prohibited from playground equipment and barbecue areas in the ACT from today, as well as being required to be on a leash on all paths, cycleways and in all major parks.

The ACT Government has introduced the law around playground and barbecue areas for public health and safety reasons, and considered walker and cyclist safety in introducing the path/cycleways change.

Dogs can be off-leash at sporting grounds unless formal sport is being played or a major event is taking place.

Minister for Territory and Municipal Services Shane Rattenbury said the changes had been made in response to community feedback and aimed to make it easier for owners to know where they can and can’t take their dog, both on and off the leash.

“Specific changes come into effect at Lennox Gardens, Weston Park in Yarralumla and Black Mountain Peninsula, which will change from dog prohibited to dog on-leash areas, making them consistent with other major parks in Canberra,” Mr Rattenbury said.

“William Slim Drive pedestrian parkland has been changed from an on-leash to an off-leash area.”

A three month trial begins today to allow dogs to be off-leash at Blaxland Park (behind the shops in Griffith) from 6pm to 7am each day.

“This will be the first time a timeshare arrangement has been undertaken in the ACT and will be in place from Monday 11 January to Thursday 31 March 2016,” Mr Rattenbury said.

Mr Rattenbury said while dog owners need to be mindful of their responsibilities, everyone using shared paths and open spaces should be mindful of others, whether that meant keeping left on the footpath or slowing down on a bike when you see a dog ahead.

“Dogs need to be kept under control so they do not interfere with other people’s enjoyment of public spaces. As a general rule, if people are ever in doubt they should keep their dog on a leash. Signage will be erected at locations across Canberra, such as ovals, to help educate the community about how the areas can be used.

“People can provide comments on the changes to dog exercise area maps via www.timetotalk.act.gov.au by Thursday 31 March 2016. The website also lists the sites where usage has changed.”

Mr Rattenbury said the ACT Government will continue assessing other recreation areas identified during a 2014 consultation to determine if further changes would be made.

The new laws seem pretty straightforward and common-sense to me. I just hope that Rangers will be doing patrols to check on compliance because every time I remind the owners of off-leash dogs that they are not in an off-leash area, I am worried that I’ll cop a punch in the nose !.

Had one of my ‘on leash’ dogs attacked by an off-leash dog last year (in an on leash area) and the owner couldn’t see that the whole thing might have been avoided if he was following the rules.

Please police the rules, otherwise the changes will be pointless.

About time some sense prevails with control of dogs. Now fine those who don’t clean up after their
dogs. Can’t understand why people keep large dogs in small yards particularly in the climate of Canberra. By all means walk these poor dogs on leash but be prepared to clean up the mess they make.
I’m also scared of big dogs and always see off lease around streets in Gungahlin area while owners wait for them to leave a deposit. Of course owners just pretend not to see it.

My young children have received quite a fright from being apoproached by middle-sized dogs off leash in parks where dogs are supposed to be leashed. The owner seemed unaware of the scare he had caused. This was inconsiderate and selfish behaviour, IMHO.

About time some sense prevails with control of dogs. Now fine those who don’t clean up after their
dogs. Can’t understand why people keep large dogs in small yards particularly in the climate of Canberra. By all means walk these poor dogs on leash but be prepared to clean up the mess they make.
I’m also scared of big dogs and always see off lease around streets in Gungahlin area while owners wait for them to leave a deposit. Of course owners just pretend not to see it.

We’ve had a look at the ‘new’ rules and dog on leash/off leash areas on the new online dog off leash areas map at http://www.tams.act.gov.au/city-services/pets/dogs/recreation-with-my-dog. They look very sensible and a good compromise for all users. For example, it makes sense for dogs to be on leash on bike paths. It’s also good the Government is willing to trial allowing dogs on leash in new areas. For the record, children’s playgrounds and BBQ areas were previously dog prohibited areas – this isn’t new. Likewise with access to sporting grounds – off leash unless formal sports being played. For people interested in safe off leash walks with their dogs around Canberra, go to http://www.canberradogwalks.com.au for free information.

Big dog, little dog, on leash, off leash, owners PLEASE take a poo bag with you.

Dog s%^t is a terrible pollutant in a public space 🙂

Big dog, little dog, on leash, off leash, owners PLEASE take a poo bag with you.

Dog s%^t is a terrible pollutant in a public space 🙂

Glad playgrounds are now dog free, though I am not thrilled that previously dog-free parks like Weston Park, where I could relax in peace, are now going to be dog zones. I wonder how they are going to manage the BBQ areas in Weston Park.
I am scared of big dogs, and in my experience there is a proportion of dog owners who take their dogs off the leash when they think they can get away with it, irrespective. I hope there will be ranger patrols to check on compliance.

Yuri Shukost - 1 hour ago
Ankle monitors and home detention is the only way I’d support this. View
Isabella Goyne - 13 hours ago
If they’re in for non-violent offences, it should be at least considered. View
Ekaterina Smirnova - 2 days ago
What could possibly go wrong? View
News 25

@The_RiotACT @The_RiotACT
As toilet paper becomes harder to find, a small group of Canberran’s have come together to build community pantries across the region https://t.co/PTNH4XfXSb (9 hours ago)

@The_RiotACT @The_RiotACT
A bitterly disappointed Village Building Company has gone straight to the ACT Civil and Administrative Tribunal in a bid to get its $140 million Weston development moving again after the shock knockback of the project https://t.co/vH0nfRuZHJ (11 hours ago)