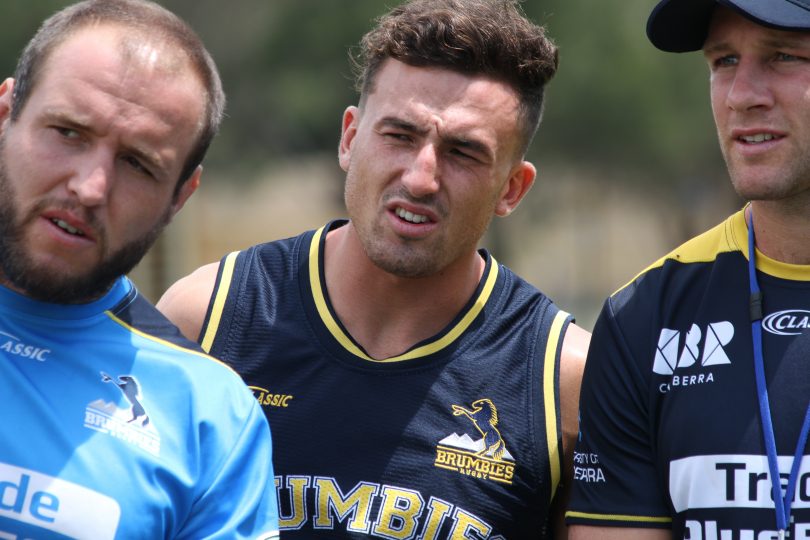 Tom Banks is ready to face his old side – Photo: Supplied by Brumbies.

Brumbies full back Tom Banks said he hasn’t got a point to prove against his former club as the Brumbies face the Reds at Suncorp Stadium on Friday night.

The 23-year-old is wary of a wounded Queensland side who will aim to bounce back after their disappointing loss against the Rebels in their season opener.

The Reds will also be without their new skipper Scott Higginbotham who was suspended for three matches by the judiciary for a dangerous tackle in their round one loss.

Banks, who made his Super Rugby debut for the Reds against the Brumbies in 2015, said his old side will bounce back.

“I always love playing Queensland because I did get my start there and there’s a bit of history there,” Banks said.

“When there is so much hype in the offseason over what they have tried to build and they have a season opener like that, they are going to bounce back as hard as they can. We have to weather the storm early and then look to play our own game.” 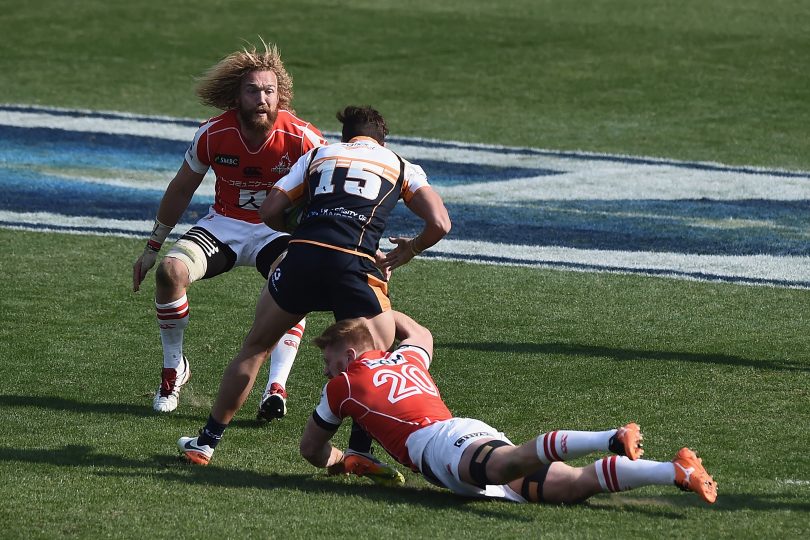 Tom Banks tackled by Edward Quirk and Willem Britz of the Sunwolves during the Super Rugby match between Sunwolves and Brumbies. Photo: Supplied by Brumbies.

Banks admitted there is work to be done on his side’s attack.

“It’s always hard, the first game of the season. You’re just trying to get your structures together but there were some good glimpses there and we had some really good passages of play,” Banks said.

“The structure we are trying to play will take a little bit of time but we are looking a lot better. You still have to go through them before you go around them and you don’t want silly offloads or things like that.”

Banks also praised captain Lealiifano’s calming influence over the team in their come from behind win over the Sunwolves over the weekend.

The Brumbies trailed the Sunwolves 19-8 after the first half an hour in Tokyo as the Canberra side struggled early.

“He’s such a calming influence, especially on the field,” Banks said of Lealiifano.

“He is so influential in what he says and he is really calm on the field.”

The Brumbies turned it around in the second half to secure a season-opening win, with Banks getting on the score sheet.

Brumbies head coach Dan McKellar has made two changes to the starting XV with Rory Arnold and Lachlan McCaffrey coming into the side.

Lock Arnold replaces his brother Richie in the second row with McCaffrey, who made a try-scoring appearance for the luckless Rob Valetini against the Sunwolves in Tokyo, beginning his first Brumbies Super Rugby match since 2014.

The Brumbies face the Reds at Suncorp Stadium in Brisbane on Friday evening with the match live on Fox Sports.

Matt Henry - 18 minutes ago
Allison Jay if she says that then u could only blame boring parenting. Canberra is a great place to bring up kids ans live. View
Allison Jay - 1 day ago
Kat Rothwell haha yes indeed View
Food & Wine 111

Jody Kisbee - 37 minutes ago
Sounds like a plan View
Jodie Roberts - 51 minutes ago
Julia McFarlane what are you two up to this weekend? This looks lovely View
Jo Smith - 4 hours ago
Kathryn Sequoia it sure does K View
Sport 5

Border_Libran - 4 hours ago
Hi A_Cog, I’ve just found your comment, if you still reside at Oaks Estate I would be interested in contacting you, I was p... View
Breaking 1

Capital Retro - 4 hours ago
How unlucky is this dude? I mean, it's hard to even spot a police car in Canberra let alone hit one. View
Property 15

Harley Quinn - 6 hours ago
Canberra has NEVER been a peaceful city. I was kidnapped in 1993. It's nice that some people still have that illusion though. View
Business 18

Bob Jones - 12 hours ago
Deb Wheare And Lynne Meredith... I've heard because of the more right someone who identifys as being an Aboriginal or Torres... View
Kev Martin - 22 hours ago
I find If you stop breaking the law, you don't get locked up View
Deb Wheare - 1 day ago
Jacob Torresan face palm View
Community 12

Pari Gilmour - 23 hours ago
I support a burnout pad. Zero interest myself but obviously these guys need a social space to do their thing. Happy to suppor... View
What's On 5

During the 'unprecedented' year we all experienced in Canberra during 2020, lots of new words and emotions entered my vocabulary....
Food & Wine 111

A little under a year ago, the ACT Government announced that e-scooters can be legally driven on shared paths and...
Sport 26

@The_RiotACT @The_RiotACT
Eleven years after he was first drafted into the AFL while still at Erindale College, Jason Tutt is returning home to Ainslie Football Club https://t.co/0D5tHBFya1 (24 minutes ago)

@The_RiotACT @The_RiotACT
This remarkable seafront complex for sale near Narooma is your chance to purchase a unique residence with optional tourism business opportunity https://t.co/Fze10GhLLY (1 hour ago)