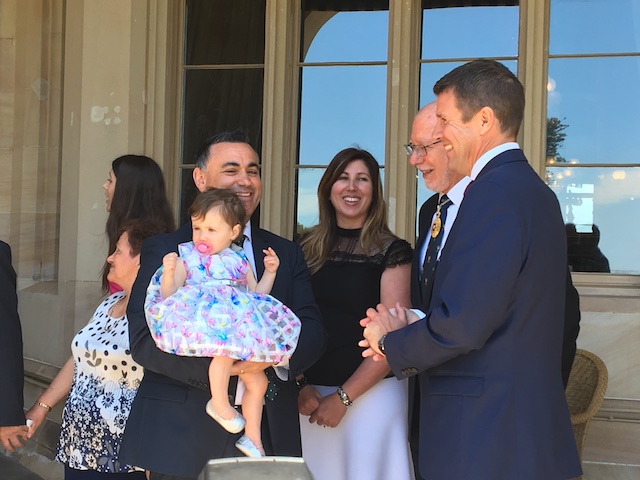 Anger over the Baird Government’s sudden ban on greyhound racing and forced council amalgamations has helped an Orange police prosecutor, who attributes his interest in fishing and shooting to his Italian heritage, to a stunning by-election win in NSW.

The outcome has projected another son of Italian immigrants, John Barilaro, the Queanbeyan-born Member for Monaro, into the National Party leader’s job after Troy Grant quit this week.
It has been a remarkable rise to Deputy Premier for the MP elected in 2011 to a marginal seat. But he faces a tough job re-building trust in the bush. Mr Barilaro and Nationals deputy leader Niall

Blair will be in Orange next week to find out what people in regional areas need and want.

He said the NSW Government needed to listen, engage and allow the community to vent their frustrations.

A policeman, father of five and hunter since he was a boy, Philip Donato led the boil over in the bush and is poised to take the NSW seat of Orange for the Fishers, Shooters and Farmers Party from the Nationals. Many pundits thought the Nationals holding a 21.7 per cent margin in Orange made them bullet proof in a seat they and their Country Party predecessors have held for almost 70 years.

Many pundits thought the Nationals holding a 21.7% margin in Orange made them bullet proof in a seat they and their Country Party predecessors have held for almost 70 years.
Instead the greyhounds ban acted like a lightning rod for rural people tired of being taken for granted. And groups like the Animal Justice Party campaigning to reform horse racing, and the treatment of animals across the agriculture sector, now face an uphill battle.
Rumblings of rural discontent had begun much earlier than Saturday’s poll, when other Nationals vowed to cross the floor on the greyhound ban. When Katrina Hodgkinson and Chris Gulaptis were dumped as parliamentary secretaries for carrying out their threat, people in the bush reached for their baseball bats.
Many of them poured into the Orange electorate to help Mr Donato, who stood after seeing a Facebook post saying the SFF Party was contesting the seat.
“It was just after the greyhound band and I was quite surprised the Government acted so quickly on the greyhound ban. I remember waking up to the Big Sports Breakfast on 2KY, the news was the greyhound industry was going to be banned come July 2017. I thought, geez , that’s a bit rough, where did that come from?’’ Mr Donato told The RiotACT.
Mr Donato said on polling day people from the greyhound industry, Queenslanders, Victorians, people from Save Our Councils in Sydney and Gundagai came to lend a hand.
“We had volunteer rural firefighters help. I was overwhelmed, we had about 150 volunteers on polling day, we had all bar two booths covered with volunteers, 43 booths in whole electorate.’’
The Shooters party had negotiated on preferences. “We knew for us to win the election we needed Labor’s preferences, and Labor likewise, knew they would require our preferences. We were confident we would out-poll Labor, which we did.’’