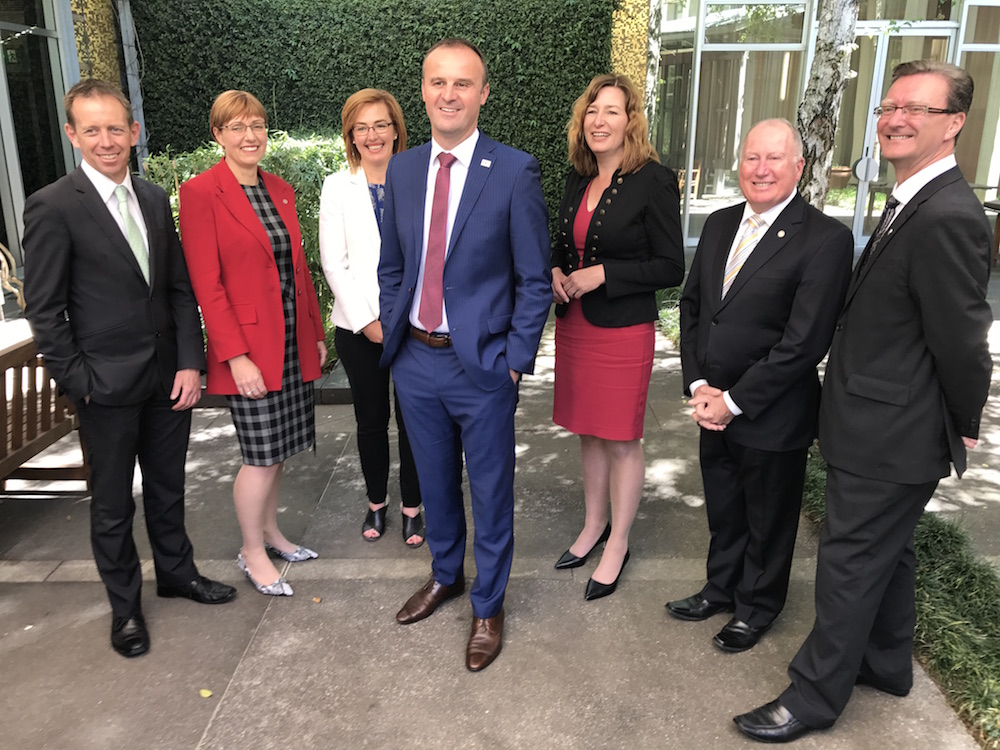 ACT Chief Minister Andrew Barr has appointed Gordon Ramsay, one of the two new Labor MLAs on his front bench, to the senior position of Attorney-General ahead of another candidate commentators had predicted would take the role, Greens Leader Shane Rattenbury.

Mr Barr said the team combined members with experience and new faces, but said the newer members brought significant commitment, talent, experience and expertise gained outside the Assembly to their new roles.

“There is continuity in certain areas, but also an opportunity for fresh eyes in some portfolios,” the Chief Minister said.

“I’ve created some new portfolios to focus the Government on priorities outlined in the Parliamentary Agreement [with the Greens], and also to deliver upon the election commitments the Labor Party took to this 2016 election.”

He said he had also sought to provide opportunities for new members to shine, and pointed out that while Mr Ramsay was new to the Assembly, he was not new to the issues relevant to his new portfolios.

“He has experience in the law, but he also has extensive community experience, and I don’t expect every minister to be an instant expert in the policy areas that they have responsibility for, but Gordon brings a significant depth of experience as a senior community member over decades to this role,” Mr Barr said.

“I have absolute confidence in his ability to be an outstanding Attorney-General. I think he will bring compassion and progressive values to that role and was a very clear choice.”

Mr Barr said wanted to particularly highlight Mr Rattenbury’s role as Mental Health Minister, and the overlap of responsibilities and outcomes the Government hopes to achieve through the Mental Health, Justice and and the Corrections portfolios.

“There’s a really important piece of work there for the Government,” he said.

As Deputy Chief Minister, Yvette Berry takes on the portfolios of Education and Early Childhood Development, Housing and Suburban Development, the Prevention of Domestic and Family Violence, Women and Sport and Recreation.

Mr Barr retains his previous responsibilities for Treasury, Tourism and Major Events and Economic Development but will have less portfolios overall.

The other senior Labor MLA in cabinet, Mick Gentleman, will be Manager of Government Business as well as serving in the portfolios of Police and Emergency Services, Environment and Heritage, Planning and Land Management and Urban Renewal.

Rachel Stephen-Smith, like Mr Ramsay a newcomer to the Assembly for Labor, will be Minister for Community Services and Social Inclusion, Minister for Disability, Children and Youth, Minister for Aboriginal and Torres Strait Islander Affairs, Minister for Multicultural Affairs and Minister for Workplace Safety and Industrial Relations.

All 25 new MLAs were sworn in during a ceremonial sitting of the Assembly earlier today. Labor’s pick for Speaker, Joy Burch, was elected to the role after a ballot as the Liberals nominated former Speaker Vicki Dunne. Ms Dunne was elected Deputy Speaker unopposed. Mr Barr was also officially elected Chief Minister after a ballot following a nomination from the Liberals for their leader, Alistair Coe.

See our Facebook Live coverage of this morning’s sitting here:

Bernard - 46 minutes ago
Problem ACT Government have with promotions and perceptions (possibly the realities) of conflicts of interest are nothing new... View
Property 7

keek - 1 hour ago
Awesome news. ACT Labor and the greens really looking out for working families with their housing policies, land rates rises... View
John Mungoven - 13 hours ago
Dream of a home (ie with backyard type) is rapidly disappearing in Canberra. Local Govt policy is for 75% of new residences t... View
Andrew Whiting - 14 hours ago
Yup that’s me priced out for awhile. View
News 11

Ben Fittler - 19 hours ago
Germaine Muller I know! Devastated he was always so nice View
News 13