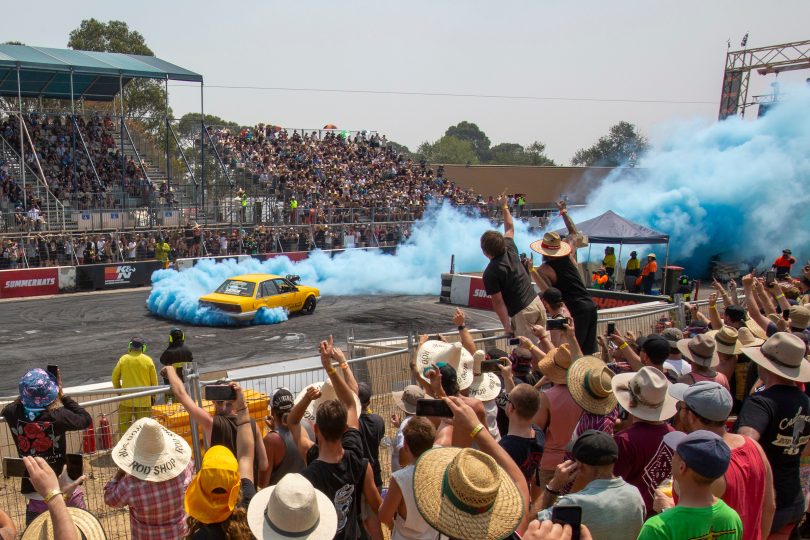 Chief Minister Andrew Barr told Summernats’ organisers on Friday [3 January] they should take the bushfire emergency situation into consideration and alter parts of the festival – especially the burnout events.

With the ACT under a total fire ban today, and temperatures above 40 degrees, Mr Barr said common sense should be employed.

“From a government perspective we will be imploring Summernats organisers to use some common sense and to have some situational awareness tomorrow,” he said on Friday.

“It would be my very strong preference that they look at the forecast and look at the circumstances surrounding the weather and the significance of tomorrow [Saturday, 4 January] in the context of the emergency situation and make the right decision around rescheduling components of their program.

“I know [co-owner] Andy Lopez is a mature responsible adult. He has the capacity to alter his program to meet the conditions and he should do so.

“It is what the community would expect and obviously we have the capacity to step in should conditions be extreme but I would hope that organisers would reach that conclusion themselves without needing the Government to bring in the big stick.”

Today, though, the burnouts competition, a highlight of the annual event, is going ahead as planned.

However, co-owner of Summernats Andy Lopez says the organisers have made sure that the event is safe for everyone, and that temperatures like this have happened before.

“We have consulted with various agencies in government, both fire and health all the way through, and we are comfortable that we are able to proceed,” he told Region Media.

“We have been holding Summernats on days just as hot, or hotter, over the last 33 years. It is summer, it is January, it is always really hot.

“We have a really professional health and safety plan, we have heaps of shade, water, and a really well-resourced first aid crew who are all here to help our patrons have fun and do so safely.”

Summernats did employ a significant presence of private firefighters at today’s burnout events to supervise the activities, and somewhat modified the program, Mr Barr said at a press conference this afternoon [Saturday, 4 January].

“I am pleased that they have responded, to a certain extent, to the issues and concerns regarding the safety of the burnouts,” he said.

“My call was for common sense to prevail and for level heads and an adult response from the organisers, and I think they have come some way in that regard.

“One of the issues for Summernats is their social license, and they have made an important gesture today by raising funds for the Red Cross Appeal, but there is certainly an element of our community that does not appreciate, in the current smokey environment, further smoke from burnouts.”

Having already cancelled tonight’s fireworks for safety reasons, Mr Lopez says Summernats is just trying to safely put on a good show for its patrons who look forward to the annual event, and that the festival might actually provide some respite for bushfire victims.

“The fact is, what we do here with our competition, we have the approval to do it. Our belief is that it does not overly contribute to the [smoke] situation, and we are a very well planned and safely run event that people look forward to,” he told Region Media.

“We are a small business just trying to run our show and deliver on our promises to our patrons.

“A lot of these people do come from fire-affected areas, and can have a couple of days of thinking about nothing else apart from what they love.”

ACT Policing has also warned all drivers that just because the car festival is in town, that does not mean irresponsible driving will be tolerated.

Following a collision at the burnouts competition on Thursday where two people sustained minor injuries and one of these people was transported to the hospital, ACT Policing Operational Commander for Summernats Station Sergeant Adrian Craft says people need to be extra careful in the low visibility.

“We remind drivers that there is never a place for speeding, anti-social behavior, or drug or drink driving and we’ll have police out targeting those doing the wrong thing,” Detective Station Sergeant Craft said.

“We know that everyone that is here for Summernats is here to have a good time. We ask that people do this responsibly and think about the consequences of their actions on not only themselves but the families around them,” he said.

One rule for some, Mr Barr, in the middle of a total fire ban.

It doesn’t really matter whether there were paid fire crews on hand or not.
Causing a naked flame outside during a total fire ban is criminally negligent. I’m sure there’s plenty of footage on social media right now showing flames blowing out the back of vehicles at this event.
If the Government is serious about this, Send ’em all a fine.
Putting the burnout event back one day wouldn’t have usset the whole of summernats. People could still participate in all the other things on offer on Saturday.
Would it have upset peoples schedule much?
I dunno, probably not as much as having your house burn down, or spending a week fighting fires in another state.

All I’m saying is it wouldn’t have killed anyone to move the burnouts back a day.

Side thought though, how many of the paid fire crew / marshalls are RFS members who could truly have been of use somewhere else that day?

Absolute idiots. I hope the government revokes their license for next year. With emergency services being as strapped as they are why add anything to the mix unnecessarily.

They have paid for private fire and safety crews. People using a national disaster to push their hatred for summernats are a disgrace.