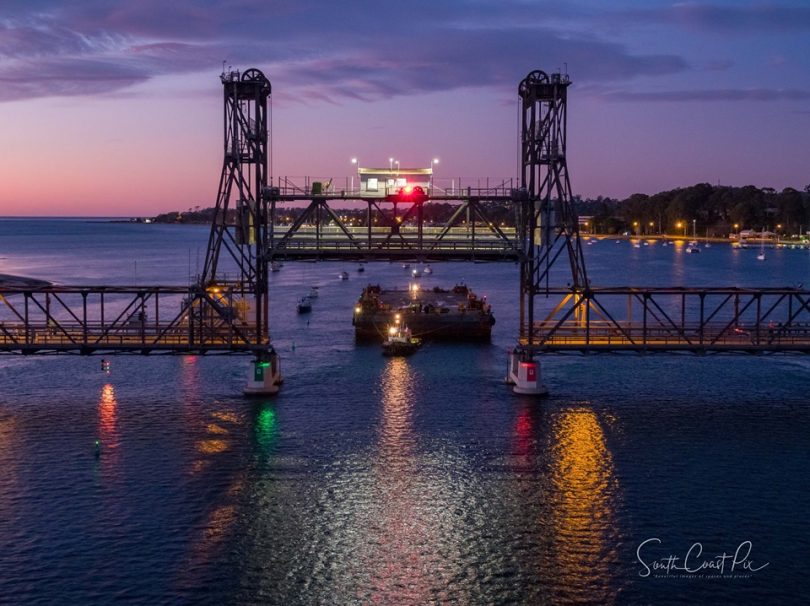 A barge half the size of a football field steamed into the Clyde River as the first light of Friday (July 12) burst over Batemans Bay. The arrival marks another milestone in the Batemans Bay Bridge replacement project.

“The barge, named AMS 1803, will be in the Clyde River for the duration of the project and will house a crane and other materials to build the new bridge piers,” a Roads and Maritime Services (RMS) spokesperson says.

The historic old bridge had to open in order for the barge to take up its position, an action that will live only in people’s memories once the new bridge is complete.

“The barge travelled down the coast over the last week from the Port of Yamba,” RMS explains.

“It was towed down the coast by a tug boat. Before its journey, it was removed from the water to be thoroughly cleaned and inspected to give a very high level of confidence that it would not be bringing biosecurity hazards that may affect the Batemans Bay oyster industry.

“Planning is underway to bring a second barge into Batemans Bay later this year to carry a 450 tonne crane which will be used for the assembly of the 168 concrete bridge segments, some of the widest of their kind in Australia.” 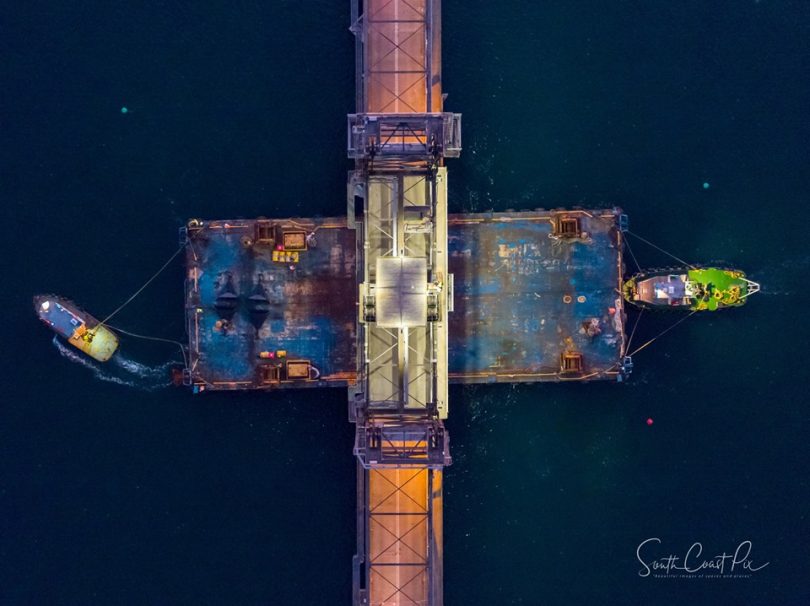 The arrival of the barge which comes in at 3,000 tonnes, 21 metres wide and 55 metres long, presents a challenge to traffic on the popular waterway. To maintain safety an exclusion zone around the works has been in place since early May.

“A navigational channel through the exclusion zone is in place at all times and taller vessels will continue to be able to use the lift span of the existing bridge,” RMS says.

“The exclusion zone is located immediately upstream and downstream of the existing bridge, with navigation markers that will flash at night.”

River users are asked to reduce speed to four knots to minimise wash. 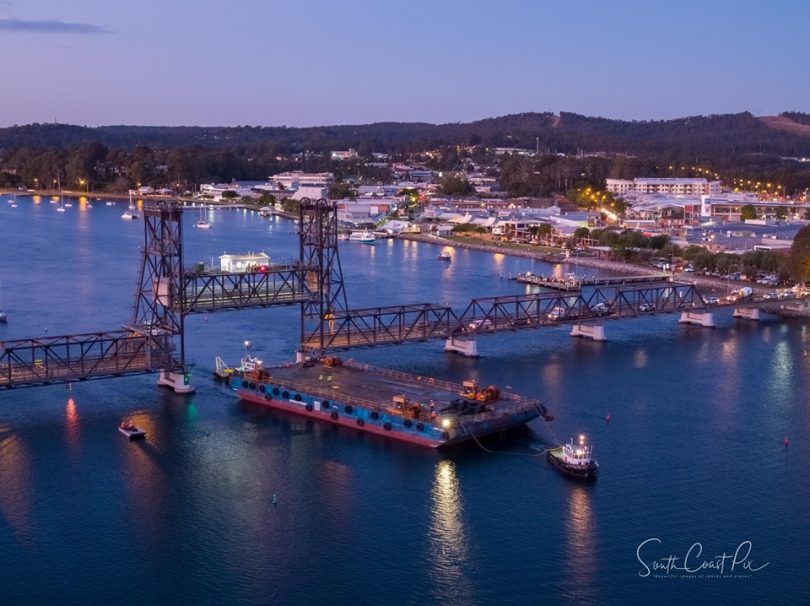 The $274 million project aims to build better connections in and around Batemans Bay for motorists, freight, river users, pedestrians and cyclists. Major works started earlier this year, pushing towards a deadline in early 2023, which includes the demolition of the existing bridge and completion of the foreshore areas. 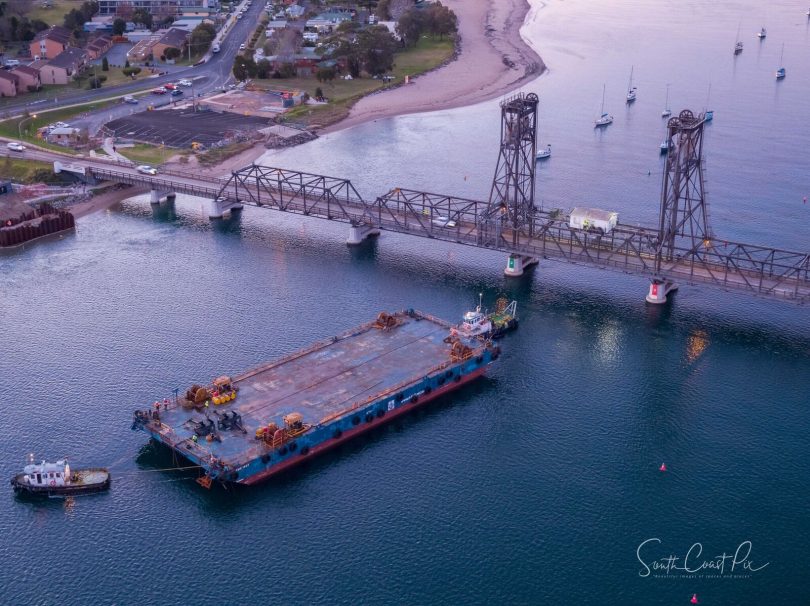 Minister for Transport and Roads and Member for Bega, Andrew Constance says, “There is a workforce of 133 people currently on the project, and this is expected to grow to 200 as progress on the new bridge is made.”

“Almost 45 per cent of the workforce is made up of local employees.” 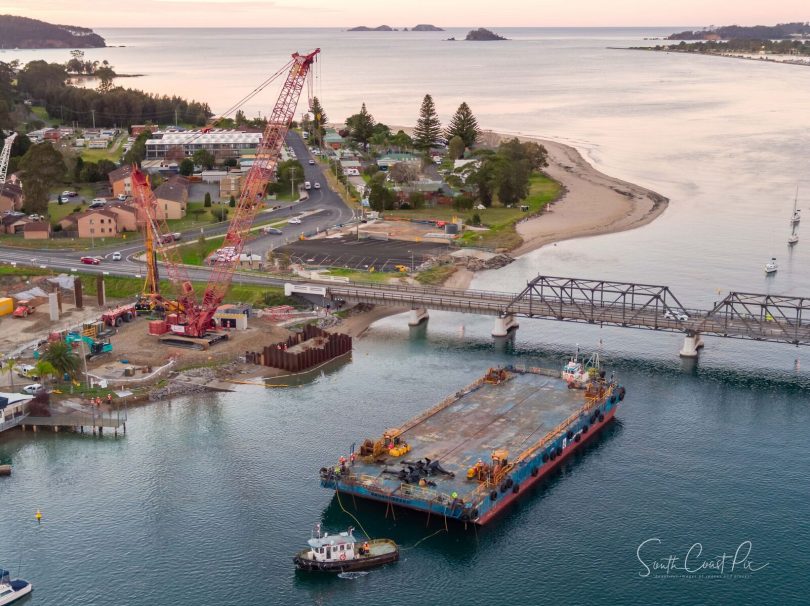 Thanks to Robert Jacobs from South Coast Pix who was up before there was light to capture these amazing images and share them so generously. To see more of Robert’s work head to the South Coast Pix Facebook page.

Simon Wheaton - 2 minutes ago
Reading reports from back then, he was even dodgier than our current politicians! View
Lifestyle 16

Jennifer Brodie - 5 minutes ago
Are they selling tulip bulbs this year ???? View
Suzanne Mansfield - 6 hours ago
Karina Curwain rats and damn! View
Dawn Glover-Schwalm - 6 hours ago
Til Bijou me too!! View
News 32