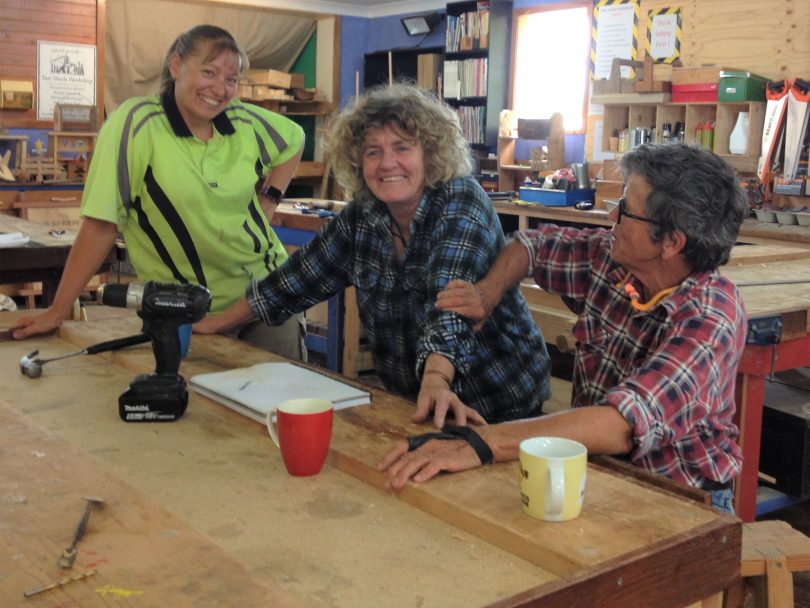 Following the success of her Two Sheds woodworking workshop for women and children in Bega, Jo Saccomani is expanding her business to Wanniassa in Canberra with hopes of also expanding the visibility of female tradespeople.

‘Women make up less than two per cent of tradespeople in Australia,” Jo says.”And so what we’re doing is teaching women woodwork to change the culture of what is and isn’t women’s work.”

Two Sheds’ kid’s classes make that change part of life right from the start, with girls and boys working side by side in a workshop, taught by women. 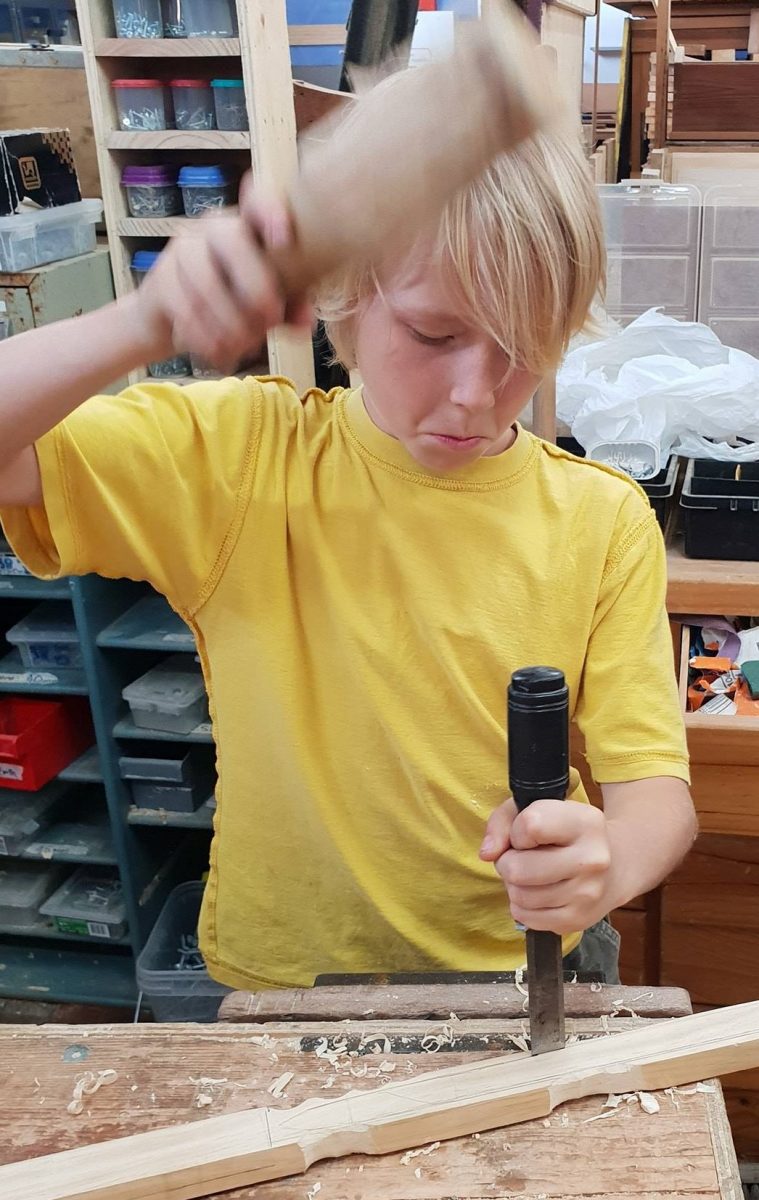 When children grow up seeing skilled women build and teach, there isn’t even a whiff of ‘girls can’t do that,’ says Jo. Photo: Two Sheds Facebook page.

“I want to make it so being in a trade is an ordinary job for a woman,” Jo continues. “So you don’t have to be exceptional or really well supported to do the job.”

Jo attended the University of Canberra and worked as a builder in Canberra for ten years, so although she will continue living in the Bega Valley, she has strong ties to the capital and has used her connections there to attract female tradespeople to teach classes at the Canberra workshops. 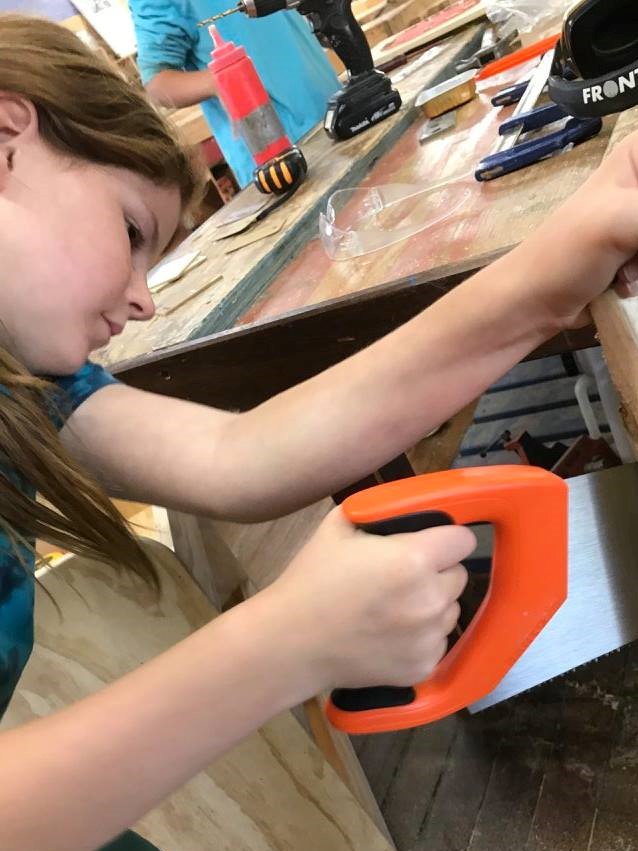 Woodworking is “hard work,” says Jo but once her students see their results, they keep coming back for more. Photo: Two Sheds Facebook page.

Jo has been running monthly workshops in Canberra since September 2018 but with the new premises secured, she plans to offer daily workshops for women and kids, including after school, weekend and after hours workshops to suit every schedule.

“Pretty much all women think they’re going to be bad at woodworking,” she muses, “but they’re really not.”

Laughing, Jo adds, “we don’t even do much, mostly just introduce them to clamps. Bam! lives changed.”

Getting a handle on power tools is a focus of the workshops too.

As well as teaching “the lost art of tinkering,” Jo and her fellow teachers in Bega, carpenter Vickers and cabinet maker Tess Walker aim to be a normalising presence in the woodworking scene and general community.

“The more people who see us here, hauling wood, using trailers, sitting on chairs we made ourselves, and the more women who are making and using their own furniture and building their own houses, the more that normalises it,” Jo says. 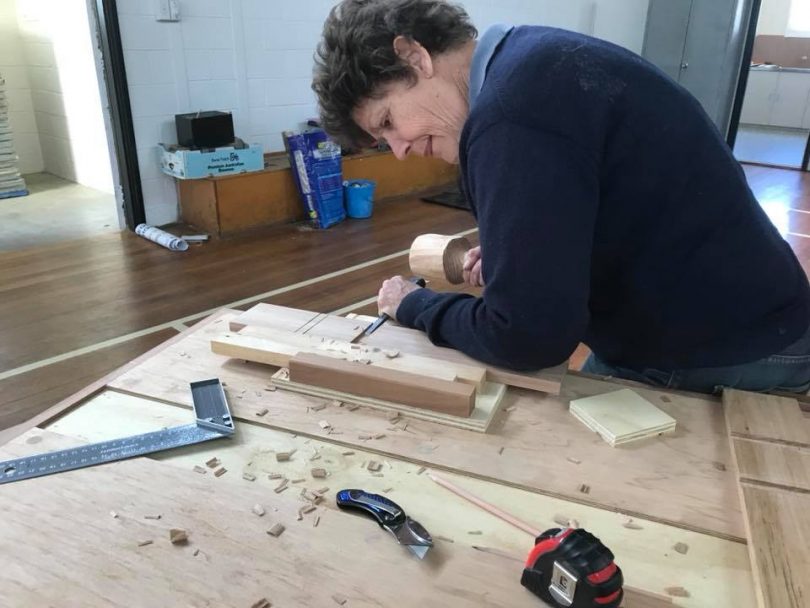 Growing up, Jo says it wasn’t so much about what her parents said she and her sister could do, but more that they never said there were things they couldn’t do.

Tess had a similar experience, growing up in rural NSW riding horses and motorbikes, “making our own fun.”

“Dad always said yes,” Tess recalls, “if I wanted to make something, he’d give me a bag of nails and a pile of wood and send me to the barn. There was no sitting around, we were always doing something.” 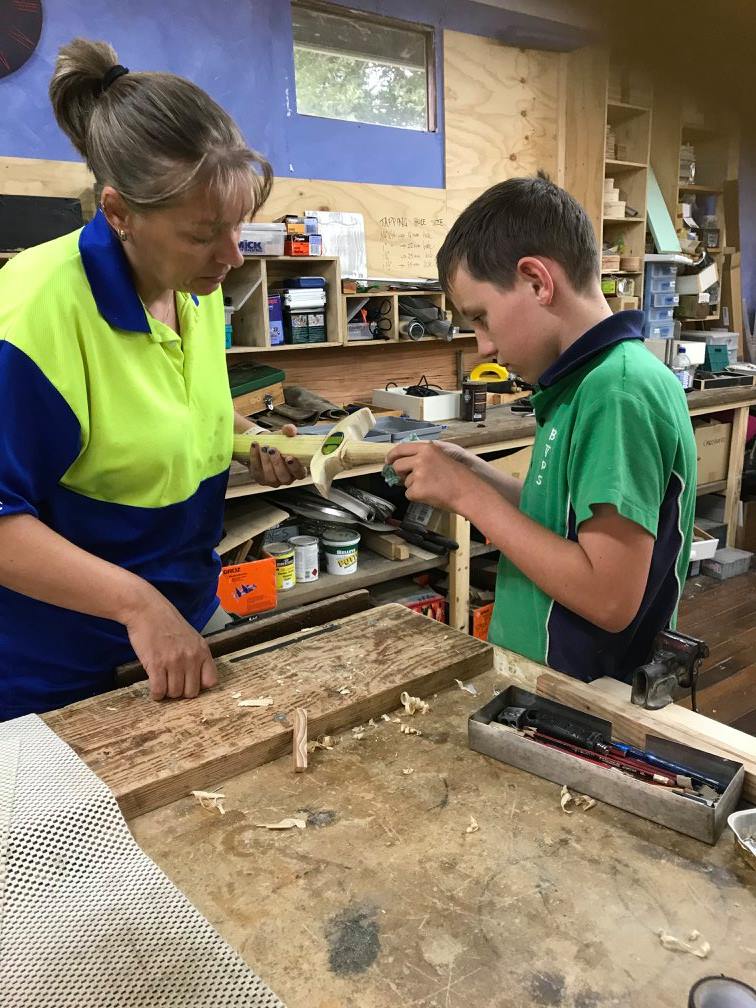 “Firstly, I started the business in two tiny sheds and secondly it’s a bit of a reference to the Monty Python sketch of the same name, about a guy who tells his friends he’s thinking about getting a new shed and is known as ‘two sheds’ forever afterward.”

Frequently asked when she’ll start holding workshops for men, Jo answers with a wry smile: “men have already got all the sheds, don’t they? They’ve got men’s sheds and most men have a shed in the backyard. I guess when women make up 50 per cent of the trades, then I’ll start offering men’s workshops.”

However, Jo is not unsympathetic to the plight of men as humans, “we’re all affected by living in an age where we don’t use our hands as much, we don’t make stuff and fix stuff as much anymore. It’s a disconnection from life.”

Two Sheds Workshop for women and children will begin in Canberra on 30 March.

To connect, book, and for more information about Two Sheds, check the website.

Bonus content, hear Jo’s pitch for change at the 2018 Festival of Open Minds:

SP Brogues - 2 minutes ago
All that landfill... View
Vickie Saunders - 12 hours ago
Not seeing a face makes one confused. Clarity pays off. View
Lorraine Marsh - 12 hours ago
Fed up seeing them all over canberra. One will do.... View
ACT Election 27

Julie Macklin - 2 hours ago
Colin Vivian, The bridge replacement was a suggestion from the Federal government, not local. Now it's not to be replaced, bu... View
Colin Vivian - 2 hours ago
Peter Mackay if they’re smart they could look at Trackless Trams at 1/5 the cost. No need for ridiculous bridge replacement... View
William Mudford - 2 hours ago
The Liberals announced the other day that they would fund their promises by encouraging people to “move back from Queanbeya... View
Property 14

Art, Not Apart calls for artists to workshop 2020 festival ideas