The ABC recently ran a Catalyst story on the fire tornado that came with the 2003 fires.

Our own ESA have kindly posted the youtube vid of the previously unknown phenomena:

On the afternoon of the 18th January, 2003, the fires that had been burning to the west of Canberra were influenced by elevated fire danger and enhanced atmospheric instability. These produced a series of blow-up fire events across the landscape, which in turn produced a set of pyro-cumulonimbus (pyroCb) fire clouds. These are still amongst the most extreme fire clouds ever recorded. They produced many of the phenomena associated with severe thunderstorms, including a severe tornado.

The mid-level winds that afternoon carried the storms cells to the east-southeast, towards Canberra’s urban edge.

While many people in their path were focused on staying alive, Tom Bates was sufficiently out of harm’s way to use his video camera to record events. What he captured is – globally – unique. He was standing just west of the car park at the very southern tip of Kambah Playing Fields, looking northwest to Mt Arawang. A prominent part of the footage is the football goal post of the southern playing field. 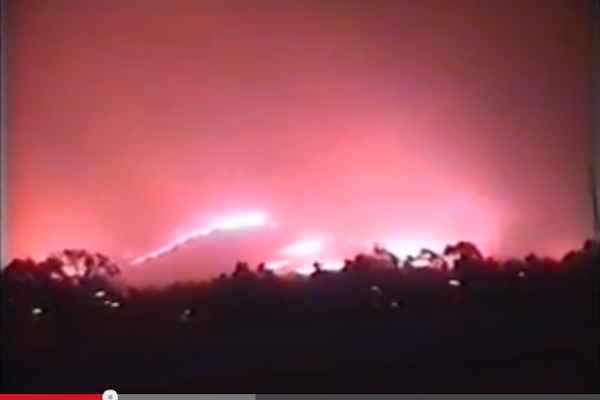 I’ll never forget that day. I watched the fire race up Mt Taylor, and couldn’t believe the speed of it. I drove to from Lyons to Rivett at the peak to take more hose to my friend’s house and the smoke had turned day into night. It was mayhem on Hindmarsh Drive, but of course, in Civic, people were sitting in cafes, shopping etc, unknowing of what was happening.

Stunning footage and such Aussie commentary from Tom.

That brings back terrifying memories….

Not half wrong there, whilst he was recording saying “some poor bastards house has gone up” I was pretty much standing outside one of those houses, defending a property in Chapman (which luckily survived 🙂 )

Funny enough, I didn’t actually feel any fear as I saw the fire coming down over that hill (which is probably a good thing)…

Any chance you have that backward? If not, what do you mean?

And yes, some memories. I have seen a few bushfires since “03, and each one only makes me understand more how insane that day was.

That brings back terrifying memories….