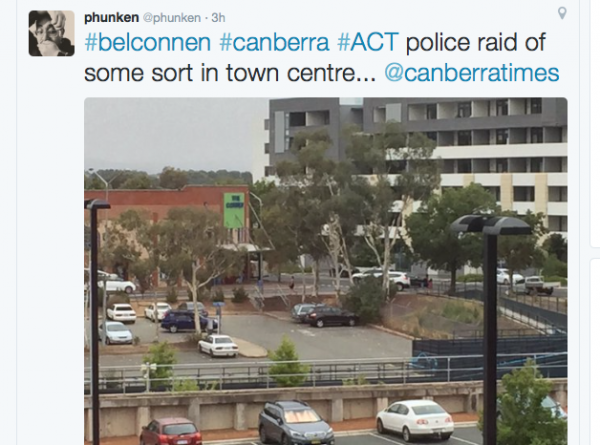 Police have dismissed social media reports of a siege involving a gunman in Belconnen Town Centre this morning, describing the incident as a routine police operation that was now resolved and assuring Canberrans they held no concerns for public safety.

A spokesperson for ACT Policing said the operation took place on Chandler Street in Belconnen between 10am and 11am this morning.

A RiotACT reader wrote to alert us to the police activity, asking, “What’s happening in Belconnen? Police, tactical police and streets closed???”

A series of tweets describing the incident this morning as a siege involving a gunman have since been deleted. RiotACT approached the holder of the account that published the allegations to find out what led them to do so but has not received a reply.

A witness to the incident told The Canberra Times that police took a man from inside an apartment block on Chandler Street away in a paddy wagon after attempting to negotiate with him via a loudspeaker.

I know someone who works near there and from their first hand report an agitated man came out of the apartments in question waving what looked like a handgun at people including some removalists and a young mother. This was after an acquaintance of the man starting walking on cars parked on Chandler St. Police were called by which time the armed man went back into the flats where it took police several hours to convince him to surrender peacefully.

Nicholas Spence - 9 hours ago
Yeah, he's the Chief Minister. So yeah I'd like to hear what he has to say on such a significant issue. Especially since his... View
Malcolmo Oz - 9 hours ago
Nicholas Spence Why? Do you expect him to step in and overrule ACT gaming regulatory approvals? View
Peter Marshall - 22 hours ago
That's not a good casino... View
Opinion 115

Gerda Lawrence - 20 hours ago
Fiona Tan hopeful they survive View
Anna Smith - 21 hours ago
That's it! I'm coming over there and saving all the platyes. View
Stephanie Moore - 21 hours ago
Ali Bear yes, I know & I’m so pleased about the measures they are taking to help protect this and other species through the... View
Lifestyle 4