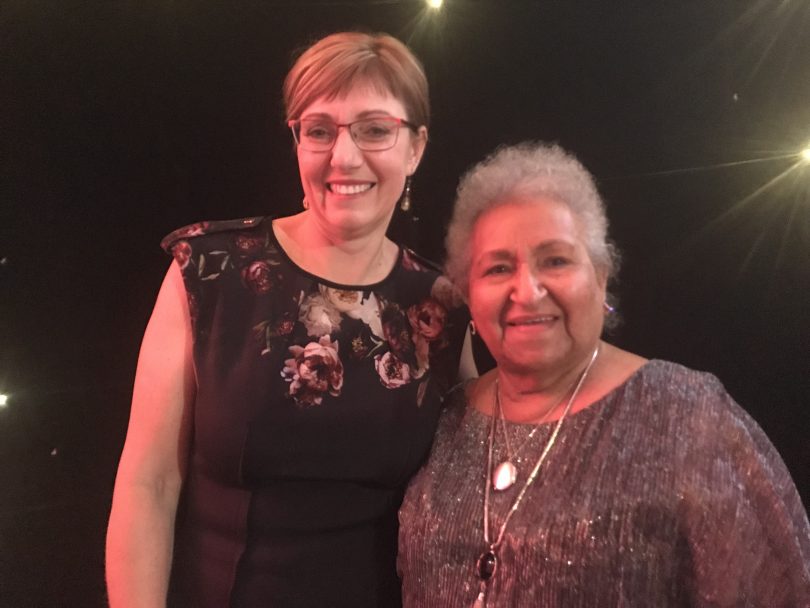 A beloved member of the Canberra Indigenous community has been named female elder of the year at the NAIDOC National Gala awards, held at the Convention Centre on Saturday night (6 July).

Aunty Thelma Weston, who was born in the Torres Strait, told Region Media that she was “very surprised”, but also deeply honoured by the accolade.

Aunty Thelma was also the ACT’s elder of the year in 2018 and received a national Dreamtime Award last year.

Recognition for elders holds particular significance given the honour they are accorded in Aboriginal culture. There were roars of applause and delight when her name was announced, accompanied by photos in her nursing uniform and perched on the back of a motorcycle in Asia, proving that age is nothing more than a number.

Born on Murray Island, her father was a pearl diver until war broke out and the threat of Japanese invasion was imminent.

“We left there when I was four years old. My dad sailed down to Cairns with his pearling boat to get us away from the Japanese and then he and his crew sailed to Brisbane, where I grew up,” she explains.

Thelma spoke no English at all when she arrived at school. Her elegant bearing and speech is the result, she says, of elocution lessons that also helped her to present a capable and competent image when she decided at 17 to become an army nurse.

Although she’s returned to Murray Island only briefly in the intervening years, culture remains a strong force in her life and she is an integral part of the ACT’s Torres Strait Islander community. One of her treasures is a journal containing her mother’s translations of Christian hymns into the Murray Island language, so that the family could maintain their connections with home.

After a long career as a health worker in Western Australia, she and her husband moved to Canberra before his death in 2011.

“People are just so nice here if you can help them, which I do with the needle exchange,” she says. “They are very respectful when they come in and I’ve got to know a lot of them now. A couple of the young girls who come in regularly, I make sure I pull them aside, have a little talk with them and see how they’re going.”

NAIDOC committee co-chair and Canberran John Paul Janke told a large crowd from around Australia that the NAIDOC Week awards provide an opportunity to showcase Indigenous excellence. “They celebrate our past, our present and our future and individuals’ unwavering determination and work to enrich our communities,” he said.

The lifetime achievement award went to actor David Gulpilil, in recognition of his transformative role in building awareness of Aboriginal culture.

jessie - 41 minutes ago
The question has to be asked why this path extension and bridge weren’t completed at least two years ago. View
News 10

Cary Elliot Johnson - 42 minutes ago
ACT Gov: "Here is a beanbag. We have a duty of care to your health so please be mindful of sitting upright whilst working fro... View
Shawn Mulgrue - 6 hours ago
Rosalind Turner my department has a specialised building and won’t be moving while I’m here. I just did the seating plan... View
Motoring 63

Jeff Smith - 44 minutes ago
Woody Brenden Don't think Public Transport is better than it used to be for the average Tuggeranong resident. View
Jeff Smith - 46 minutes ago
Tania Shaw Too true Tania. My bus use to take 12 minutes and two stops from Kambah straight to Woden, the bus changes in 2019... View
Howard Maclean - 2 hours ago
This article annoyed me so much I wrote a reply. https://thefoghorn.substack.com/p/the-most-affordable-form-of-personal... View
Lifestyle 74

Paul Komnacki - 49 minutes ago
AR version? Is that the one where you get a 50% chance of making it to your destination before the rust gets in? 😁 View
Food & Wine 27

bj_ACT - 1 hour ago
Yes agree there could be better connection opportunities for some users. Colleagues, Friends and family in Gilmore, Fadden, M... View
JC - 2 hours ago
Trams were replaced in lots of places in the middle of the last century. Problem of course is towards the end they realise wh... View
JC - 3 hours ago
That’s simply not true. Before light rail, in the peak there was a 200 bus usually a rigid, sometimes an artic every 5 minu... View
Opinion 2

Maya123 - 3 hours ago
Community sport has always survived. It only needs a place to play the game. Locals have long formed teams in games that inte... View
Capital Retro - 5 hours ago
Sport could survive without social media but it wouldn't survive without public funding. View
Courts & Crime 1

ChrisinTurner - 5 hours ago
Interestingly they don't seem to identify servicing the huge capital cost of Light Rail and its doubling of the subsidy per p... View
News 43

NAIDOC in the North Celebrates Culture in Gungahlin

@The_RiotACT @The_RiotACT
Air quality in the region will be affected by prescribed burns this week and Canberrans - especially those with respiratory conditions - are urged to take precautions https://t.co/EuqKAU1QF4 (3 hours ago)