French toast is probably one of the most decadent breakfast meals you can eat, and when I put the call out for Canberra’s best last week, I wasn’t quite prepared for the reality of starting my day with something so rich two mornings in a row. It’s rare that I can’t finish a meal, but the French toast at both places this week defeated me.

Stand By Me in Lyons came out on top with the most votes, closely followed by The Cupping Room in the City. The Cupping Room, however, has recently changed its menu and the apparently delicious French toast was one of the unfortunate dishes that got the chop. With The Cupping Room out of the race, Penny University in Kingston (coming in at third place) was going to have to step up.

Other notable mentions go to Fox and Bow in Farrer, My Cafe in Manuka and Neighbourhood Food in Gungahlin. 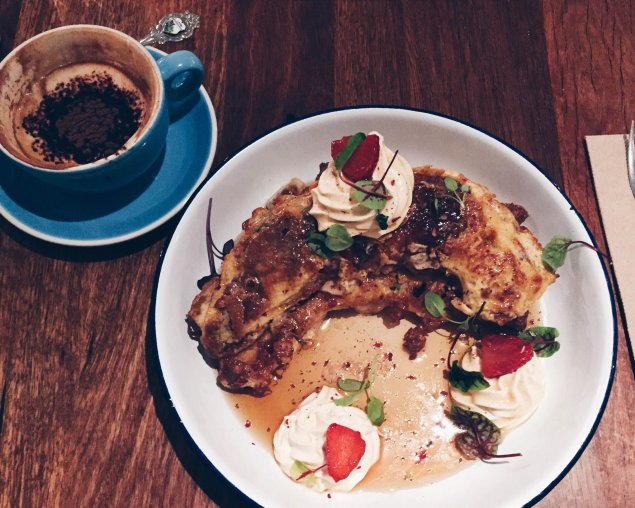 First up was Penny University on Kennedy Street in Kingston and its delicious croissant French toast. Yes, that’s right. As if it wasn’t rich enough already, Penny University decided to throw a croissant in the mix. It’s served with caramelised banana, cinnamon mascarpone, strawberries and a nice drowning of maple syrup. This is definitely not a breakfast for the faint-hearted – it’s very sweet, very rich and very filling. The mascarpone is the star of this dish for me, cutting right through all the other elements and providing some relief from all the sweetness. 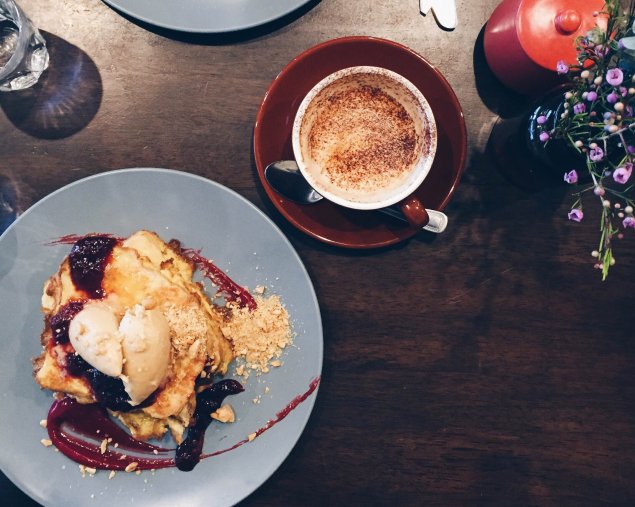 If you’re a fan of French toast, you can’t go wrong at either of these places. Penny University’s take on the fried eggy bread dish was delicious but just that little bit too sweet for me.

This week, Stand By Me takes the crown for Canberra’s best French toast – its creative and tasty take on French toast is second to none and I’ll definitely be heading back to check out what the next flavour will be.

the croissant usage in p.u.’s serving reminds me, tangentially, that we need a (probably later to get over the sweets overload) ‘best of canberra’ post on bread and butter pudding.

this is my go to dessert and, despite the dish’s name, i rarely use bread or butter; generally preferring good jam doughnuts or sometimes brioche (which is more or less bread) and – critically – duck eggs for the custard. but where in canberra does one chance upon the pinnacle of this classic?

YES. Bread and butter pudding must be (sadly) out of vogue at the moment. It’s been a long time since I’ve seen it on a dessert menu, but I’m all for a revival, especially if it involves jam doughnuts and duck egg custard.

the croissant usage in p.u.’s serving reminds me, tangentially, that we need a (probably later to get over the sweets overload) ‘best of canberra’ post on bread and butter pudding.

this is my go to dessert and, despite the dish’s name, i rarely use bread or butter; generally preferring good jam doughnuts or sometimes brioche (which is more or less bread) and – critically – duck eggs for the custard. but where in canberra does one chance upon the pinnacle of this classic?

Matthew Soall - 1 hour ago
Maybe ANU should be more focused on teaching students then running the place like a business. View
Capital Retro - 2 hours ago
The alarm bells are ringing now: https://www.abc.net.au/news/2021-04-23/anu-unveils-162-million-budget-deficit-due-to-covid-1... View
David Hennessy - 3 hours ago
Can’t imagine this ending other than positive View
Opinion 63

Peter Brierley - 1 hour ago
If I have to follow ALL the rules to drive my car (on the road) then why are these SAME rules not applied to ALL other road u... View
nerdfrenzy - 2 hours ago
I use a scooter to commute to and from work everyday. I'm always aware of people sharing the bike paths that I use. I do find... View
Jaeme Ogilvie - 2 hours ago
Escooter owners are not a problem as rule, I think its super important they are not grouped in here. Unfortunately there seem... View
News 5

saphael7 - 2 hours ago
Does this mean that domestic violence is going to be brought to the park frequented by small children? View
Community 1

Esmeralda - 2 hours ago
You're asking the wrong questions. The idea that you have to take from the poor to give to the poor is outdated and just wron... View
Food & Wine 49

Naoko Lamb - 4 hours ago
Very tasty soup, noodle and chashu. The service was quick and friendly and the atmosphere of the shop was vibrant and welcomi... View
News 4

Brisal - 4 hours ago
Then you stop and fix it. It isn't difficult. View
News 15

Neville Mercer - 4 hours ago
Wasnt the Center cinema part of the Academy Twin Cinema group at Paddington? View
Shayne Borger - 14 hours ago
Jorge Gatica na just someone who doesnt appreciate architecture or heritage....probably a developer who like the council want... View
Lifestyle 28

Darron Marks - 6 hours ago
Yeah we are still waiting for the cinema in Gungahlin as well. Covid is the reason supposedly hasn't stopped construction on... View
News 26

chewy14 - 15 hours ago
Capital Retro, Except all evidence at present is to the contrary. The only large scale batteries connected to the grid are ma... View
Opinion 8

Brian Evans - 16 hours ago
I live in an Enrico house and it is, day to day a wonderful experience. View
show more show less
*Results are based on activity within last 7 days

@The_RiotACT @The_RiotACT
The final two stages of the transformational Founders Lane precinct opposite the Canberra Centre have topped out and are on the way to completion this year https://t.co/zQOMWRQ0q1 (12 minutes ago)

@The_RiotACT @The_RiotACT
The Gang Gang Café may be tucked away at #Downer shops, but its musician owners are making a splash https://t.co/RRXY5ACYgx (1 hour ago)

@The_RiotACT @The_RiotACT
Can you help police identify this man? He was taken to hospital by ambulance from the Gungahlin Town Centre on 30 March 2021 and says his name is 'Roger' https://t.co/eaRqBkQco8 (2 hours ago)