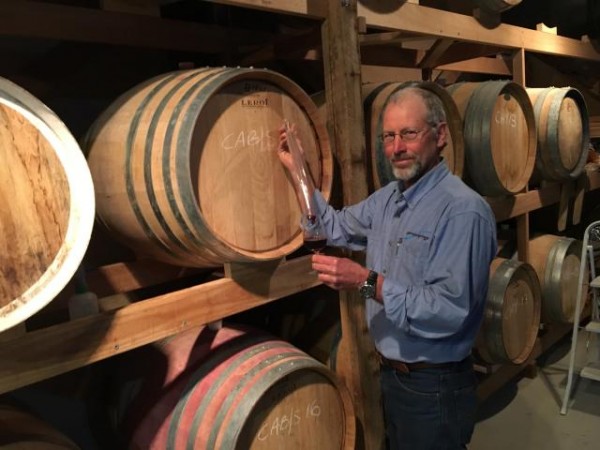 Cool climate vigneron Danny Hansen knows the enemy from Antarctica is overdue. The black frost comes every 7-10 years and is devastating in spring.

“We had one in 2006, a mass of cold air comes up, typically from Antarctica, so it is super dry, super cold,” Mr Hansen said.

Moving up the Great Dividing Range, the black frost wiped out vineyards along the way before arriving at Yarralaw Springs, a boutique winery Mr Hansen and his wife Vivien Fletcher established near Windellama, north east of Canberra.

“Our vines got killed above the ground,” Mr Hansen said.

“It just blows the bark off them, it doesn’t only kill the shoots, it kills the trunk as well.”

The couple counter ordinary spring frosts with an alarm-linked sprinkler system that coats new buds in ice which protects them at 0 degrees until they thaw in the morning.
Black frost is more formidable.

“Typically they are in the drought years, when you have no water in your dams to fight the frost, the air is going to be so dry and temperature so cold that it is not going to help anyway, all you will do is minimise the damage,” Mr Hansen said.

Across rural NSW sheep numbers have receded and grazing properties have been subdivided into smaller lots for tree-changers, including a handful who formed the Merino Country Vigneron Association, centred on Goulburn.

Harsh conditions and a wine glut finished most of them, but a few, like Mr Hansen, have prevailed. In doing so, he also changed the NSW Liquor Act legislation.

At markets around Goulburn he discovered the legislation required a minimum of 10 farmers or primary producers to be selling their produce at the event for him to legally able to sell wine there.

Few if any rural markets complied, the majority of stalls being cheap clothing, jewellery and candles. The only markets that complied were in capital cities. So he lobbied the government, wrote submissions and got the law changed.

“I can even go to Windellama which has only 15 stallholders,” Mr Hansen said.

“I’ll be the only producer, and now it is legal. All I want to do is sell locally.”

Mr Hansen, a chemical engineer, and Ms Fletcher, a teacher, left Wollongong in the late 1990s to built a strawbale wine cellar with a timber-lined bed and breakfast vine loft above it, with a balcony overlooking tall yellow box trees.

The B&B complements the small winery, and repeat customers, mostly from Sydney, help profitability, quite a feat for a four-tonne wine grower.

“Canberra people come up here in winter, I don’t know why they don’t go down the coast, a lot of them just want to use the camp fire,” Mr Hansen said.

“It is a quick run through Bungendore and Tarago.”

Viticulture tasks are broken down and logged on Mr Hansen’s computer with an engineer’s eye for detail. He says with satisfaction that last November he and Ms Fletcher squashed in their hands 13,901 grapevine moth caterpillars rather than using pesticides.