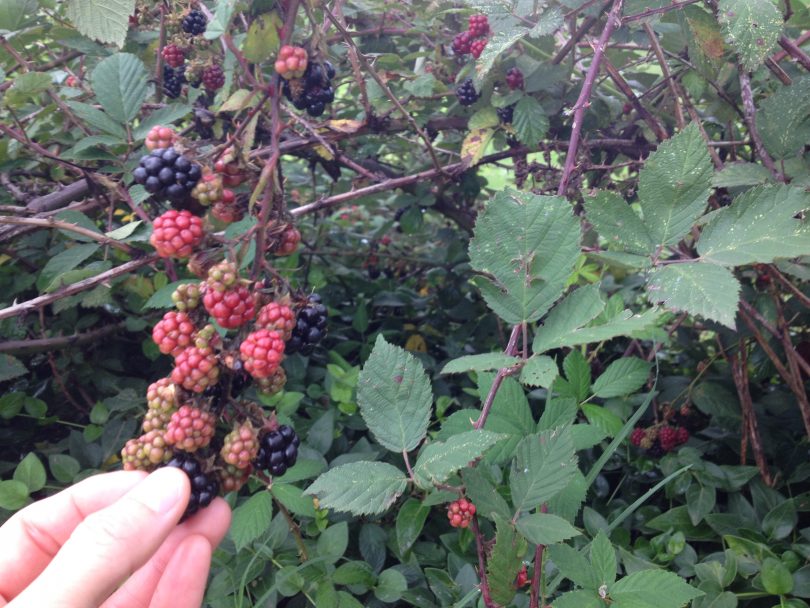 Lovers of blackberries will quickly learn how to wriggle a hand between thorns to get to the biggest, blackest fruit. Photos: Elka Wood.

Blackberries are ripening now and if you’ve been tempted by this unfortunate English transport (it is said to have arrived on our shores in the early 1830’s), you’re not alone.

Birds, foxes and other animals eat the fruit and spread this notoriously difficult weed through their excrement, making it a common site along country roadways.

But what about us humans? Does gathering the fruit contribute to the spread of the weed?

Only if we’re not careful, says Far South Coast Landcare Coordinator, Chris Post, who “absolutely” eats blackberries, provided they come from a controlled source, such as a backyard bush – and as long as he can be sure the plants haven’t been treated with herbicide.

“I would be wary of picking in public places,” Post says. 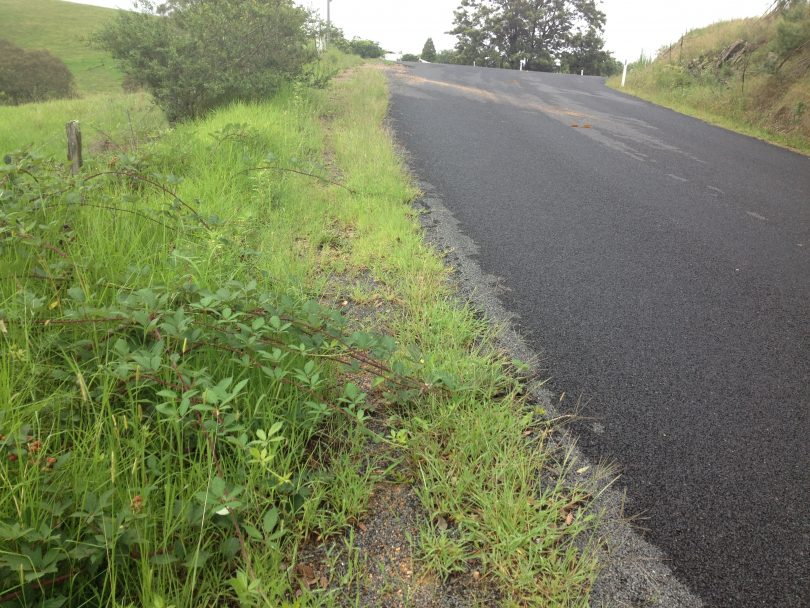 Blackberries often grow on roadways, but it is best not to pick them, as council or landowners may have treated the areas along roads with herbicide.

But picking from managed blackberry bushes can be a satisfying and productive exercise in gathering food locally.

“I’ve got heaps of blackberries on my property,” Schneider says. “I pick buckets full. I haven’t introduced blackberries to the local cafes I deliver to yet, but I’m sure there is a market for it.” 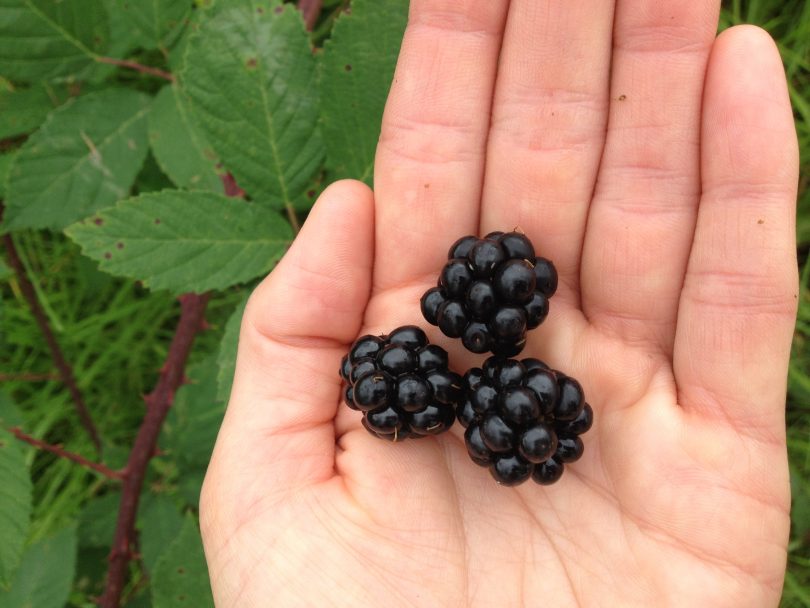 Blackberries are ripe when they are deep black and detach easily from their stems.

But don’t let your enjoyment of the ripe fruit hinder plans to control the plant on your property – Post says that, like Lantana, blackberries can create an impenetrable thorny “wall to wall” forest which property owners often feel overwhelmed by.

“Bega Valley Shire Council has successfully used a bobcat with a mulching attachment to ‘grid’ areas of Lantana and blackberries,” Post says, “which leaves the area accessible from all sides so we can get in and treat it with herbicide.”

Understanding the lifecycle and biology of any pest you are trying to control is key to success, says Post and in the case of blackberries, slashing and use of grazing animals will keep the problem down but only root removal or poisoning will kill the plant.

“Blackberries have a unique secondary root system, making them a really difficult plant to manage,” Post explains. “When the plant is under stress, such as when it’s been sprayed, the second root system shuts down so the plant looks dead but in the second year, you’ll get vigorous growth from that system.” 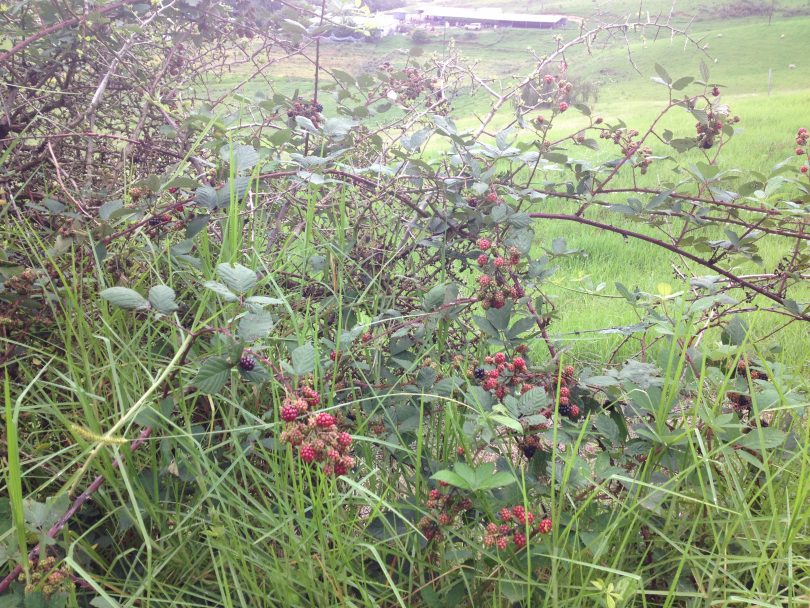 Because of this unique root system, a second annual spraying is necessary but it will be worth your time to wait until the plant is in full, vigorous growth before spraying, Post advises.

“The best time to treat with herbicide is when the sap is flowing and you’ve got lots of leaf surface,” Post says. “When the plant is flowering is a good time, or even up until April, after the plants have fruited. And don’t waste time or money on Round -Up, it won’t kill blackberries.”

Shortly after our first contact, Schneider posted on Instagram a picture of her buckets of blackberries. Her feeling about the market was spot on; she immediately received her first orders from some prominent South Coast restaurants for her foraged fruit. 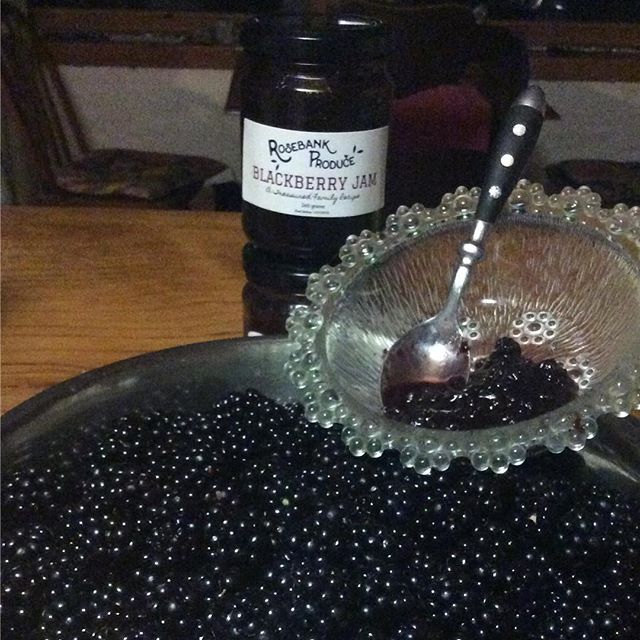 Perhaps a widespread awareness of the blackberry as a local food source will make us more proactive in managing the plant as a priority weed as well.

Please seek advice from your local council and Landcare group to make a plan to manage areas of blackberries or any weed on your property.

I think I recognise the location of the picture with the road on it – is this the top of the road on the other side of Swamp Creek just as it goes on a long slow left turn with a lovely huge blackberry patch right on the corner ?

I thought the council has sprayed and diseased the weeds down at the river but not up on the cocky’s land so I’ve been eating the ones up off the road a bit (i.e. nowhere near the verge). I do my part and hack it down with secateurs to keep the growth at bay but have absolutely no idea now if we are eating poisoned ones or not.

I do love blackberries, yes I do know they are a weed, and I felt guilty everytime i sprayed them on the farm.

Grow a seedless one at home. It does not sucker and big crops.

Chester thornless is what we have at home, it’s great!

Megan Hogan we love blackberries, I'll have to try one!

I recently picked and bottled blackberries to add to the years food storage. Easy to do…at least the bottling part :)…the picking was a more thorny issue.

Stephen Saunders - 2 hours ago
Thanks, I wasn't aware of this. Those who care about the Eurobodalla bush should log in to the disgraceful "Dalmeny Land Rele... View
News 158

Cary Elliot Johnson - 3 hours ago
I'm confused as to why the grass cutters are now only doing a half R'sd job and leaving kurbsides and big chunks around obsta... View
Rien Wiersma - 7 hours ago
Troy Dare yes, you’re right, I was just being naughty,... View
Kiri Robbie - 10 hours ago
Chris Montgomery we understand they need to plan, that’s a given. What we don’t understand is why they can’t plan! weat... View
News 6

rocca66 - 4 hours ago
I was staggered to think there could be 30,000 public service compensation claims. View
News 11

michael quirk - 5 hours ago
Yes,but it is by no means certain that light rail stimulates urban redevelopment more than BRT. Much depends on design of the... View
michael quirk - 9 hours ago
If the light rail extension to Woden is such a great project, the government should have no issues with providing justificati... View
gooterz - 15 hours ago
The cost of all the road works is actually buggering up the network for cars which is 95% of the road users. Saying its a gre... View
News 2

bj_ACT - 6 hours ago
Removing over 700 bus stops across the city and making women have to walk much further to their bus stop is one obvious issue... View
News 15

jwinston - 6 hours ago
Glad you asked JD. Allegedly Aboriginal and Torres Strait Islander people are incarcerated at higher rates than others. The i... View
Spiral - 17 hours ago
And a lot of these “Deaths in Custody” are not really deaths in custody. They are deaths because the offender is not in c... View
Public Sector 47

Jimmy J LaRue - 7 hours ago
There used to be a technical stream in the Commonwealth. Like there are pay grades for Legal and some other specialty streams... View
JS9 - 7 hours ago
Outsourcing makes genuine sense when it is specialist skills that are not reasonable to maintain within a public service. Whe... View
Jacqui Brown - 7 hours ago
Brian Tait after the last 8yrs I am sure that APS personnel and ultimately the public will be pleased that the former APS mod... View
News 58

JS9 - 7 hours ago
All this highlights again is a) How ridiculously stupid the retail electricity approach in Australia is in general (basically... View
JS9 - 7 hours ago
Shame you don't really understand the electricity network at all then, because you'd quickly understand that what the custome... View
kenbehrens - 20 hours ago
Pretty weird to assign tariffs around whether the house faces north, its size and whether the person is on welfare or not. Th... View
Community 3

Acton - 17 hours ago
"Mr Barr ... said it was more important to be calm for now. " Yes, particularl;y State premiers and their Chief Medical Nanni... View
Community 5

Norm Cheeseman - 20 hours ago
My great grandfather Noah Cheeseman was the first owner, the pub was built by his father in law Jeremiah Barrett View
show more show less
*Results are based on activity within last 7 days

Does your puppy or rescue dog need help settling into their new life with your family? Has a recent injury...
Public Sector 30

@the_riotact @The_RiotACT
The spotlight is fixed on young Canberra #entrepreneur Justin Wong from the Aero Group ahead of the Accountants Daily 30 Under 30 Awards to be announced on 3 December https://t.co/yylG31UDNF (28 minutes ago)

@the_riotact @The_RiotACT
RT @Breaking_247: #Police are looking for the driver of a vehicle that hit a 10-year-old girl on her way to #school in Macgregor this morni… (1 hour ago)