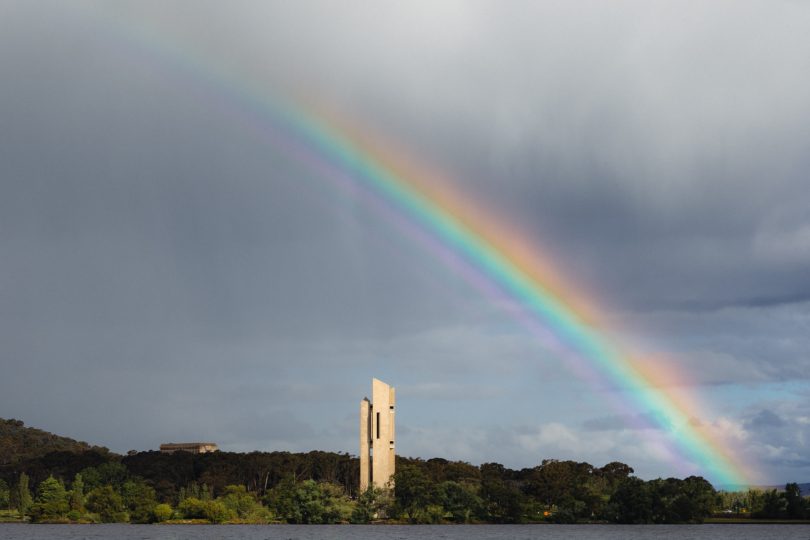 BOM declares La Niña is peaking, but it’s not all sunshine and rainbows ahead. Photo: Michelle Kroll.

It’s been a wetter but cooler-than-usual summer in the capital region this year as the La Niña weather pattern has led to both increased rainfall and lower daily temperatures. However, it may soon be coming to an end.

Australian Bureau of Meteorology climate models suggest that the current La Niña period is near or at its peak. A return to a neutral El Niño-Southern Oscillation is expected by early autumn.

While Australia is surrounded in nearly every direction by warmer-than-usual sea-surface waters and patterns in the atmosphere remain typical of La Niña, cooler sub-surface waters are beginning to warm. Also, the Southern Oscillation has reduced in magnitude in recent weeks.

Vice-Chair for the Intergovernmental Panel on Climate Change and Director of the Institute for Climate, Energy and Disaster Solutions at the ANU, Professor Mark Howden, was less convinced by the idea of a “single peak” of La Niña. He also cautioned that peaking does not guarantee a reduction in rainfall as the summer comes to a close.

“There are several influences occurring which are emphasising the additional rainfall that tends to happen in La Niñas, and that’s because we’ve got extremely warm water almost entirely around Australia,” said Professor Howden.

“Warm water basically results in increased evaporation and increased moisture in the atmosphere, and when that comes across the continent as it is currently doing, we get increased rainfall.

“That warm water isn’t going to go away in a hurry, so we are likely to see continuing wet conditions and potentially cyclonic conditions through the next three or so months,” he said.

While both El Niños and La Niñas tend to dissipate by the end of summer or in early autumn, the following pattern, whether it be an El Niño, La Niña or otherwise, should begin to take shape in the May/June period.

As La Niña has emerged in two consecutive summers, this year being the more significant of the two, three years in a row is considered unlikely. However, it’s not impossible.

When this pattern eventually does break down, Professor Howden expects to see the resumption of scorching conditions across the country.

According to BOM statistics, January in Canberra has seen average daily maximum temperatures of 27 degrees and total rainfall of 81.8 mm.

Forecasting that “it’s not all sunshine and rainbows ahead” could be a bad omen for our Chief Minister.