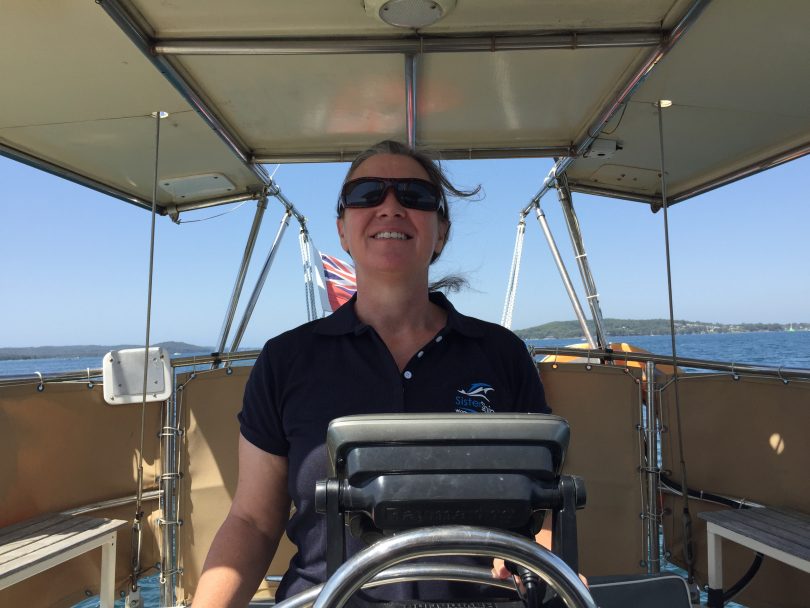 Jackie Parry and her partner Noel have sailed around the world one-and-a-half times. Photo: Supplied.

Jackie Parry is originally from the UK. Disillusioned with life she ran away to Australia and met and married Noel. They decided to buy a boat and set sail. It was Noel’s idea to go sailing and somehow he just knew Jackie would fit right in.

Mariah II took Jackie and Noel around the world. Pyewacket II, their second boat, purchased in San Francisco, took them across the Pacific Ocean for a second time on a more southerly route.

Having settled in Brogo, north of Bega in recent years, Jackie and her team are keen to share their knowledge, passion and first-hand experience via SisterShip Training, SisterShip Magazine, and SisterShip Press.

She invites you to share the journey with her. May the winds forever be at your back, Jackie! 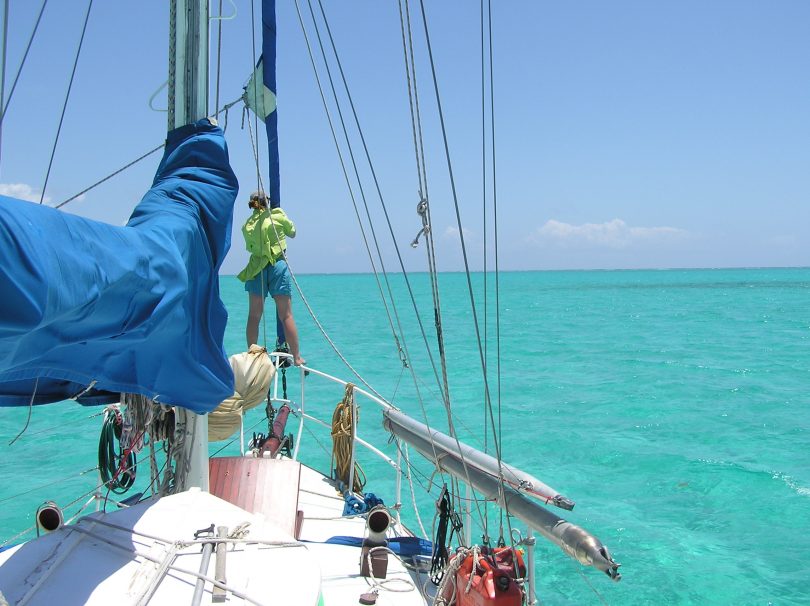 Jackie looking for reefs, coming onto the Bahamas.

I am not sure if you’ve heard of Lisa Blair. In the circles of sailing, record-breaking, inspiration and climate change, she is well known.

As a sailor myself, I’ve taken a keen interest in Lisa, followed her amazing accomplishments and met her a few times along the way. She’s fun, full of life and lives on the edge – and now she’s taking me with her to a similar precipice!

Those tummy butterflies of mine are working overtime and provide the perfect excuse to jump up and down because Lisa, her boat Climate Action Now, and myself (with butterflies) are heading into the Southern Ocean!

The 2019 Melbourne to Hobart Yacht Race starts on 27 December off Portsea Pier and takes the fleet down the rugged west coast of Tasmania and to Hobart. The annual 440 nautical mile race is open to fully crewed monohulls, with divisions for Four + Autohelm, double-handed and multihulls. 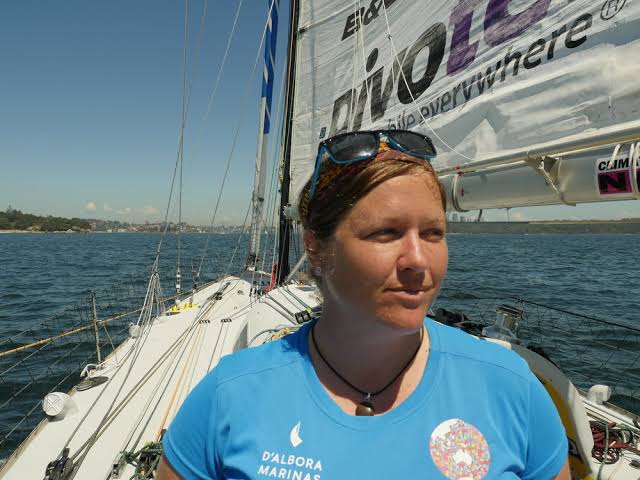 Lisa Blair, Jackie’s co-captain on her next adventure.

That all sounds very nice doesn’t it? But as you may have heard the Southern Ocean is fickle, tough and often serves up 10-metre waves. Yes, you read that right!

But my motto is if it excites you and scares you, you should be doing it. And I am a sucker for a good challenge, despite those butterflies reminding me that it’s been a few years since I did an ocean voyage!

Lisa’s thirst for sailing and adventure was aroused when she crewed in the 2011/2012 Clipper Round the World Race. The Sunshine Coast sailor, who has called Sydney home since 2014, has since completed the ITL Solo Tasman Challenge from New Zealand to Australia.

I couldn’t be in better hands! But wait, there’s more … Among other achievements, Lisa took her environmental message aboard Climate Action Now to the 2015 Rolex Sydney Hobart Yacht Race. 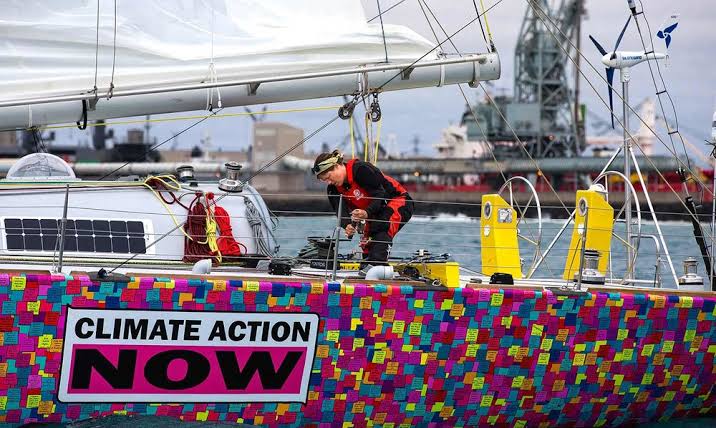 Lisa on board Climate Action Now.

Next was her aim to become the first woman to circumnavigate Antarctica solo, non-stop and unassisted. Her craft was dismasted in storm conditions. Undaunted, she stopped, repaired and finished two months later, making her the only woman, and solo woman, to sail around Antarctica.

Lisa did the 2017 Sydney-Hobart with an all-female crew and in 2018, refitted her Hick 50. She sailed solo around Australia, Sydney to Sydney, and into the record books setting a world record for the fastest solo voyage on a monohull, taking 58 days.

Lisa is a high-profile yachtswoman and adventurer on a mission to break records and leave her mark on the world, and this race is no different. We will be the first double-handed women crew in the 47-year history of the race!

A lee shore, potentially big seas, reefs, a new boat (to me), short-handed, dark nights and funnelling winds will be a challenge. But that’s not my focus. I have the deepest respect for the ocean, weather, and whatever Mother Nature decides to throw at us, but it is an honour to be asked to team up with Lisa. And, as co-skipper, my focus is to give it all I have. 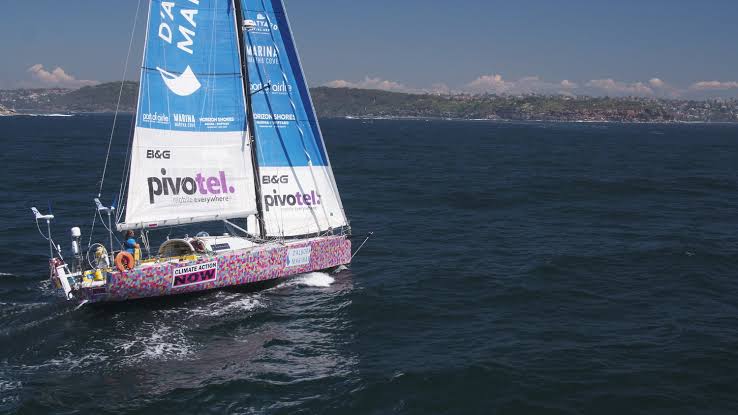 Having sailed around the world one-and-a-half times, and ventured from the beaten track of circumnavigators to places such as Easter Island and Pitcairn, I’ve seen my share of angry seas. So it’s okay that my butterflies are somersaulting with extra vigour, it’s healthy to respect things that you cannot control. It keeps you alive, aware, ready.

And I am ready, fitness training, lengthy tactic discussions, a few pre-race trial sails and wonderful support has me marching up toward this challenge with relish.

“We can do it because of d’Alboras, which was a sponsor before I went to Antarctica. We’re going to try our hardest, push the boat and have fun with it while delivering the ‘climate action’ message,” Lisa says.

Climate Action Now is not just a boat, it’s a messenger, it’s empowering, it’s proving that everyone can make a difference if each person makes just one change.

Since the 60s, people have been using Post-it Notes to leave messages. Lisa’s boat taps into that established practise but gives it a 21st Century spin.

The yacht, Climate Action Now, is completely covered in a digital vinyl hull wrap showcasing a collage of thousands of different Post-it messages. The boat is a stunning array of colour and hope and Lisa is still collecting new messages.

Everyone is invited to send a message. Lisa’s aim is to focus on actions we can all take towards a solution. 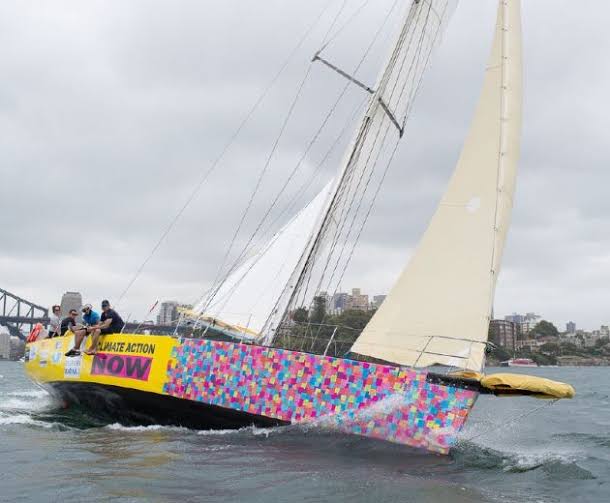 Together we will have an impressive impact, attract media and empower others to take CLIMATE ACTION NOW!

So, with messages of hope and a message to inspire woman to face challenges, we are making ready the boat and our bodies! I hope you’ll follow us on the tracker via the Sistership Training website.

The race starts on 27 December but on 5 December we set out from Sydney to Melbourne.

“The delivery will be good training; we’ll go out and do lots of tacks and gybes, man overboard tactics, and boat familiarisation drills,” Lisa says.

We’ll be posting pictures and progress on our Facebook pages, so stop by and say g’day and watch our progress in training.

Please define “CLIMATE ACTION NOW!” What do you expect to be done? First thing, I s’pose, is to convince Planet Earth to stop it’s 25,000 year wobble. We won’t have any more Warm or Ice Ages but hey! it’s a start innit?

David Jenkins - 4 hours ago
Road rules aren't the same as licencing 🤷‍♂️. Make up your mind which you're going to have a whinge about. Given hor... View
Claudio Neumann - 9 hours ago
Jesse Pricsina I feel these vibes very strongly. also get off my lawn darn kids with their scooters View
Michael Ilsley - 10 hours ago
I love scooters, fabulous! View
News 12

@The_RiotACT @The_RiotACT
With an alfresco living area complete with outdoor kitchen, you will feel like you are living in luxury in #Crace https://t.co/FiPwmUQolH (10 hours ago)