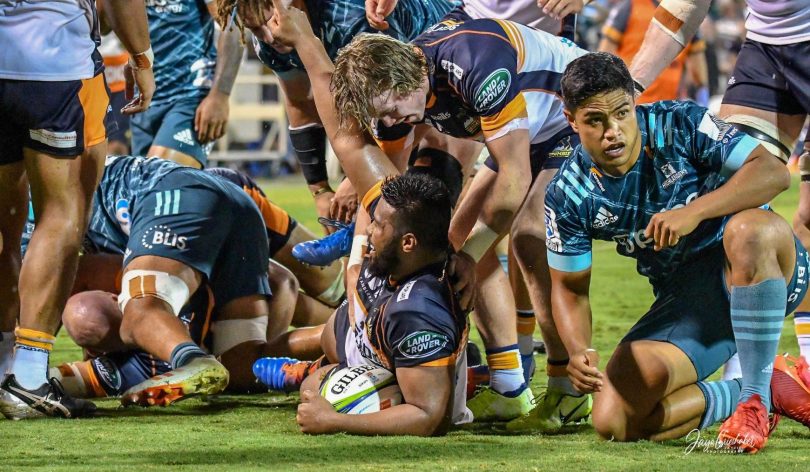 The Brumbies will take part in their first away game of the season against the Chiefs this Saturday evening. Photo: Jayzie Photography.

The ACT Brumbies cross this ditch this weekend to take on the Chiefs, where they’ll also be tackling history.

The Brumbies haven’t won in New Zealand since they beat the Hurricanes in March 2014. But that’s not the most daunting record they’re looking to erase.

The Brumbies haven’t beaten the undefeated Chiefs in Hamilton since the opening round of the 2007 Super Rugby season when the Australian side scored a 15-21 victory at Waikato Stadium.

The Brumbies are desperate to put an end to their troubles in New Zealand and break a decade-plus drought. It’s front of mind for Brumby Andy Muirhead who will start his first game of the season on the wing.

“They have a pretty vocal crowd and whatnot, but I don’t think we are far away from getting a win,” Muirhead said.

“We have gone over there and had some pretty close losses, but it isn’t something we harp on.”

Your Plus500 Brumbies team to take on the Chiefs this Saturday in Hamilton!

Coach Dan McKellar is not overly concerned with the poor run of form his team has suffered over the years and is looking forward to the team’s first away trip in 2020.

“The boys always enjoy getting away and touring together,” McKellar said. “We have to make sure we speak about our preparation and focus when we are on the road, so just understanding that we are going there to win a game of rugby and that’s where our priorities are.”

The Chiefs are top of the New Zealand conference after going three from three to begin the 2020 campaign.

Dan McKellar’s men head into the clash this weekend looking to bounce back from a heart-breaking first loss of the season against the Highlanders last weekend in Canberra.

McKellar has made three changes to the starting line-up ahead of Saturday evening’s matchup, with notable absentee Folau Fainga’a missing out due to a foot injury.

Irane Simone returns to the backline, while Connal McInerney and Muirhead will get their first starts this season.

The movement around the squad has opened up a possible opportunity for Australian under-20 representative Lachlan Lonergan to make his Super Rugby debut off the bench.

The Brumbies take on the Chiefs at FMG Stadium, Waikato, 22 February at 5:05 pm. For more information, visit The Plus500 Brumbies.