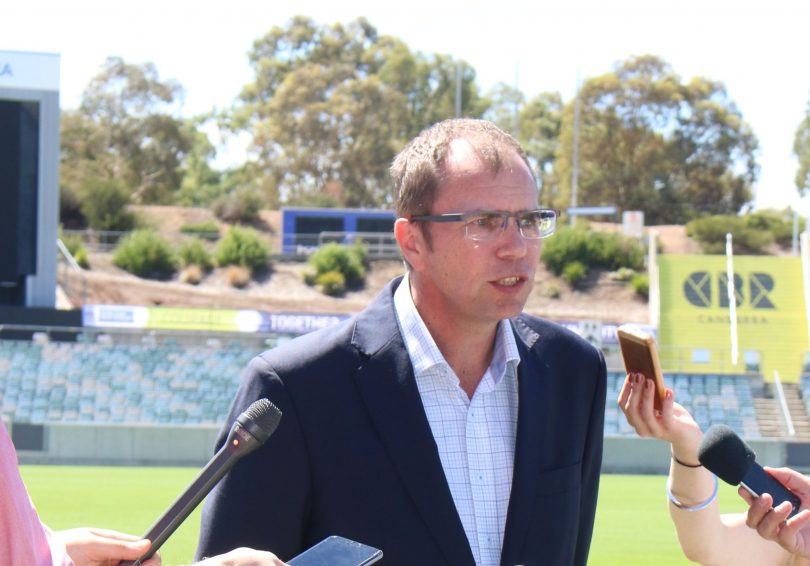 Michael Thomson has stood down as Brumbies chief. File photo.

Michael Thomson, who had been in the job since late 2016, still had a year to run on his contract but opted to go early to spend more time with his family. Phil Thomson had been the interim CEO, then a director, before taking over as chairman 12 months ago.

It’s understood Michael Thomson told the board last Thursday (20 September) that he intended to leave and after further talks today, it became official. He said it was an extremely difficult decision to resign his position with the Brumbies.

“I care deeply about the organisation, the people who make it, Canberra and the game of rugby, particularly in our region,” he said.

“The last two seasons have been ones of challenge and growth and I would hope that we are in a better position now than when I came back to the club. I have really enjoyed the journey and am sure at times I will look back and wish I was still in the role. That said, I was appointed to help stabilise Brumbies Rugby and set the platform for the future and I believe this has been achieved.

“With a second profit in two years, a stable, strong and cohesive board and management, significant increases in participation levels, a squad and coaching team well positioned to push deeply into finals and the cycle of activity at the Brumbies, as well as a young family who are growing up too fast, I feel that now is the best time for me, and the organisation to make this decision.

On Monday (24 September) Michael Thomson resigned from his position as Brumbies Rugby CEO.Thomson, who had been in the job since late 2016, still had a year to run on his contract but opted to go early to spend more time with his family.Hear from the outgoing CEO as he fronted media today. Read the full story here: ow.ly/ffZd30lWhCZ

“It has been a privilege to have been at the Brumbies on and off for nearly four years and to have had the opportunity to lead the organisation. For that I am very thankful. I fully support the appointment of Phil Thomson to the position of CEO. He is an extremely capable man of integrity and is justifiably held in high standing in the rugby community, and our region, and I wish him every success.

“I am very confident there are many good times ahead.”

In the past two years, Michael Thomson has been credited with steadying the ship at the Brumbies after a year of turbulence. For three years in a row prior to him taking over, the Brumbies incurred losses totalling $3.5 million.

Under Michael Thomson’s stewardship, the Brumbies made a profit of $15,000 last year and are on target for a surplus of around $50,000 this season. He will leave the job on 19 October and Phil Thomson, who has been working at David Pembroke’s The Content Group, will take over on 22 October.

Phil Thomson, who said the board had approached him about taking over as CEO, is excited by the task ahead.

He also paid tribute to Michael Thomson, saying he was responsible for stabilising the club and had done a great job reconnecting with the grassroots in Canberra as well as overseeing renewed growth in the code.

Feedback - 45 minutes ago
The article mentions that 'The path out will resemble last year’s easing but will include working from home for some time t... View
whatwik - 2 hours ago
With the school holidays upon us, spare a thought for children and parents (and grandparents!) in Cowra, which was among area... View
Opinion 49

Tom Worthington - 46 minutes ago
Not "Man the torpedoes", it will be: "Activate the AI in the Uninhabited Underwater Vehicles". ;-) More seriously, Australia... View
chewy14 - 46 minutes ago
JC, I've repeatedly said this isn't mainly about the hardware although it helps. And why can't we strengthen our non military... View
chewy14 - 51 minutes ago
Won't be fooled, I said it helps to protect Australia. But only partly through the hardware, the bigger benefits come from th... View
News 2

Tom Worthington - 56 minutes ago
Fond memories of the old Gowrie Hostel, where I was put up as a new public servant in the early 1980s. We all congregated to... View
Property 22

@The_RiotACT @The_RiotACT
Cold weather is sweeping in again across NSW and ACT, potentially bringing #snow, #hail, and damaging #winds with it. Here's what you need to know https://t.co/SiTWclpxRK (21 minutes ago)