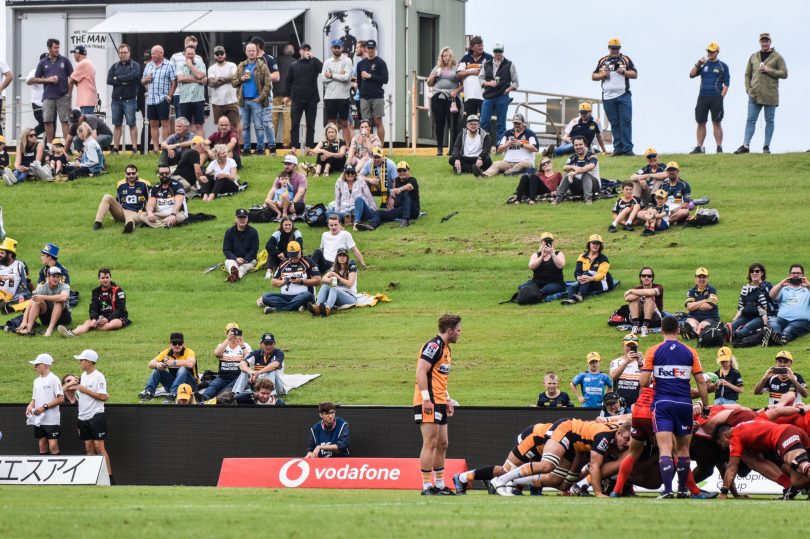 The Brumbies and Sunwolves battle it out in front of an early Friday afternoon crowd at WIN Stadium in Wollongong. Photo: Brumbies Media Twitter.

The Brumbies made it four wins from five Super Rugby matches this season with a straight-forward 47-14 victory over the Sunwolves at WIN Stadium in Wollongong on Friday afternoon (6 March).

The Canberra outfit proved too strong for the Japanese side as they racked up seven tries to two.

Brumbies coach Dan McKellar will be proud to see seven different names on the scoresheet for his side as they prepare to carry this form into their all-Aussie battle next Sunday in Canberra against the NSW Waratahs.

This victory means the Brumbies have won all five of their encounters with the Sunwolves since their inaugural campaign back in 2016.

Unfortunately, the two teams will square off just one more time in 2020 as the Tokyo-based team will not return to the competition next season due to financial reasons.

With another loss next to their name, Naoyo Okubo’s team have lost four straight matches after winning their first and only game of the season back in round one against the Rebels.

The Brumbies were delighted to open the scoring in the ninth minute knowing it was courtesy of Rob Valetini finding Ryan Lonergan who crossed the line to secure his first Super Rugby try in his first start in Brumbies colours.

Dan McKellar’s men doubled their lead nine minutes later through Will Miller after continual pressure paid off in their opponent’s quarter. Miller was able to dash over the try line after a fantastic pass back on the inside from teammate Murray Douglas to make it 14-0.

After sustaining a lot of territory and possession the Sunwolves made the Canberrans pay for giving away four straight penalties to score their first try of the afternoon thanks to Efitusi Maafu, who scored his first Super Rugby try after good work in the driving maul.

Just when half-time was on the horizon, a costly knock-on by Ben Te’o resulted in the Brumbies spreading the ball wide to find Valetini close along the sideline, but the 21-year-old skipped past a couple of challengers to score in the corner as Lonergan converted the team’s three tries to give the 2004 champions a 19-7 lead at the half-way point.

Like Lonergan, winger Toni Pulu took full advantage of his first start of the 2020 campaign to put the Brumbies up by 21 points but it came at a price for the former Chiefs player after he crashed over in the corner for the five-pointer but had to leave the field as he was injured in the process.

The point differential increased in the 54th minute when Tevita Kuridrani bulldozed his way over to notch up his 29th career Super Rugby try. Lonergan then made it five from five conversions before being subbed off to make it 35-7.

The onslaught continued with Solomone Kata scoring his third try of the year two minutes later with little-to-no-room to work with against the touchline, but the former New Zealand Warrior kept his feet in play and dived over in the corner.

The Sunwolves showed heart to fight for their second try of the contest, with Michael Stolberg making it two tries in two games to reduce the margin to 40-14.

Substitute scrum-half Joe Powell scored the Brumbies’ seventh try of the day on the siren, cementing a comfortable afternoon’s work in the ‘Gong.