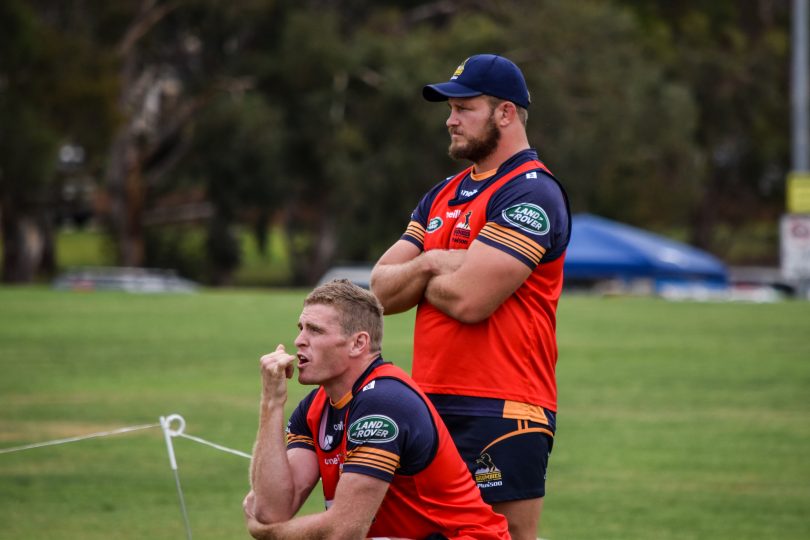 James Slipper (standing) knows all the importance that is attached to the Brumbies v Waratahs rivalry. Photo: Brumbies Media/Lachlan Lawson.

When it comes to Australian rugby, there isn’t a rivalry close to the Brumbies and the NSW Waratahs.

When these two sides lock horns, they’re after more than competition points.

There’s definite friction between the two Australian outfits and it’ll be on show this Sunday afternoon at GIO Stadium in Bruce.

The Brumbies will be hoping it provides the spark to bring crowds back to watching live rugby.

Despite starting their season with four victories and just the one agonising loss, the negative narrative surrounding their campaign thus far is the inability to attract fans to GIO Stadium.

It’s startling because performances on the field could not be any better from Dan McKellar’s team, but that has not been reflected in the attendance figures.

They have not been able to bring in more than 7,500 fans for their first three home games this campaign; however, with the Waratahs coming to town, the Brumbies hope to crack the elusive 10,000 mark.

Brumbies forward James Slipper penned a new two-year extension with the Canberrans on Thursday morning (March 12) and despite being a Queenslander at heart, he knows the significance of the rivalry, referred to as ‘Tah week’.

??? When you realise you’ll be staying at the Brumbies for two more years! #BRUvWAR

“The Brumbies boys love Tah week and being a Queenslander it’s always easy to get up for a New South Wales game,” Slipper said. “We are hoping there is a big crowd on Sunday because we are really looking forward to it.

“When you come to the Brumbies you learn about the history of the game between the two sides … It all just adds to the game and I’m keen to be involved in it. Rivalries are good for rugby, it’s why we love playing in big games and I’m sure they are no different, they will want to come beat us up.”

The hosts have made three changes for the clash on Sunday as Slipper, Joe Powell and Andy Muirhead have all been recalled to the starting line up to replace Scott Sio, Ryan Lonergan and Toni Pulu.

Waratahs full-back Kurtley Beale is set to make his 148th Super Rugby appearance, which will equal Benn Robinson’s record as the most capped Super Rugby Waratah.

The Brumbies head into Sunday’s game with a slight mental edge given they walked away victors 19-13 in this fixtures last encounter at the same venue.

The Brumbies will host the NSW Waratahs on Sunday (15 March) at 4:05 pm at GIO Stadium. Gates open at 1:15 pm for the Super W competition between the Brumbies and the Queensland Reds.

Get tickets for this seasons second doubleheader at Ticketek.

Patrick Barrett - 22 minutes ago
Dylan your fault View
Sonia Irwin - 5 hours ago
Been watching this as a client. Gotta say a bit nervous is an understatement View
Justin Newbury - 5 hours ago
Whoopsie. View
News 15

Evan James - 4 hours ago
Well said, Tim!✔ View
chewy14 - 5 hours ago
"And the federal border force was happy to let other players through, on the same exemption, before ND arrived." Who were the... View
LietDao Do - 5 hours ago
… I don’t want to see/talk about him anymore… let it past. View
Opinion 144