Brumbies named to bring down the wounded Reds

The Brumbies have announced their side for Friday’s game against the crippled champions from Queensland.

The strongest backline appears to have been picked, with big Ita Vaea starting the game, presumably to keep the Reds feeling smashed.

Great to see Dan Palmer starting again as his presence was sorely missed against the Sharks.

Fun facts from the media release: 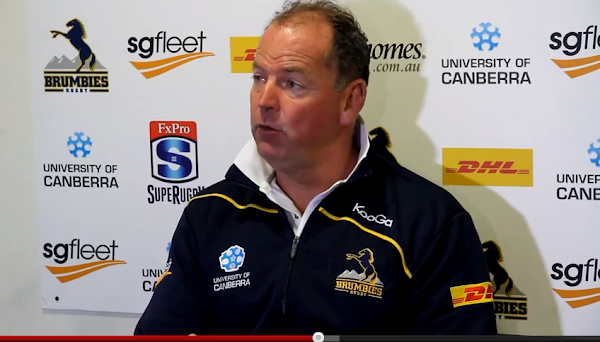 Mai Linh - 15 minutes ago
Nevil Kingston-Brown, we were just discussing that Barr’s Govt needed an effective opposition... View
Zakzook Chico - 41 minutes ago
We all remember Stanhope’s failure during the Canberra bushfires. Nevertheless, it is time for Barr to go View
Daniel J. Fitzpatrick - 51 minutes ago
Some ex politicians carry themselves with grace having left office. Many do not. This is the later. View
Community 7

Brent Hutch - 7 hours ago
Simon Lynch I'd suggest you need to go check your own facts first champ. Based on your thinking, the ACT should ignore fires... View
rationalobserver - 22 hours ago
3 points; No sane person would raise the topic of Defence force help in the same breath as raising the possibility of a law s... View
News 2

Travis Harvey - 12 hours ago
Worth every penny. The stress on parents to try to educate their children at home whilst also trying to hold down their regul... View
Bianca Rossetti - 14 hours ago
To me schools opened too soon.. I would prefer to put health before wealth View
Lifestyle 2

Capital Retro - 22 hours ago
Slowly but surely all cell-phone challenged reception areas in our region are being addressed. Last week the new Telstra 4Gx... View
show more show less
*Results are based on activity within last 7 days

It is reflective of just where the Canberra Liberals are on the election trail that it was Mark Parton's social...
Opinion 28