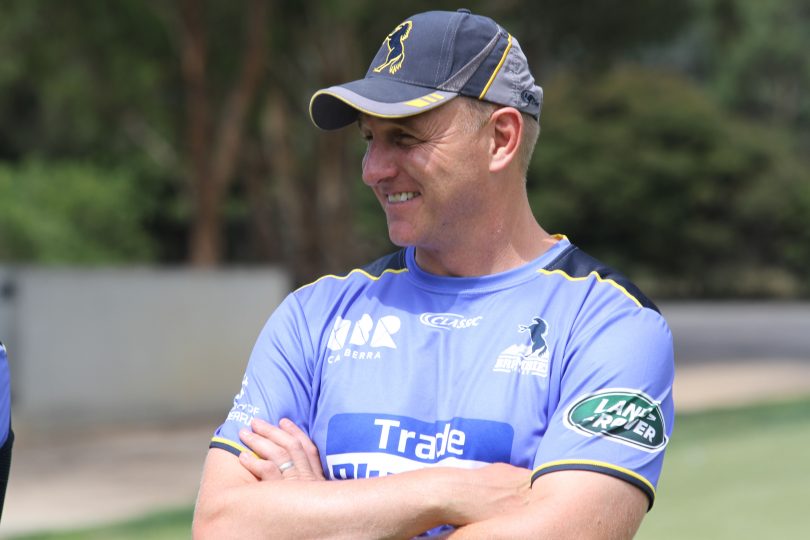 The Brumbies say they have been lacking in entertaining rugby this season but Hewat plans for that change on Saturday night – Photo: Supplied by Brumbies Rugby.

It’s been an underwhelming start to the Brumbies’ season with just one win from three games as their attack struggles to find its chemistry under new coach Dan McKellar.

But the Brumbies aren’t hiding behind any excuses when it comes to their slow start on the road.

An unsettled preseason and four weeks away from home do not justify the Brumbies frustrating start to the season according to Brumbies back coach Peter Hewat, who is looking for a more consistent 80-minute performance from the side.

“We have shown in patches what we are looking to do but we just need to now get a more consistent performance and getting those passages of play over 80 minutes of rugby.”

The former Waratah player said that the Canberra side was still adjusting to the changes made in the off-season and despite the last two performances being frustrating, there were no panic stations within the club.

“We have made a fair bit of change this year, and we are still adjusting to how we want to play in terms of our style, but no real panic stations. It’s great to be home this weekend in front of our home fans.”

“We have probably been on the road now for four weeks if you look at the Sunshine Coast trial and the Brisbane Tens. It’s going to be really pleasing for us to be home this week, sleeping in our own beds, getting a full week of training and really having a good game on Saturday night against the Sharks.”

The Brumbies slow start out of the blocks has forced the Brumbies to play catch up to gain ground on the conference-leading Rebels.

Hewat said that the Brumbies aren’t panicking at this stage of the season and are just going to have to win more of their remaining games.

The Brumbies have been lacking in entertaining rugby this season but Hewat plans for that change on Saturday night.

“We’ll definitely be playing attacking rugby, whether that’s taking early shots at goal, we’re not sure yet.”

“We’re looking to continue to play up-tempo and attacking rugby and hopefully this week we bring that spark and enthusiasm into our game and start finishing the chances we’re creating.”

Watch the Brumbies this Saturday night at 7:45 pm when they take on the Durban Sharks at Canberra Stadium. Tickets available at Ticketek.

Buck Johno - 3 hours ago
From what I remember of night rider busses it was only over summer. View
PE TE - 12 hours ago
Sean Bishop but the Uber rapes have increased View
Kim Rumble-Kozjak - 22 hours ago
Jacqleequack it was all good fun until the two hour wait in the cab line, in stilettos, without a jacket in -2 🥶❄️ View
Property 28

Lihuan Panda - 10 hours ago
from the conversations and interviews, I think some players chose not to turn up for the briefings and missed out on informat... View
Hugo Walker - 12 hours ago
Penny Ford But isn’t he rich, famous and self-entitled? Surely that should persuade the authorities to cave in to his tantr... View
Pia Kivela - 16 hours ago
Personally we are in a pandemic so we should not be having this tournament View
News 5

Colleen Alchin - 21 hours ago
This situation is appalling! Forty minutes from the national capital and you need to buy bottled water to drink and wash clot... View
Tegan Gilchrist - 1 day ago
Amy LD and the clothes!!! Swapped out all out white sheets for greys. Blazer ruined. I now fill up bottles of water from my p... View
Community 1

Lifeline Canberra - 21 hours ago
We love Sarge! Thank you for continuing to support the vital work we do in the Canberra community. Bring on Jan 30! View
show more show less
*Results are based on activity within last 7 days