Foxsports tells the tale of ACT victory on the high veldt, admittedly against the pretty ordinary Lions.

The Canberra-based franchise scored six tries, three in each half, and won comfortably despite kickers Christian Lealiifano and Jesse Mogg raising the flags with just two of their eight combined attempts.

The visitors trailed 6-5 in the first half following two penalties to Lions’ five-eighth Elton Jantjes, but the Brumbies then piled on 29 unanswered points.

The bonus point victory gave the Brumbies seven points from their two games in South Africa. 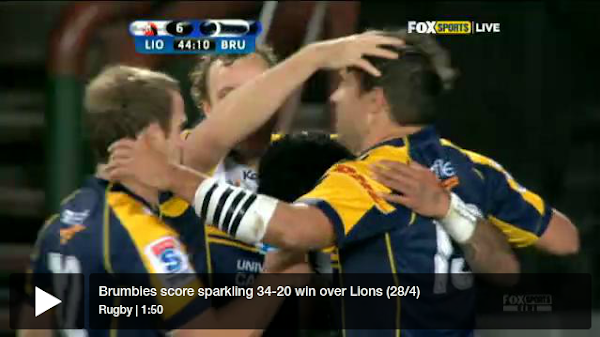 While I suspect Deans will do something stupid like playing Beale at flyhalf, he would be mad not to at least have Lealiifano on the bench as a utility. He’s probably the best player in the Australian conference at the moment.

Lealiifano for Wallaby fly half!
Wow, his game, goal kicking aside, gets better each week.

Marea Fatseas - 17 minutes ago
David Riddell the waste normally going to landfill in Mugga Lane wouldn’t be enough to meet the proposed CRS target of 300,... View
Capital Retro - 14 hours ago
Double handling makes no commercial sense but the ACT government is worried about that. It is more likely that the waste we a... View
Maya123 - 15 hours ago
I have been in Canberra since way before 2008; 1974 in my case, and I always heard Fyshwick referred to as light industrial b... View
News 45