Burning desire to run with champions 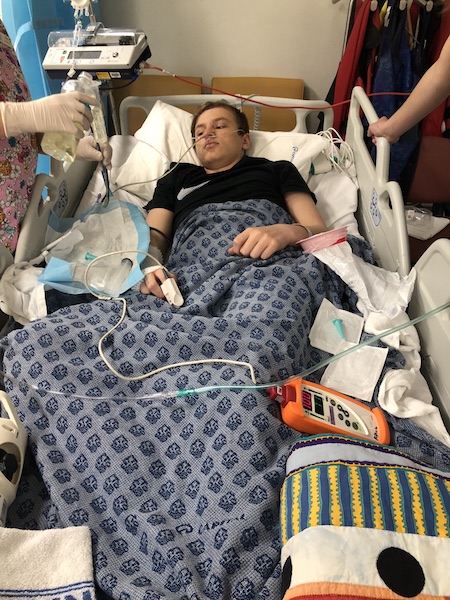 TJ in a hospital bed preparing for a CT scan during his most recent hospital stay before surgery. Photos: Supplied.

Even as a junior football player, Thomas (TJ) Campagna had excellent hand-eye coordination and oozed confidence on the field. It was a common sight to see him gather the ball from the kickoff and cut deftly past would-be-tacklers on his way to the try line, running at gaps at top speed. He had something else too. Strength. And more – the dedication that separates elite footballers from ones who never quite make it.

When he was a toddler his mum and dad couldn’t keep up with the soft, stuffed footballs he wore out playing footy by himself in the hallway.

Rugby was his first love, league came second, especially after that game as an 11- year-old, scoring on his first touch of the ball.

Then, an unimaginable nightmare snatched it all away. Early in the afternoon in December 2017, TJ was in the back seat of his mother Alanna Davis’ car when a drug-addled driver smashed into them as they headed down to the South Coast for a holiday. 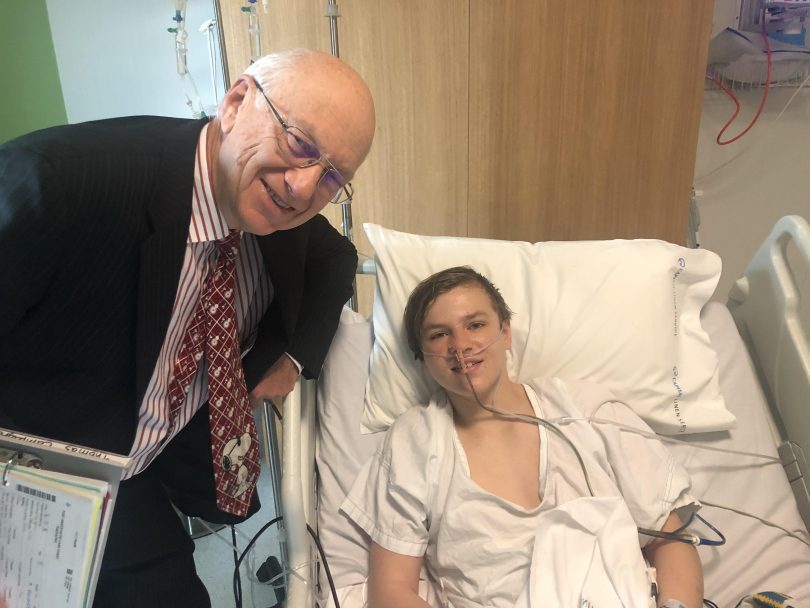 Surgeon Dr George Malecky with TJ. The 14-year-old has faced each of his medical ordeals with great courage.

TJ remembers little, other than fearing his mother was dead, and their friend Christina Gailey, a front-seat passenger, had lost a leg. Neither of those fears was realised, but the horror comes back repeatedly.

These days, even though he has won the hearts of his medical carers with his strength and determination to heal his body, TJ is not the same fearless rugby player as he once was. As Alanna explains:

“There are times he goes back to the hospital just to walk around the wards, because he feels safe there.” It breaks her heart now that he no longer goes to football games. He won’t watch his teammates play.

Somewhere deep inside him though, burns a hope to return to football next year, maybe in time for the representative trials in March.

Canberrans have rallied around TJ ever since the smash and on Saturday night will do so again at the Southern Cross Club, Woden, with a dinner and charity auction (See details below).

The crash impact perforated TJ’s bowel, and before surgeons could stem the damage with a stoma, loose faeces had caused multiple adhesions – bands of scarring – internally. Surgeons reversed the stoma in May, but two months later, piercing pain returned and continued to intensify.

“In October he had a lot of pain and vomiting come on suddenly,” Alanna says. “One of those adhesions had wrapped around his large intestine, strangling it like a tree root round a toilet pipe. Nothing was able to get through, everything he swallowed came straight back up again,” she says.

His stomach was still producing natural digestive juices, which had nothing to work on, so a nasal tube was inserted into his stomach, with a pump sucking out the stomach contents. Towards the end, nurses continued drawing up the contents with a syringe before he had to have urgent surgery. Doctors have come to realise TJ is super tough. Consequently, when the pain had flattened him, they knew his condition was critical.

Alanna cannot comment on his long-term prognosis. It remains unclear. She hopes he can once again attempt integrating into Canberra Grammar School, and perhaps play rugby next year. 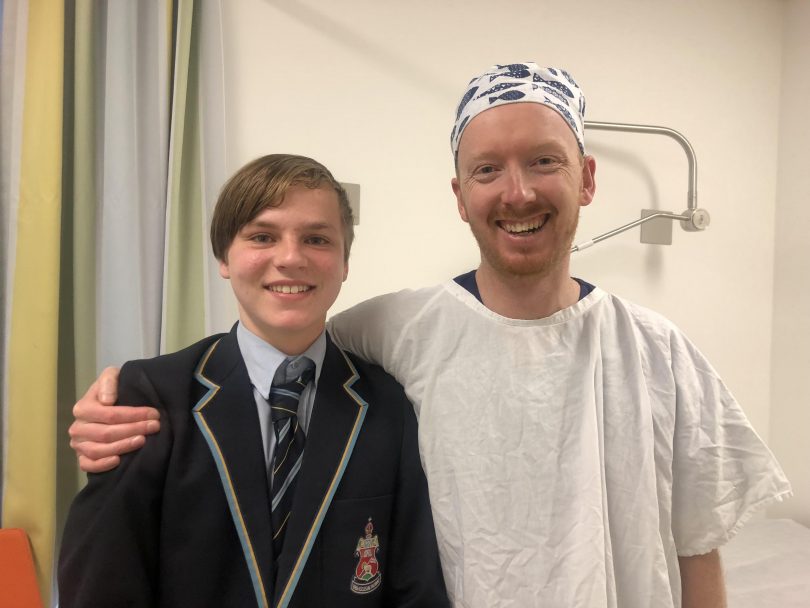 Surgeon Dr Ben Wagstaff with TJ, who has formed a close bond with his medical team. An auction and dinner on Saturday night will raise money for the hospital’s intensive care unit, Adolescents and PARTY Program

“We only need one more complication and that will be thrown out the door,” she says with a note of caution.

He has a team of physios, psychological and medical specialists who his mother coordinates, in between working and studying.

“The trauma team at the Canberra Hospital are just amazing,” Alanna says.

“When he is in hospital we rely on the nurses, they are just amazing. There is no way we could have done it without the nurses and medical team, all the work they put in to us and the attention they give us is incredible.

“We have our own psychologist and there are days that are – don’t get me wrong – just shit. You want to yell and scream. And then there are good days.”

His mother says Canberra Grammar senior and junior students have been wonderful supporters.

TJ doesn’t like showing people his scars. All his friends are keen to know when he will be back playing, but he can’t manage those questions at the moment. It is too upsetting for him.

“If he could choose anything in the world it would be to play footy all day every day,” Alanna says. “To have that taken away from him, it’s just been heartbreaking to watch.’’

Canberrans are encouraged to wear their favourite footy gear on Saturday night when the dinner and charity auction begins at 6:30 pm. Proceeds of the auction and dinner are being donated to the Canberra Hospital Foundation for the benefit of an intensive care unit, Adolescents and PARTY Program.

Bidding will continue until 9 pm.

“Anyone on our database around the country, so 140,000 people, can be bidding on the items, in conjunction with people in the room on Saturday night,” Rob says. “They will be bidding against the Allbids database.”

Allbids has been hosting charity auctions for 15 years. “We are happy to lend a hand to charities in need,” Rob says.

Mark Johnson - 20 minutes ago
If it’s not licenced what’s it doing on a roadway anyway … View
Julie Macklin - 5 hours ago
Alicia Conley The ACT has no cycle paths. They are shared paths. Yes, those around the lake were built with people on bikes i... View
chewy14 - 6 hours ago
"That they are public doesn’t mean there are no rules for using them." Exactly my point. That the rules should preclude cyc... View
Community 16

Karla Hickey - 5 hours ago
Iain, I agree, also not a jumper (like Pete calls it, lol) View
News 9

chewy14 - 5 hours ago
Nobody, Interestingly, one year later, that number is down to 100 under construction or "planned", with another 300 "proposed... View
whatwik - 11 hours ago
There's certainly a nuclear reaction from the usual suspects here any time renewables are mentioned. View
Futureproof - 12 hours ago
Nuclear - the Greens say no New hydro dams - the Greens say no Windfarms in remote areas - Bob Brown says no... View
Community 49

Juanita Tee - 6 hours ago
David Keir what are you specifically doing for them 🙃... View
Liv Miller - 8 hours ago
Rachel Edmondstone love 💓 this View
David Keir - 11 hours ago
Virginia Loizou sounds like you’re the one whinging champ View
Property 28

David Conway - 9 hours ago
Colin Ball totally not fair and they get to play grand theft auto in prison.... View
Community 8

Elizabeth Farrar - 15 hours ago
Linda Jepsen you could do it over 2 days with a car shuffle & stay somewhere overnight. View
show more show less
*Results are based on activity within last 7 days