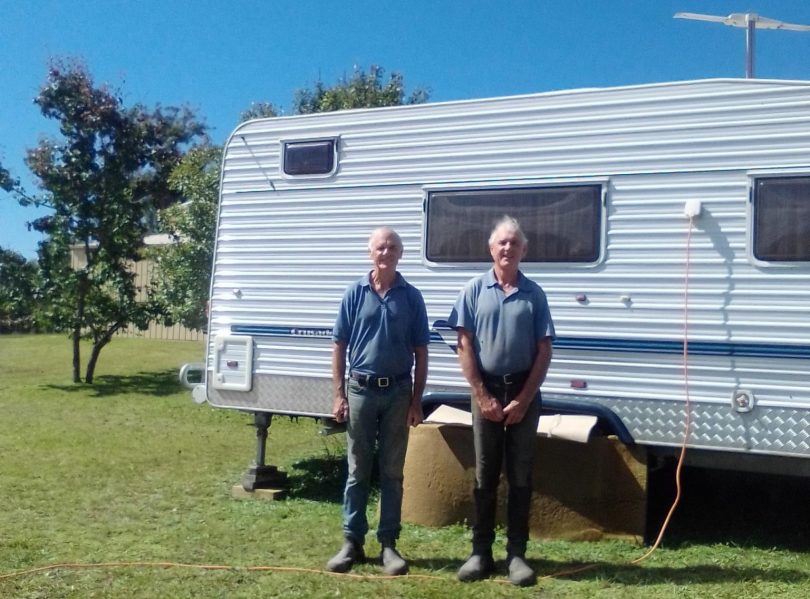 Mirror twins Peter and David Abel are being denied a Homeowner grant because they are not a couple. Photo: Supplied.

At 68, Mogo mirror twins Peter and David Abel have negotiated all of life’s twists and turns as a united front. Now, the very relationship that has defined them is being used by the Federal Government to deny access to funds to help them rebuild after the Black Summer bushfires.

In what’s been described as a heartless move, the pair who have lived together their whole lives have been denied financial help to rebuild their home because, as brothers, they don’t fit HomeBuilder grant criteria.

“HomeBuilder is only available to an individual or a couple,” David said. “A married couple can get it, defactos can get it, but we can’t because we are brothers.

“And we are not alone. There are others in the area who are brothers, or fathers and sons, and mothers and daughters, who aren’t eligible.

“I was a bit disappointed. I thought they would be more flexible for bushfire victims.”

It’s just one more cruel blow for the twins, who now face a second winter living in a cramped caravan on their Mogo property.

“We’ve had 14 months in a caravan,” David said. “We are either hot or cold, and it’s a small space we are sharing.”

After losing the family home in the Ash Wednesday fires in Victoria, the brothers moved to the South Coast in 1987 and bought their new property in Mogo five years later.

When the New Year’s Eve fire hit, they stayed to defend their home.

“We had a good fire plan,” David said, “and we thought we had it, then there was a wind change and it came from the south. Sizeable embers got under the pine ceiling and the whole thing burnt down in five minutes.”

Undeterred, the men have gone about rebuilding on their bush block, but the expenses keep mounting. They thought the Federal Government’s HomeBuilder grant would help, but their hopes were crushed by a letter from the office of Housing Minister Michael Sukkar.

“Applicants must be listed on the certificate of title for the property,” it said. “If more than one person is listed on the certificate of title, they must jointly apply for the HomeBuilder grant as a couple. Generally, and as implemented under the Commonwealth’s First Home Loan Deposit Scheme, this would include couples that are legally married, in a registered domestic relationship or those living as a couple on a genuine domestic basis.”

Member for Gilmore Fiona Phillips has gone in to bat for the brothers, and she’s been backed by Opposition Housing spokesperson Jason Clare. 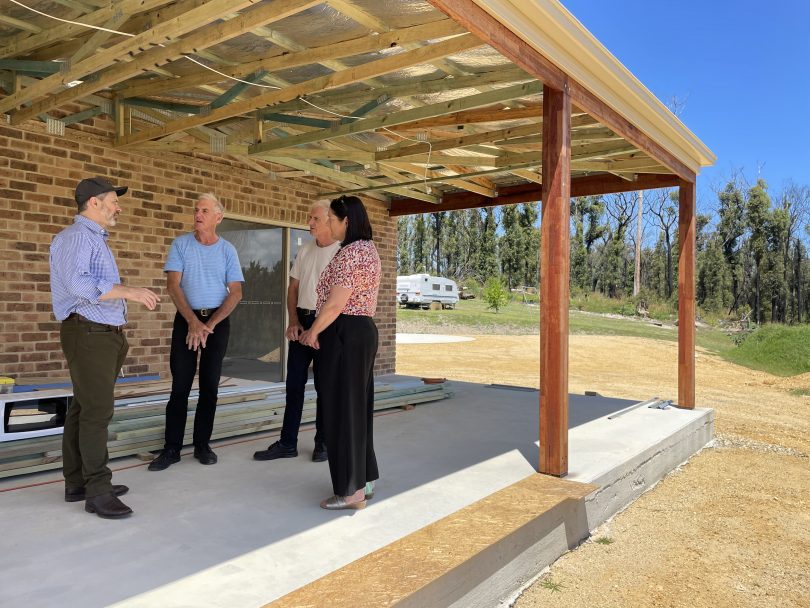 “We wrote to the [Federal] Government on behalf of Peter and David asking them to have a heart and provide them with the grant,” Ms Phillips said.

“When they applied for a HomeBuilder grant, they were rejected by the Morrison Government because they are not ‘a couple’. And now, to add insult to injury, the government has told them to go and ask a charity for help to rebuild their home.”

Ms Phillips said what was particularly offensive was the direction that “there is a range of other assistance available to people affected by the fires, including grants provided by the Red Cross”.

“This is a classic example of a government that just doesn’t get it,” she said. “This isn’t about charity, it’s about fairness.

“If anyone deserves help to rebuild their home it’s brothers like Peter and David who lost their home in the fire and have lived together their whole life.

“Instead of telling Peter and David they should go and see a charity, they should just give them the grant.

“This could be fixed right now with a stroke of a pen. The fact that they won’t shows how heartless they really are.”

Is there a go fund me for these guys?

Who say’s!!! Every day I hear more rubbish! Can’t believe we take any notice of such nonesense!!!!

Others have been denied rural grant help because they could not prove they earned a living off their land in the last two years. But that was because drought made it impossible to make profit. All those LNP promises are worthless and heartless.

Anyone living in or aspiring to live in known bushfire or flood areas should be forced to have property insurance cover as part of their annual expenditure.

This would include most of the existing homes in Canberra, by the way.

This is appalling. They aren’t trying to game the system. They are simply 2 people in a family relationship who need a home. Change the regulations!

I guess they won’t be voting for the government next time around.

On a different note… why did so many have no insurance?

Clive John Trenton can’t afford it. With the price of living so high who can afford insurance as well? My insurance jumped $50 per month on each car when I moved to a postcode that had been affected by the bushfires. I now can’t afford contents insurance.

Cristal Tatterson that’s a risk you take.. why should the government subsidy those without whilst not helping those with?

The government needs to acknowledge that it is almost impossible for most people to live by themselves and must share to cope financially or for health reasons. It makes no sense to discriminate against the two brothers or other people who don’t fit the ‘couple’ description. However those charities saving for future disasters should also be stepping up.

This is appalling and outrageous. Our politicians and bureaucrats need to look at the needs of those who have suffered so much.

I feel for these guys, surely they fit under a domestic arrangement in terms of contributing to the house hold? So…
more serious issues aside, what’s the definition of ‘mirror’ twins? Is that like identical twins but one is left handed and the other right? Twins Research Australia

Kat Sychee C that is correct re mirror twins, plus other reasons

Kat Sychee C my nieces are mirror twins; it’s where they are a DNA’d mirrored replica of each other, even down to the swirl of hair at the centre of their scalp growing in opposite directions. Instead of looking identical side by side, rather they are identical when they look at each other – it’s like looking in a mirror. There’s probably more to it than that, but that’s my general understanding based on my experience with my nieces.

Thats rediculous another example of government stuff ups cut the red tape and do the right human thing.😡