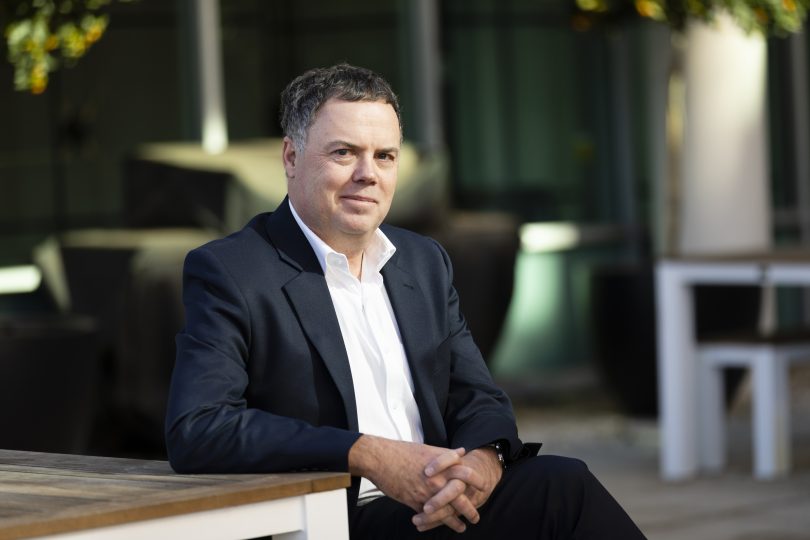 Dr Michael Schaper says the Business Chamber’s membership grew by almost 10 per cent over 2019 and now stands at almost 600.

Chief executive officer Dr Michael Schaper said about three years ago the Business Chamber recorded a $500,000 loss, leaving negative equity on the balance sheet, and not a good place to be when liabilities outweighed assets.

“The last two financial years have been about repairing that,” Dr Schaper said. “This year, as the annual report shows, we have cleared that, so we have a modest, positive balance sheet, that is the only way it will stay from here on in, as far as I’m concerned. As Canberra’s peak business body, it’s important that we perform strongly, keep our own house in order and continue to deliver on major new initiatives for our members,” he said.

According to the annual report, the use of outside consultants was substantially reduced, internal staffing was re-organised and specific managers appointed for important activities, the most significant being a chief operating officer and deputy for the chief executive who will focus on policy and advocacy work. The Business Chamber’s main focus will be on policies in preparation for the ACT elections in October 2020.

Running a tight ship while maintaining services, Dr Schaper said the focus would be on what members were looking for, rather than extraneous activities. A members’ survey in February showed businesses wanted three important things:

The Business Chamber had run four or five major events, each attracting several hundred people. They were run on a break-even basis and were not aimed to be profit-making.

“We have deliberately stepped back from taking and running many programs on behalf of the ACT Government,” Dr Schaper said. “We think there are programs that are still important to run, and we are happy to partner with them, like trade and wage advice to employers. But there are other areas where we think we don’t need to be offering that and, in fact, it is probably better if we don’t rely too much on the government for our income.”

On the policy front, Dr Schaper does not agree with a view that the federal government is overly fixated on a surplus, creating less demand for service-oriented businesses in Canberra.

“I don’t get a lot of reports on that. In fact, as a business organisation, we have gone on the record to say we think the territory government should also be operating on a balanced or surplus level because it needs to live within its means. Increasingly though, for local businesses, it is the Canberra community, rather than federal services that are the principal driver of a lot of their own success.”

About two-thirds of employment in Canberra is in the private sector, which equates to 28,000 local businesses.

“Increasingly, businesses are succeeding and thriving off their own trade between each other,” Dr Schaper said. “Some businesses perhaps will have been beneficiaries when government spends more than it needs. We think just as we need our own businesses to trade at a profit or at least break even, we expect the government to do so as well.”

The Business Chamber’s membership grew by almost 10 per cent over 2019 and now stands at almost 600.

“In addition, we have become the only state or territory chamber in the country that has diplomatic missions as direct members,” Dr Schaper said. “Panama, Mexico and Russia have all joined in recent months, and we hope to welcome more in the future.”

Other achievements highlighted in the annual report were reaching 8,000 contacts listed on the business chamber’s database of regional local businesses and more than 1,500 phone calls and enquiries received by its workplace relations service advice lines.

“We are keen to grow our membership. The Business Chamber is a broad church that intends to represent the full cross-section of the business community, and we welcome any and all new members.”

To learn more about the Chamber’s advocacy and support services, visit the Canberra Business Chamber.

The Phillip Business Community have also been touched by the hand of Dr. Michael Schaper and the staff of the Canberra Business Chamber. We have found that they are very focused on establishing strong connections with all the Business Districts in Canberra.
They established regular monthly meetings with ourselves, Fyshwick, Mitchell and Hume representatives and are now looking to extend their reach to similar business groups in Tuggeranong, Belconnen and Gungahlin.
Congratulations Michael on a great turnaround and interest in building stronger connections.

Annie Wyer - 17 minutes ago
Jesse Mahoney I tried growing a whole lot in Belconnen around my complex and they faced east, they all got powdery mildew, th... View
Jesse Mahoney - 52 minutes ago
Annie Wyer I'm a post graduate trained forester with many years experience on a technical level, I know a bit about trees. Cr... View
Breaking 71

Krystyna Topor - 21 minutes ago
Helen Topor wow how unnerving. Nothing noticed by me, I'm on the ground floor. Other Sydneysiders felt tremors, however they... View
Bridget Phillips - 56 minutes ago
Jorge Gatica not in Downer either. My son lives in Wadonga. My daughter in law to be said it was awful there. My 5 year old g... View
Margaret Barnes - 1 hour ago
We didn’t feel anything here in Braidwood. View
Opinion 190

Gazza Hompepper - 26 minutes ago
Why upgrade the Canberra railway station if you cannot travel there View
Brian Kilgannon - 36 minutes ago
Moving the Kingston train station is a huge waste of money View
Brett Wheeler - 37 minutes ago
I used to love train travel but last time I tried to utilise it to go to Sydney with a pushbike, the difficulties were not wo... View
Opinion 12

Peter Bee - 58 minutes ago
Craig Sutton . A big miner or something would need to under-right an NT team. The critical mass of corporate support isn’t... View
Craig Sutton - 1 hour ago
Peter Bee Tassie and Northern Australia should be the priority for the AFL. Then they'll have a truly national competition, w... View
Craig Sutton - 1 hour ago
Failed? GWS and the Lions both have 30k members which is more than most of the NRL clubs except Souths and Para. Even the Sun... View
News 12

Janice Wilson - 3 hours ago
So beautiful. View
show more show less
*Results are based on activity within last 7 days

The search for Canberra’s oldest businesses, then, now and always

@The_RiotACT @The_RiotACT
Chief Minister Andrew Barr said modelling shows #hospitalisations and deaths will increase as jurisdictions begin to reopen, even when the 70 and 80 per cent fully #vaccinated thresholds outlined in the national plan are met https://t.co/XLk2fmaq5q (38 minutes ago)