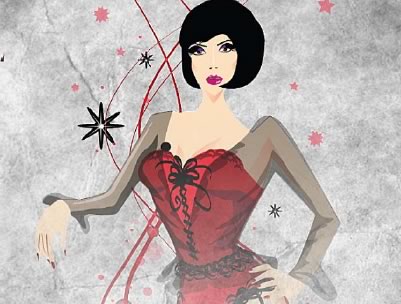 In the early 1930s American would-be writer Clifford Bradshaw (Mat Chardon O’Dea) travels to Berlin to find inspiration. Rather than actually trying to write something he frequents nightclubs and that leads to his relationship with cabaret superstar Sally Bowles (Kelly Roberts). Meanwhile Germany is changing. The Nazis might be something more than just another political party…

The thing that sells this show is its energy. Angel Dolejsi is superb as the emcee, bending and twisting gender every way he can. The ensemble follow his lead and find amazing life exploring new, more fluid identities. Cabaret is an excellent musical and this energy carries the ensemble (and the audience) through fun production numbers. Choreography is simple but clean: the emphasis here is on the singing, not the dancing. The highlights of the show are the nightclub performance numbers and it’s worth seeing the show just for these scenes.

Despite raunchy material the cast treat each other with respect on stage (which is wonderful!) but this means that scenes that should be bawdy and transgressive feel chaste. It was fascinating to watch hands or lips head for intended destinations and then pull up early or land somewhere safer. Angel Dolejsi was an utter gentlemen in his many routines with voluptuous, fishnet clad ladies but I really wanted to see him be a bit of an animal and gnaw, bite or lick something. Grinding and thrusting were too frequently not acts performed on someone’s body but open offers to empty space. For the choreography to be convincing as cabaret it needs to push more boundaries.

Overall this production emphasises the love in the story rather than the lust. Sally and Clifford have a spectacularly polite courtship and then quickly settle down into an unrealistically stable relationship. Meanwhile, in the supporting story a lot of time is spent developing the touching late-life romance between Sally’s landlady (Ros Engledow) and her Jewish suitor (Ian Croker). I felt that there could have been more contrast between these two relationships: the complexity of Sally and Clifford’s relationship (between an alcoholic manic pixie dream girl and a closet homosexual) was never developed as anything more than a straightforward love story. The cabaret should be a place for raw desire to reign – especially repressed or forbidden desires. Clifford’s homosexuality (or bisexuality) is referenced repeatedly but only inconsistently hinted at in performance. Croker and Engledow were tender as ageing lovers but I was never quite able to believe the relationship between Sally and Clifford.

At its core this is a disaster story like Pompeii or Titanic (a comparison knowingly alluded to in the script). In a disaster story people are going about their lives and relationships when an uncontrollable external catastrophe changes everything. That’s exactly what happens here, except that the erupting volcano is the Nazi Party. Here the Nazis are a force of nature that seemingly comes from nowhere. This production has a shocking ending that (while powerful) doesn’t feel fully earned. The Nazis can be seen as an insane, ruthless reactionary force rising up against the seedy debauchery and decadency of the Weimar Republic. But here the cabaret is almost family-friendly. If there had been a darker side to the cabaret this could have been tragedy, but instead it’s a disaster movie – although a disaster movie with an amazing soundtrack.

JS9 - 1 hour ago
Solid choice with Elizabeth Lee - far less convinced by the choice of Guilia Jones as deputy, but this presents them with a c... View
Breaking 1

franky22 - 3 hours ago
ACT Policing are a joke and hopelessly inefficient. This request for public assistance should have been made within days of t... View
News 1

Capital Retro - 16 hours ago
One comment on this thread was the Australian Electric Vehicle Associate has given advice to the ACT govt. on its policy that... View
Heavs - 19 hours ago
Five superfluous words in that last sentence. View
JC - 20 hours ago
What policy? Always trying to make a political point. What’s clear is you don’t know much about electronics and electrica... View
News 2

russianafroman - 18 hours ago
Terribly underfunded. Around Gungahlin it's hip height. There should be double or triple the amount of mowers. It's not justi... View
News 33

ACT Policing is investigating an assault that occurred on Tuesday, 13 October at Belconnen Mall. According to police, at about...
News 21

The telegenic Dr Nick Coatsworth became a household name during the Commonwealth response to COVID-19, and before that led Australian...
Property 8

It's done. It's dusted. It's finally over. The 2020 ACT election is behind us, but many Canberrans are still expressing...
Food & Wine 57

Civic will see new life breathed into it with the opening this Thursday (22 October) of the long-awaited Verity Lane....
News 69

@The_RiotACT @The_RiotACT
Telstra's 5G network continues to expand, and is now available in Queanbeyan, Malua Bay, Nowra & Goulburn as well as the ACT https://t.co/oWNwTNSiU3 (16 minutes ago)

@The_RiotACT @The_RiotACT
How does a hearing-impaired parent teach their child to talk? That is one of the challenges a disability peer group is confronting head-on https://t.co/TXsjQRFUfi (1 hour ago)