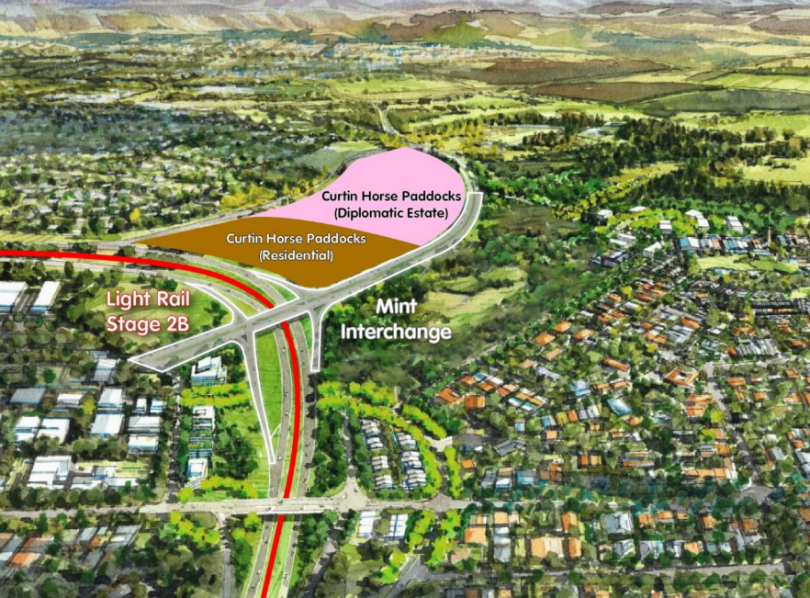 A suggested new interchange to deal with the traffic ramifications of the new diplomatic estate and planned residential development on the Yarra Glen light rail corridor. Image: PTCBR.

The Commonwealth should help fund new infrastructure to service the proposed Curtin diplomatic estate, including a new interchange so Curtin and Deakin residents do not bear the brunt of new southbound traffic flows from the estate, according to the Public Transport Association of Canberra (PTCBR).

In its submission on the National Capital Authority’s draft amendment to rezone the North Curtin Horse Paddock, PTCBR also calls for the list of permissible uses of the land to be broadened to include shops, offices, cafes, hotels and community facilities, as well as the creation of a green spine and a path network to encourage active travel.

PTCBR chair Ryan Hemsley said that after a less than ideal process, the NCA now needed to accept responsibility for limiting the impact of this new estate on the amenity of Canberra residents.

“This is not something that can be fixed with a bucket of white paint and a new set of traffic lights. The development of the Curtin Horse Paddocks will require a complete rethink of public transport and private vehicle movements around and throughout the estate,” he said.

Mr Hemsley said that while Curtin and Deakin residents would be the most affected by the changed traffic environment, Weston Creek and Molonglo commuters also faced substantial delays along the Cotter Road without new works.

PTCBR suggests a Mint Interchange, like that proposed by the former Land Development Agency, to deal with the original Yarralumla Brickworks residential proposal, which extended from the Cotter Road to Denison Street, complemented by the extension of Canberra’s light rail network to Woden.

”To avoid a repeat of the public stoushes on the alignments of Light Rail Stage 2 and the Gungahlin Drive Extension, PTCBR recommends that the National Capital Authority works with the ACT Government to ensure these future infrastructure requirements are identified, incorporated into the National Capital Plan and provided with long-term joint funding arrangements as part of detailed design work for the estate,” the submission says.

Mr Hemsley said the ACT Government was already set to invest heavily along the adjacent corridor as part of light rail Stage 2B.

“While light rail stage two is a critical piece of the puzzle, we don’t believe it’s acceptable for the ACT ratepayer to foot the entire infrastructure bill for this rezoning, especially when 60 per cent of the site will deliver minimal financial returns to the Territory,” Mr Hemsley said.

“We urge the NCA to work with the ACT Government to deliver equally good infrastructure to support the development of this sizable diplomatic estate.”

”Long term, DA95 should also encourage the naturalisation of Yarralumla Creek. In combination with high amenity walking and cycling connections, this has the potential to transform a concrete barrier into a green spine connecting the National Arboretum, the National Zoo and Aquarium and Lake Burley Griffin to the Woden Town Centre and surrounding suburbs.”

A copy of PTCBR’s submission on DA95 can be viewed here.

Hear hear, PTCBR. Particularly the permissible uses part. But all of the points are good ones.

whatwik - 6 hours ago
Shock, horror! - it's true! The NSW Liberal Party wants "to charge up the Nation and make NSW the Norway of Australia when it... View
Capital Retro - 9 hours ago
Still waiting for the details of those mythical fossil fuel subsidies. View
Lifestyle 11

Capital Retro - 7 hours ago
Indeed, 29% were made in China one recent month and most of those went to Europe. Most other EV brands are made in China. If... View
Capital Retro - 9 hours ago
If a diesel engine needs an operating temperature of up to 600 degrees to "clean it up", why do they all now come with Diesel... View
Ol L - 9 hours ago
Tesla’s for one are Chinese made. A luxury car tax on a Chinese car? Please…… View
News 1

Capital Crime Files - 9 hours ago
Sam Warry and wrote about and had an event last year to mark the 80th anniversary of the air disaster. https://www.google.com... View
Lyn Tutt - 9 hours ago
Rayleen Jordon not a helicopter some random light View
Property 17

Tim Gardner - 9 hours ago
Agents are not being fair in this current market, I know of 2 sales in 2 weeks that the asking price was accepted, then the a... View
James Watt - 11 hours ago
Joel Suryawanshi if you were selling your house, wouldn’t you want your agent to maximise your sale price? Not sure why the... View
News 1

Capital Retro - 9 hours ago
Careful what you wish for or you will cop the FOGO odour as well. View
News 2

consumeradvocatecanberra - 9 hours ago
I am a Vietnam Vet and spent 40 years in Defence. I try to keep abreast of the mumbo jumbo that is coming from the Government... View
Community 2