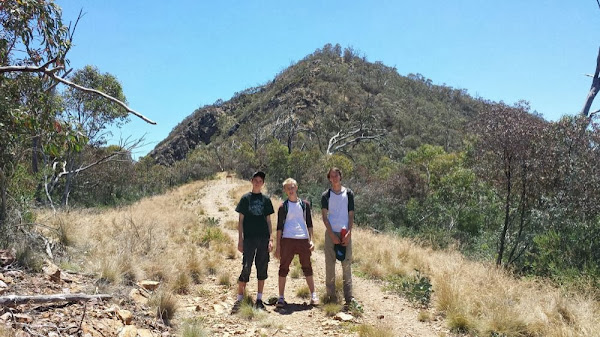 I wage a ceaseless battle to stop my sons bodies turning into X-Box driven mush. As part of the struggle, I recently took them out to do the Camel’s Hump walk at the Tidbinbilla Nature Reserve. The Camel’s Hump is a prominent peak in the range of hills that run along the Western side of the reserve.

This walk to the Hump is one of the longest and most difficult of the marked walks in the reserve. The long option starts from the Visitor Centre and is over 20km return, but there is a shorter option starts near the bottom of the range and is indicated as being about 12 km return. 20km up a mountain is a pretty long hike to attempt in one day, and with 3 teenagers in tow I decided we should take the shorter option.

The walk starts at the Mountain Creek car park in the reserve, and follows the fire trail to the base of the Hump. The first 1500m or so is pretty steep, but after that it’s a steady uphill hike the rest of the way. Interestingly, the signs indicate that the walk to the Hump is less than 6km, but my GPS showed a total distance travelled of over 7km. My GPS also indicated a climb from the car park to the base of the Hump of around 500m.

There are spectacular views along the way out over South Canberra, and we stopped frequently to rest, eat, drink, talk, and enjoy the scenery. With all the stops, it took us about two and a quarter hours to get to the base of the Hump. 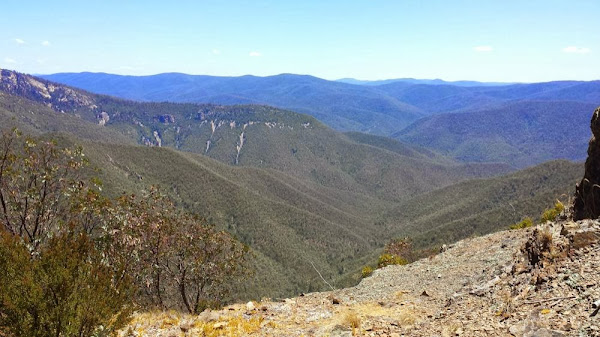 The fire trail actually circles around the peak, but previous hikers have created a not very clear path off the trail and up through the scrub to the top. After a breather and some lunch we started the final climb to the peak, but we didn’t quite get there. The final climb from the trail involves scrambling on all fours over very loose and treacherous footing up a fairly extreme slope, and there was a tremendous gale blowing from the West as we approached the top. It got to the point that we were being so buffeted by the wind that we were having trouble maintaining our position on the slope. A fall at that point would’ve involved a long and rapid drop, with pretty serious consequences at the end. And while researching the walk I’d read a story on a local hiking blog where a walker had broken his ankle on the nearby John’s Peak, and it had taken most of the afternoon to get him off.

We all agreed that discretion is the better part of valour, so we scrambled and slid on our bums back down the slope to the fire trail and started walking back to the car. The return journey, being downhill, was easy going and took 90 minutes, with two 5 minute breathers included.

The three photos show my boys as we near the base of the Hump, a view across Tuggeranong from near the peak with the tracking station in the foreground, and the view from near the peak across the formidable and awe-inspiring terrain to the west of the reserve. 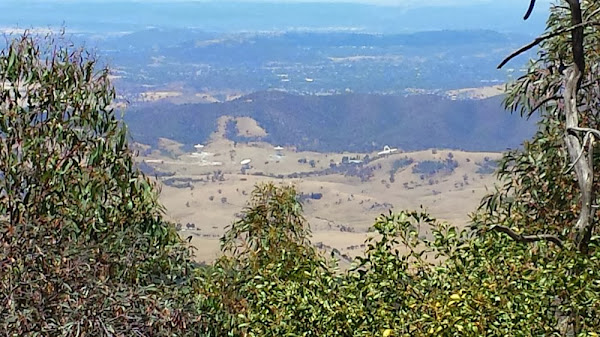 As usual, we were equipped with food, lots of water, sunscreen, 1:25000 topographical map, compass, GPS, two handheld radios, mobile phones, a medical kit, space blankets, a hootchie, paracord, a Leatherman tool and a couple of sturdy knives. No EPIRB as yet, but I’ll probably be getting one of them for future walks. The level of equipment might seem overly cautious given the nature of the walk, but I’ve got this far by being cautious and I intend to keep going that way. Conversely, I’ve passed people on trails out in that area who have been miles from any source of assistance while dressed in fashionable street wear, shod in fragile street sandals and equipped with absolutely nothing at all. Disasters waiting to happen.

Anyway, this is a really excellent walk through some very beautiful country. It’s pretty long, but anyone with a moderate level of fitness should be able to complete it without too much trouble, and the rewards are definitely worth it.

In terms of ill preparation I did the Charlottes pass to Blue lake walk at easter. I was amazed at the number of people ill equipped for that walk. I had three layers on in the end and most of the walkers who made it to blue lake were equipped for the conditions. It didn’t stop people in jeans and a jumper from trying before freezing halfway up and turning back.

Nice photos, LSWCHP! Unfortunately, age & health issues discourage me from doing any more strenuous walks, as this appears to be; maybe I’ll try walking up to the base of the Hump sometime. I’ve substituted slow, careful photographic sessions outdoors, these days, for the walks-for-the-sake-of-walking. Good onya for getting the kids out there!

Just a note to maxblues (comment # 7): everybody knows that in America, ‘hooch’ is moonshine (illegally distilled mountain spirits), though sometimes it’s a term applied to any strong alcoholic beverage. Very different from anything to do with shelter! 😀

I followed JB’s link and it eventually took me to The Urban Dictionary and other places that define a Hootchie as “trashy, fowl talking, provocative dressing, loud, appearing confident but stupid. (used more for women)”

Luckily, my hootchie was of the type described by maxblues, and it’s far more useful in the bush than a provocatively dressed, confident but stupid person of any gender.

🙂 Great shots and a nice story – thanks.

In the Aussie army a hootchie was a standard piece of tarpaulin issued to each soldier in the field to be used as a personal shelter. It had press studs, so that two diggers could join them together and eyelets/loops so they could be hung between trees (no tentpoles…so you had to hope there were trees or at least sticks lying around). Americans sometimes referred to them as just hootch.

Actually, I don’t think I would tackle this walk in winter, either.

A ‘hootchie’ is a hooded top that renders one invisible to owls.

I would not tackle such a walk in this weather!

Great views. I will take your word for the rest of it.

🙂 Great shots and a nice story – thanks.

Thanks for the great pictures. We are certainly blessed with some great scenery so close to home. I was looking for an out, and your mention of being down on all fours did the trick. Will keep an eye out next time in me Virgin aircraft.

Shaun Hazell - 1 hour ago
Its the most evil way of killing creatures and should be outlawed as it is most countries. View
Cary Elliot Johnson - 15 hours ago
Chele Forest lol. It’s banned in every other Country because every other Country doesn’t have native Australian animals o... View
Cary Elliot Johnson - 15 hours ago
Missy Jangles you do know where the poison is derived from and why it was chosen don’t you? View
News 54

OldMan Wyatt - 8 hours ago
I have always preferred chocolate rather than seafood at Easter View
FishCo Fish Market - 9 hours ago
Thank you for your lovely feedback. Anna truly loves what she does and this will mean a lot to her. :)... View
Michelle Littlewood - 12 hours ago
FishCo Fish Market Thank you for your fantastic service and exceptional seafood. Anna was wonderful when placing my order, an... View
News 32

MERC600 - 13 hours ago
Today the local paper today reports ''The number of patients in Canberra Hospital has dropped in the past day but three remai... View
me heretoday - 15 hours ago
I understand in times such as these that 'needs must' but in all honesty I do not want to die in a tent on Garran oval in the... View
1

@The_RiotACT @The_RiotACT
With empty shelves, panic buying and stressed customers, how are Canberra’s supermarket workers coping with the COVID-19 crisis? https://t.co/cf17uw7t3t (6 hours ago)

@The_RiotACT @The_RiotACT
The Easter weekend is here, and with it the autumn chill. Here are our favourite ways to keep busy while rugged up at home https://t.co/JFivLzP5pT (7 hours ago)

@The_RiotACT @The_RiotACT
A line on the map is preventing Canberra Relief Network food hampers from reaching people in need in Queanbeyan & beyond https://t.co/l2P3WUD7nQ (9 hours ago)