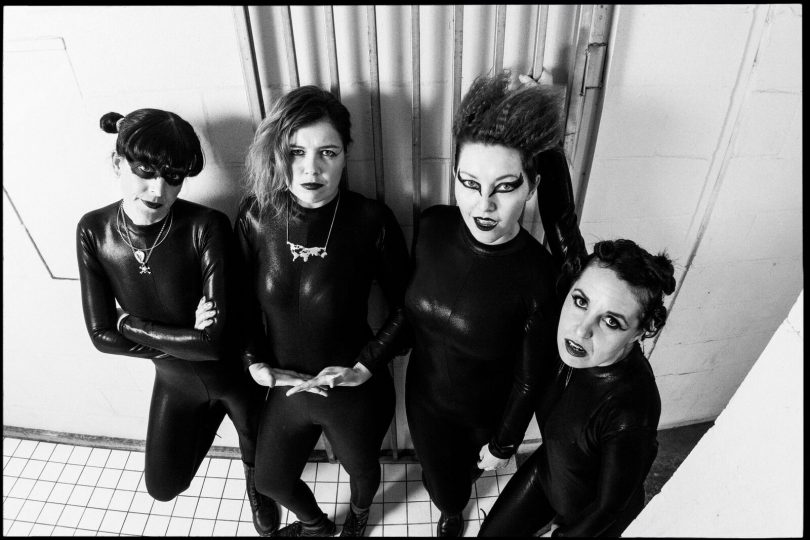 All about the glitter: Glitoris is unapologetic, visceral, and about to give us a taste of their latest work: Photo: Supplied.

If you haven’t met the powerful, politically charged protest band called Glitoris, then let me introduce you.

They are four fearless musicians who are hell-bent on shining a light on political issues as they roar through uncompromising and unapologetic shows covered in glitter.

The band have dropped the first single from their long-awaited debut album – a confrontational song called Spit Hood. It may only be two minutes long but it is a powerful message that will stick with you for an eternity.

The message of the furious song addresses the representation of Indigenous people in the Australian criminal system and how “certain people” are abusing their power in “certain institutions” and they are not being held accountable.

It was inspired, if that is the correct term, by the story of Northern Territory youth detainee Dylan Voller, who was seen in footage aired across Australia wearing a spit hood because it was decided he should be restrained in that manner.

The song is a damning critique of police brutality and failures in the criminal justice system. In Glitoris’ own words, the track is “a raging ‘F YOU’ to those in law enforcement abusing their positions and the authorities who fail to hold perpetrators accountable. A fearless scream for justice in the face of widespread political apathy.”

Ahead of their single launch this Thursday (30 August) at the Basement, Glitoris’ Keven 007 told The RiotACT why a band like theirs is a necessity in the current political climate and the driving motives behind their songs.

“There are a lot of issues that need to be addressed and we are here for all marginalized groups of people. I think there is a really strong need for a voice like ours, so we continue on,” she said.

“I worry for the future. There is so much time being wasted by arrogant BS and backstabbing and there are so many big issues that aren’t being addressed.

“It’s quite heartbreaking really. I stopped reading the news a little while back because I found it all too depressing and it can make you feel powerless I guess. But I like how I have a voice in this band that can stand up and say something.”

The band members are not newcomers to the Australian music scene with all four accomplished musicians previously covering nearly every genre under the sun. But with Glitoris, they have truly found their purpose. Conceived as a one-gig only band performing in nothing but glitter, the outspoken women from Glitoris will let nothing stand in their way.

“We like to go all out with the way we look with a bit of choreography here and there and just punish the audience with our loudness,” Keven said with a smile.

Don’t miss their single launch this Thursday night at The Basement, kicking off at 7:30 pm, with special guests Dalmacia and Lady Denman. Buy your tickets here.

Chaos and uncertainty the inspiration for Small Talk’s lead single